What's the best way to use bombs etc. against bosses

Or is it more sophistacated?

I don’t wait. I fire them all first thing, then fire off all my specials (try to go in with everyone charged), then I hope for some good tiles.

I don’t have the heros to have much of a strategy. Hit hard, hit fast, hope they don’t get their specials off. That is what I go by right now.

Part of my strategy for most events (Epic and Legendary tiers, at least) involves using mana control heroes Chao and Little John to slow enemy specials: 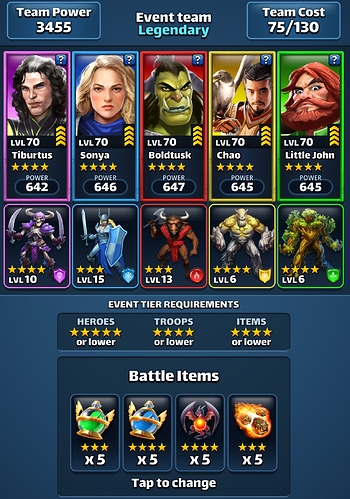 As a result, I do try to stretch out bombs and dragon attacks to get the full benefit of their secondary effects (attack debuff and burn DOT respectively). However, if one of the bosses is getting close to firing a game-changing special and a flurry of item damage would defeat it, I’ll do it.

I stretched them out more in pirates where Lady Locke would dispel the lingering effects, and I wanted them to continue; I think I left two sets for later and used one each time she fired her special.

I bring bombs/arrows since they stack, healing potions and minor antidotes in the challenge events. Stack a bomb/arrow on the boss is around a 45% offense reduction if my pre-coffee math is right(Assuming arrows are a 25% blind so 25% miss rate + 75% hit rate at 75% dmg). I let the effects last the entire times unless using all can get a kill, then I go for the kill. I dispel anything I can the second the boss special goes off because they are killers. I probably used over 100 minor antidotes during legendary tier of Sand Empire and it was typical of every event. Oh and I love Merlin on events :).

@Wharflord Since I started looking at the Leaderboard you were mostly 1st Place in Epic(Beginner), how do you use your items?

Bombs are the easiest. Throw, quickly turn head while covering ears, repeat, often. When there is more monster blood on you than hero blood…
RUN

@Grendoline if you want to know how I use items to do well then message me on line or discord - I’m Wharflord on both apps. I’ll be stepping down from rare now that I’ve won each event once, so don’t mind sharing tips and tricks

Does Beta have unfair advantage in events?