What’s your worst feeling in game?

This happened to me today, I spent HOURS working towards improving my score in epic tier trying to finish top 500. I got bumped out of top 500 with 40 seconds left, and finished on the bubble. Which means 1 place away. 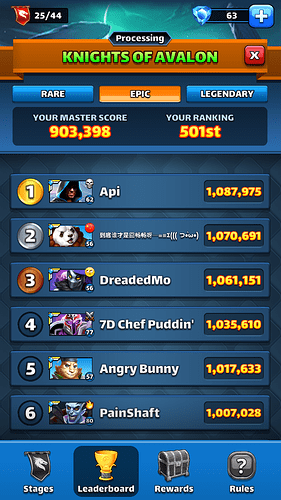 Worst feeling ever had was losing a war by 6 points after I fat-fingered my last raid and cost the team about 30 pts. The entire war loss was on me.

When I sacrificed Kunchen. He was near some Quintus in my rooster. I wanted to empty some space and get rid of 20 classic 5* or so. I let only 2 Quintus in rooster, as purple. By the end, I saw somehow I didn’t pay attention and sacrificed Kunchen too. Well, nowadays I don’t feel so bad. I like facing Kunchen in wars and raids. Actually any slow hero as tank. So I guess I would have not levelled him anyway. But at the moment was a shock. Now, I have all heroes locked. The heroes I need.

A run of bad boards. A bad board every now and then can happen. Just RNG stuff but sometimes RNG can throw up a run of bad boards in a very short space of time. You end up losing most raids and just feel helpless. No matter how good the match up you just don’t get the tiles you need.

Also what I would refer to as the “no chance in hell board”. A board that even with new tiles coming up fails to give you even one match of your stacked color. I have had this only a few times but nothing is more enfuriating than stacking a color and not getting a single match all battle. Again that feeling of utter helplessness.

So in general a feeling that you really just have no control over winning or losing. You pick the best possible line-up and luck just goes against you.

In the same breath - you get a board with 1 move to choose from. Then this continues.

No way to make the board work in your favor this way!!

It turned out unpleasantly. And very disappointing

Dropping a load of cash and only getting 3* heroes.

Mine is when your board that you have been working hard to turn in your favor ends up going topsy turvy because a match you made thinking it was an insignificant one and getting rid of bad tiles, ends up destroying a super bad ■■■ board. This was in an AW round it was only one opponent left, my team was a 4-1 and I was trying to charge everyone up. Mind you this was on a field aid war.

Mistiming the end of a rare quest and missing out on the guaranteed 4* ascension. On a smaller scale, winning 5 or 5 raids then realising i didnt skip the raid chest

Doing embarrassingly too many 10 pulls and 30 pulls in Avalon, Atlantis, Wonderland, Morlovia and Grimforrest, and still not pulling any good green heroes like Alberich, Tarlak, Lady of the Lake, Hatter, Mother North, Evelyn, Morganna de Fey, much less a Guinevere, or a King Arthur, just repetitious tc20 3 and 4* “heroes” and an over abundance of special event 3s.
I’ve never been able to pull any of the top tanks, flanks, or healers
I know RNG is a gamble, but you’d think Small Giant would let us “win” just a little more often to keep us coming back.
Don’t get me started on their stinginess with 4 ascension mats.
The former leader of our alliance finally did the slow-burn rage-quit, come back, quit again thing, screwing us in the middle of an alliance war because they finally beat the care out of him.
I feel gut-sick at the callousness of the developers and the greedy catering to p2w power creeps.
Don’t they know it’s self-defeating to keep souring the milk like this?
Screw the costumes. Buff the odds.
I’ve developed some unexpectedly close friendships with my alliance mates though, so I’m not ready to quit…just yet.

Jeez, another seasonal 10 pul, and I kid you not, I got ten 3* tc20 “heroes”
Somebody please just shoot me

We received a new Titan - a rare Unicorn - and I quivered with my fingers over the display. Bingo, I had to attack the Unicorn with a 4/1 blue yellow team, which was my team for the red TItan beforhand. I had earned far less than 1k points…

Worst was the last few mins in war, zero flags left, enemy using their last flag and then we lose by 1 point! We were all so gutted.

Accidentally leveled up while all my flags were still full…

Not having any new heroes to level. Did 15 summomings on the holidays event and all were 3 stars season 1 heroes.

When every activity in the game has to get through my nearly impenetrable wall of apathy derived from the constant disappointment from RNG results and boredom from the gameplay.

@htower I had a similar experience when I brought heroes that the titan reflected. Big facepalm.