Anyone have a line on who the March HOTM will be? Surprised no one is talking about it. There were threads about Kunchen being the Feb HOTM back in early Jan. Anyone?

Frida has been discussed a fair amount in a couple other places you might like to take a look at too:

How do I find out the upcoming HOTM?

March: Frida, blue Panther (actually, rat), average mana. Her class is paladin. She does damage to 3 targets (higher than Panther, since she is average), blue elemental debuf, dispels and has intrinsic resistance to attack ailments. Elemental link gives resistance against nature. Better alternative to Arthur for raiding (I would still prefer Arthur for titans).

I have seen multiple threads on the March Hero of the Month being a better King Arthur in a sense. I am one scope away from being able to max Arthur. Should I hold out until after I make my Atlantis pulls and use those scopes for Frida (assuming I even get her)? I skipped Wonderland in anticipation of Atlantis this month so I will be able to do a significant number of pulls. I didn’t see this posted anywhere else so feel free to merge this if I missed another similar thread. 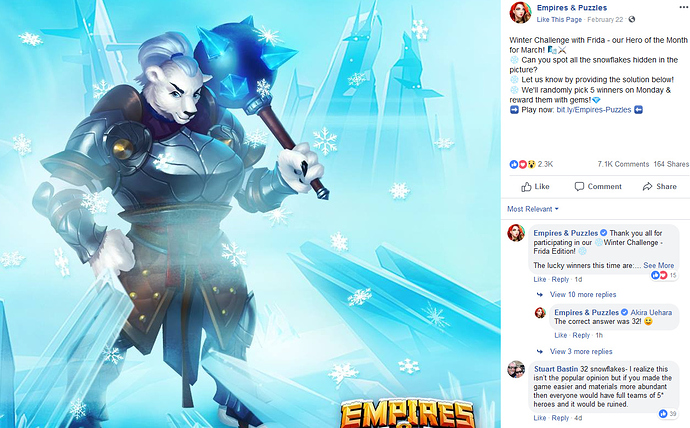 Does anyone know the stats for frida?

Some beta data leaked, but that’s no guarantee that these are the final numbers, so I won’t post them here. The basics were mentioned above. She is the blue variant of Panther and Eve, but with only average mana speed, which would be a big disadvantage if it remains like that.

The February is just too short. We can handle waiting for 28 days

Average speed, but hits harder, is immune to -attack ffectes, and casts an undispellable elemental link buff against nature. This one’s not afraid of Zeline.

I don’t care what she does, she looks so sweet, saving Training heroes for days and hope for summon luck!

Looks a bit like Brienne von Tarth, which isn’t exactly what I would call sweet, but as we know it’s the inner values that count

I want her for my weirdo team, characters that look like or could be One Piece Zoan users, one place is still free to join Chesire Cat, Agwe, Rudolph and Danzaburo🤪

Sweet? I think she’s as ugly as the three vampires from halloween.

But I might try to get her cause I love to fight with elemental debuffs!

You won’t get her for calling her ugly!

Yeah Im not a big fan of the design.

She kinda makes me think of what would happen if Sonya had a phase with being obssessed with anthropomorphic cartoon animals and made herself a animal-persona suit. Lol

idk why I feel this way.

Sne also makes me think of what of been the result of Kung fu Panda if the writers/directors who only had prior experience in making fantasy games were hired for the job instead.

I like some animal hero designa but this one misses it for me. The chest area looks ridiculous to me especially, but I can definitely appreciate how well done the art is.

Back to relevant topics
Im not sure if I’m gonna go too far out of my way to try to get Frida. I’d rather her have nerfed stats (less than arthur’s) a little for a hit-3 with the fast speed. I think those things are what makes Evelyn so amazing in color stacks to me even though how hard she hits in Beta was nerfed a little… her special skill is always ready to go before your other ice heroes or at the same time as them. This way you can always fire her first (without waiting a turn) so you get the most out of your other ice heroe’s follow up attacks.
I like average speed heroes and enjoy using multiple slow heroes if their special skill feels appropriate for slow speed. But the Panther/Evelyn skill is one of those ones that really seem perfectly matched for fast speed in raids and war.

W/ titans it doesn’t matter because of mana potions, but in that case I’d rather save my gems for the next Avalon event

pulled 2 of her with both bonus draws. Not a fan of the mana speed. Took her out as is for a test run on 1-14. She is brutal. Takes a pounding and has a devastating hit. Glad to have her.

I may be of less popular opinion, but I don’t mind her design at all. She’s a polar bear and to her credit she looks well fed (which is more than I can say for a lot of actual polar bears out there

). To me that means she must be a) a great hunter and b) pretty strong to survive out in the Arctic.

As for actually leveling her, I pulled both Ariel and her and I’ve got no scopes so…sorry Frida, you’re on the back burner until 2020.

You dont need Frida to be maxed to utilize her. Similar to Evelyn.