What makes drake fong so good?

I just did an 80 pull to try to get Guinevere
I ended up with 2 drake fong and 1 king author. So im not disappointed with author i could use him.

I have a maxed Joon, wu Kong, jackel and Delilah. I also have vivica at 3-70

Im wondering if its worth leveling drake fong or not? What could he add to my team?
Apperently he is rated higher for defence then Delilah who is my tank at the moment…
Also would you change around my defence team with a maxed king author and or drake fong? 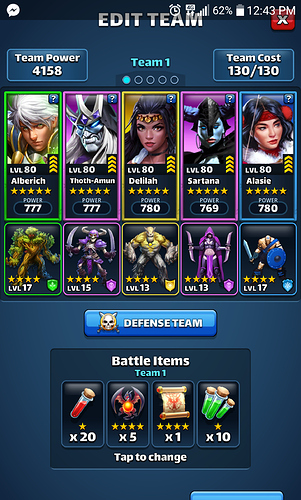 He’s a solid hero. On defense he’s similar to Justice but fast mana. Deals similar damage as Musashi, and the blind effect is deceptively strong.

I pulled Drake a couple days ago and have been leveling him every chance I get. If you dont have any fast yellow heroes…leveling him up. He’s a very good hard hitter

I have Joon and i can’t see when i would use him over Joon accept maybe on defence?

I have Joon also but you have to think about when teams stack purple heroes. By Drake hitting multiple enemies AND he’s doing the same amount of damage on each enemy AND he’s fast mana…you cant go wrong…oh and did I mention blind special on each enemy hit with the special

True so for a raid with 3 yellows who from my team would you sub out. Joon. Delilah or jackel?
Probably jackel?

I’d pick him over joon easily,

Same thing happened to gravemaker when he came out, no one really cared until he’s gone and people start noticing how good he is

So would you pick him over maxing my lv 70 vivica? Considering i have delilah maxed already?

Im gonna have to take a look at him. I got lucky today on a single eoic token and got him today. But i have guin and viv fully maxed so its gonna be hard giving up that yellow spot for him. Def can use for titan and aw, but not sure in raids both defense or offense.

One of my alliance members pulled Drake and Vivica. He has no 5* healers, so I suggested he work on Viv first, which I still stand by. Did I steer him wrong?

Good choice. To go with vivica if he has no other 5 star healer.

Yeah…let Jackal sit on the bench. I have him too but once I pulled Drake…it was sleepy time for jackal

Also, you dont necessarily need a 5* healer to win in this game Boldtusk and Kiril will do just fine

In addition to no 5* healers, he also has no 5* yellows either…

Yes i agree. My jackel is already maxed though. I will level drake after i max my Arthur i just got…
I just feel Wierd using drake over my maxed joon… But i guess he is better for defence then joon… But I dontvknlw wht he is rated better then delilah on defence?

Drake is slightly better on defence…but as far a all around they are about even except Drake is better against titans. …but remember as I’ve stated before…Drake will come in handy just by himself alone with no stacking if you faced a team in raids or wars that stacked purple heroes. Keep in mind that he does 270% damage to 3 enemies and places a blind on them for 3 turns…AND HE’S a fast mana hero…Viv is slow and Delilah is average

I will give him a shot