What is your most number of turn/tiebreaker raid ? (just a competition for fun)

What is your most number of turn raid ?

I will keep this area in the main post for the record holder.

The current record holder is @METKOJAK at 100 turns.

My most number of turn raid is about 50 but I didn’t take the picture. 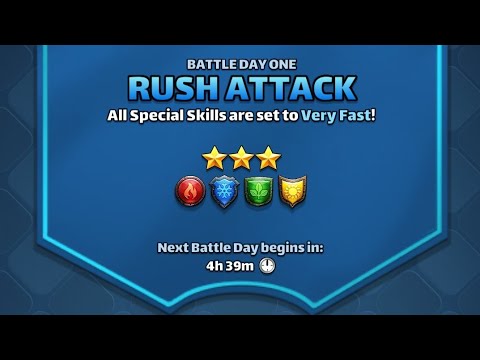 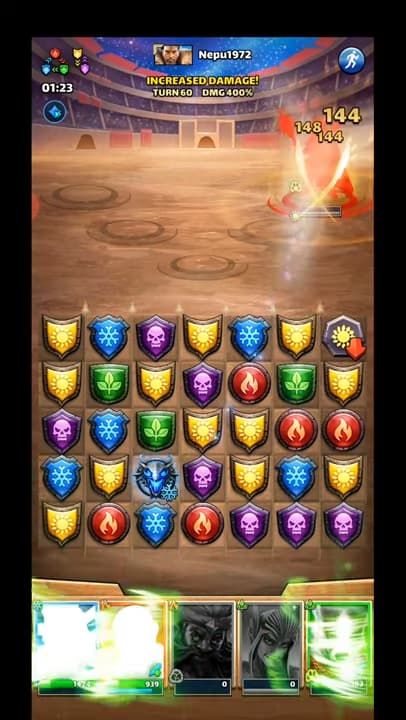 New one for you. Sitting at 64 turns vs a remaining lindenbrock.

Could possibly have continued it for longer but was getting close to an unwanted cascade.

4900tp defence against so not a cherry picked option to try 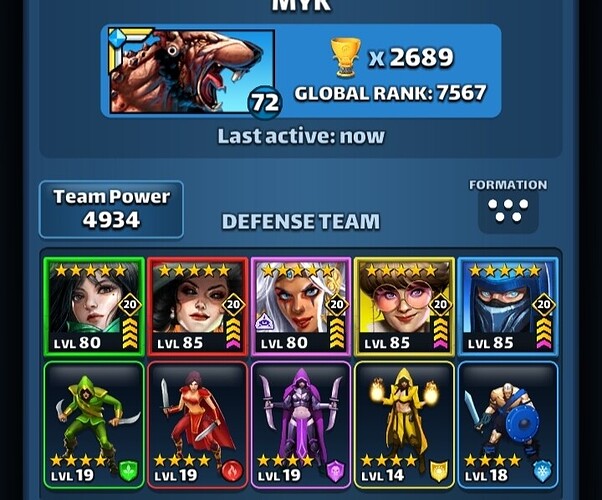 My legitimate longest tiebreaker at 46 turn 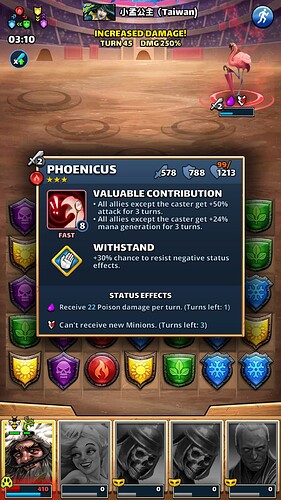 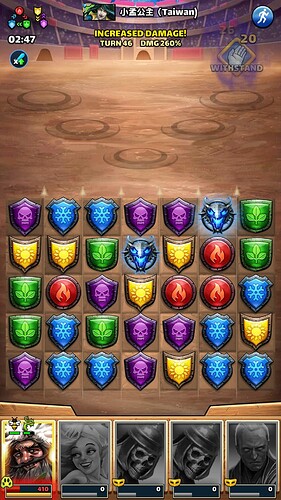 My new longest tiebreaker at 58 turn 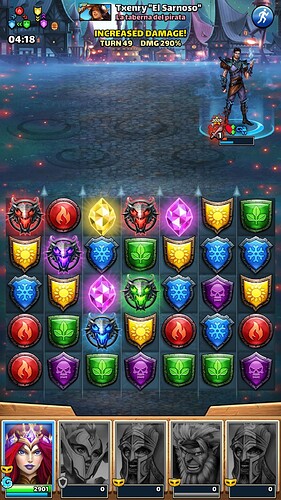 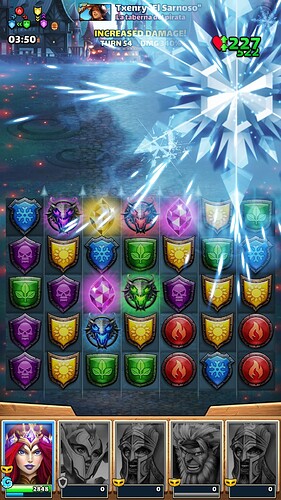 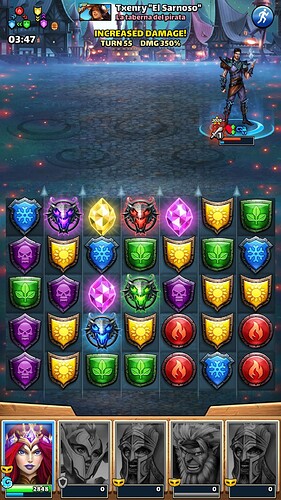 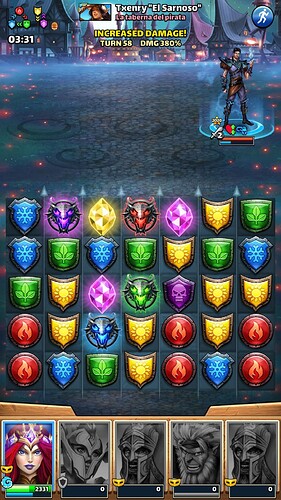 At the end, each yellow tile hit Raffaele at about 1200 per tile

I somehow have a chance to break your record. I try but the board just don’t want me to do

Yeah at that stage the damage per tile is so high need to get really lucky to have either off colour or matches elsewhere. No doubt you’ll beat it soon, but I’ll happily keep the crown just now

Healers only for about 50 turns. I was just hoping I would make it before time ran out.

Four blue tiles did ~300 each on average (picture doesn’t show a few hits).

I found this. High number tiebreaker by @Roland56 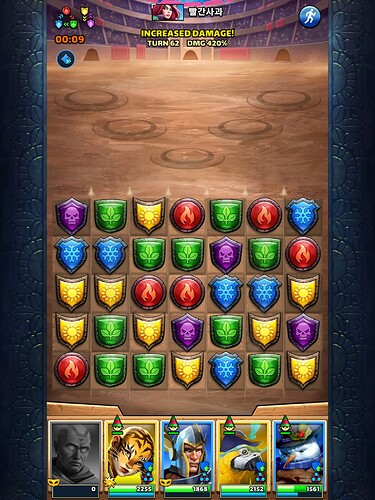 Wow I seem to have 3rd highest turns here so far. This was the team I fought against - 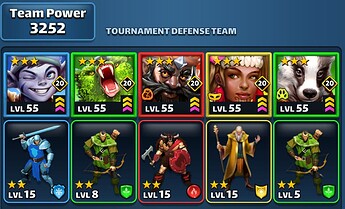 IMG_E42721013×615 96.5 KB
I mean I had to take blues to take out Sudri… What else was I supposed to do? I knew there were 2 greens which I’m gonna be weak against and I did go too passively against this defense, but you never know in these tourneys sometimes. Sudri actually fired twice, so my heroes were almost dead, so I’m glad I took so much support/healers at the end. C Ulmer dying was unfortunate too. Well, and then I realized that I just have to go to tiebreaker to win this. But the SS firing were wasting my time as well.

I got you! 2 seconds and 92 turns. Not gonna lie, Vivica sniping me for 600-700% damage every slash attack hurt a bit and I hesitated to go for the 92nd turn with 7 seconds left. 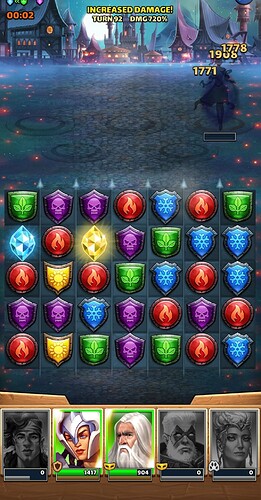 Not exactly a strong defense, but it’s the one I drew.

And with my roster, pretty much any diamond defense is a threat. 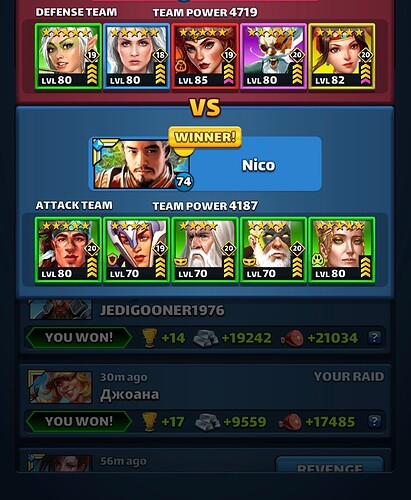 I got you! 2 seconds and 92 turns. Not gonna lie, Vivica sniping me for 600-700% damage every slash attack hurt a bit and I hesitated to go for the 92nd turn with 7 seconds left.

Oh, that is crazy

I didn’t really pay attention, I was trying to play as fast as possible. But very, very hard.

I got a crazy board, wiped out the whole team, kept her alive, ghosted for a billion turns, then she started to snipe all my heroes one by one.

Definitely way more than 3/4 total hp with c Melendor’s defense up. He almost died a few times, but Brynild kept healing him and speeding him up. No way I could’ve done it without her.

I got a crazy board, wiped out the whole team, kept her alive, ghosted for a billion turns, then she started to snipe all my heroes one by one.

Oh, that probably the best way to break the record. It look like you almost reach the limit. It will be great to someone break 100 turn but I think the times isn’t enough

It’s definitely beatable, I didn’t play fast at first. I remembered this thread only after a few moves then started ghosting like crazy.

A healer on the wing really helps. I almost killed her twice, but I threw dead tiles at her to heal her up.

Show your most damaging battle.

For every raid there is a timer that kicks

in and the damage increase that starts to increase.
This is the team that I battled: 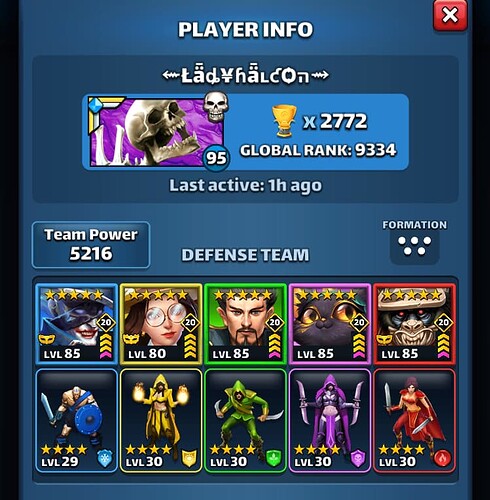 After 59 moves and damage of 390% i the battle was finally finished. 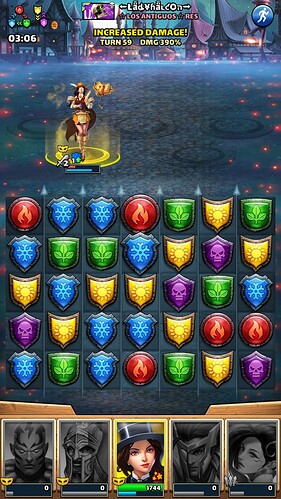 When damage started to increase past 200% it was my viv and Wan. Against cc viv and Finley.

If at first you don’t succeed…

I once won with 00:00 but sadly don’t have a screenshot

@NicoX Your record has been beaten