What is this blurry screenshot of a “Stop Titan” ticket that’s circulating?

Button stop the titan, for when will it be included in the game? Recharge energies to the entire alliance? For the titan to the whole alliance? Could you give some more information?

I apologize, I’m not understanding the questions. (If you are using a translator, it is garbling your words.) 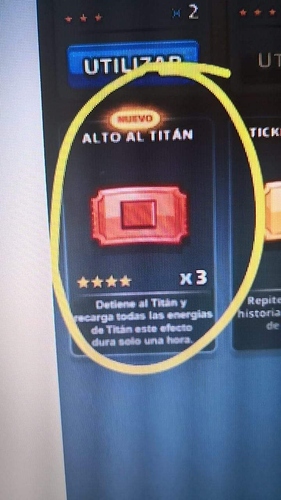 So if my Spanish is up to date… looks like you can pause the titan for 1 hour and recharge your energy, ie: 3 more flags. So it’s a titan flask, with a pause on it.

I guess since merc’ing died, this is a compromise to help alliances finish off harder titans.

What gave you this?

Was this something new added? I’ve never heard of it.

First I’ve seen or heard of I as well

Has it even been confirmed that it’s a real thing, or is it something like the April Fool’s tournament flask?

Why are you asking us? It’s your screenshot.

I haven’t seen anything like this in beta, and nothing about it has been mentioned in any testing release notes.

I’m also perplexed about how such an item would work in practice, and how someone would come to have 3 of them.

I wonder if you can provide a better screen shot… this sounds like a hoax - no?

@zephyr1
What is this blurry screenshot of a “Stop Titan” ticket that’s circulating?
Possibly merge

I initially thought that other thread was a feature request, but now I’m thinking you’re right that it’s a question about this screenshot.

Merged, and I renamed the thread to be clearer.

It doesn’t say “your” energy though? It says “Titan energies”. Somebody with Spanish version of game should see if “energies” wording is consistent with the wording on the flasks. If not it could mean something else.