What Heroes To Use - VS Ursena

Best team to use in both levels would be great to save me wasting any World Energy! 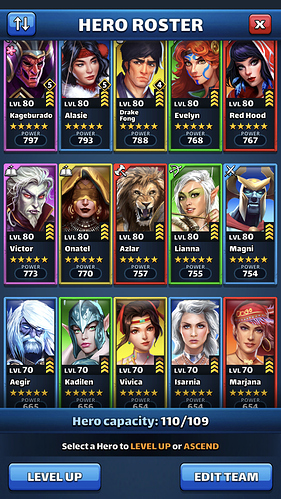 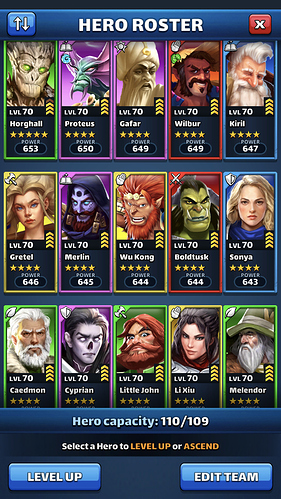 Would that work even though 3 of those aren’t maxed?

Give it a try, since it isn’t really expensive these days.

Best was 4 yellow healers and Wu…

True, no harm in trying

In my opinion Merlin (he is the most important - it’s all about good timing), Gretel, Vivica, Drake and Kiril. I had a bit similar team (Merlin, Kiril, Vivica, Justice, Leonidas) and it was a piece of cake.

Priority to mana controllers, so Onatel and Proteus in. Then bring min 2 healers and a third one or a damage dealer.
Just to let you understand, I did the hard mode with Onatel, Leonidas (mana controllers), Kiril, Boldtusk and Rigard.
Long battle because I was able to make few damage, but Ursenna fired her speciale maybe only once.
Healers are required because in Titan mode she hits every turn unless she’s stunned, and she hits hard… you could use Wilbur to share that damage.
Good luck!

So if i used Onatel Drake (Both for Damage) BT and Merlin for healers and Wilbur for sharing and caring. Or should i swap Wilbur for Proteus

Proteus wasn’t that useful against her, since she charges very slow.

Dark heroes also are weak against her. Took a long time with Proteus and Aeron.

Riposte is cool, since she does normal attacks each turn and hits AoE.

If i were you i would use for Ursena: kageburado, alasie, melendor, Wilbur and Red hood, did not say any holy hero cause wucong die in 1 hit and the others are too low to use, the only one is drake that’s nice and you could use instead of red hood or Alasie, but i like red hood for minions that help at tanking, while kageburado deal tons of damage with his ability.

For the 27\9 i would use Kageburado, wilbur, merlin, melendor and your choise if drake or alasie. Remember to take antidotes for proteus ability (better the small one cause you can bring 10 of them), try to arrive at last stage with all heroes (alive) ready to shot thir ability. Then you should focus proteus with your combos and use specials on Atomos that’s the real problem of the stage. I personally used Elena (even if is an underwater stage) for it’s counterstrike that work very good aganist Atomos who almost kills him self with special and dose not resurrect if die this way, you could bring cipryan for this usage but the difference between him and other 5* is over 80 lvls so i dont know if cyprian is worth enough. Hope that this could help you.

That was close. Lost concentration and lost Kage and Melandor

My first try on hard was a close defeat, too. 2nd attempt succeeded.

while kageburado deal tons of damage

When she comes below 50% health, he will suck and that’ll be a long time.

Boldtusk - Wilbur - Onatel - Gretel - Drake Fong
Use gretel only when you can’t stun her and she is about to cast.

I think this is a solid choice, I used something very similar.
BT-Wilbur-Onatel-Inari-Sabina. Not excited about bringing sabina along, but I wanted more healing and I don’t have melendor still.

Used time stops, as I didn’t always manage to vacuum enough of her mana with Onatel. also used 2 or 3 revive scrolls from unlucky moments, but I blame the cat. Still was a one-shot

Riposte is the effect where an attacker receives counter attack damage. 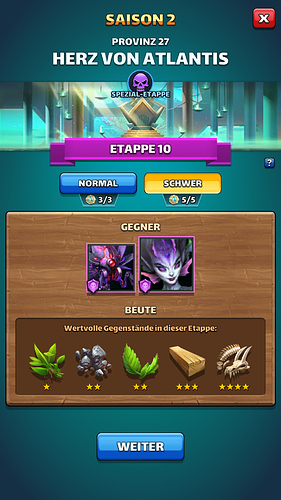 I just did it with:

Withe those three healer it took me around 45minutes to finish, but I never really was in trouble. Just after her first special, as I didn’t expect 700-800 damage for everybody with no defence buff.