What heroes are the biggest disappointment?

Are you using C-Finley correctly? He’s definitely a great hero.

I agree. I usually pair him with Wilbur. The shared damage is considered a buff so C Finley hits all at fast

I have been disappointed with Mr. Pengi. He’s great if there are lots of minions on your team but otherwise his attack is weak and he dies easily. I don’t have good minion summoners which is one of the problems. My current minion summoners are Silvaria and Mielikki. Gonna get Freya in Fated Summons and see if that helps. 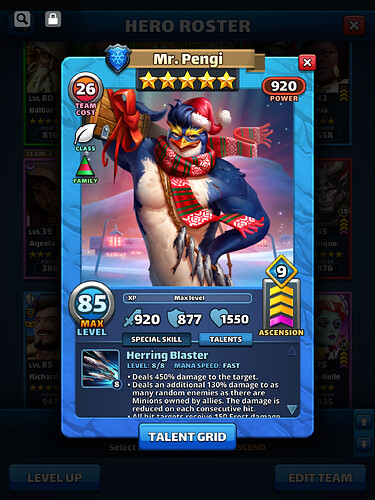 I’m going to add Skadi to my earlier list.

Picked her in a soul exchange but I regret exchanging heroes and wasting mats on her. I used her maybe twice in minion wars, but she’s just too weak and slow and needs the right setup. It’s easier to just bring teams with 3 fast attackers who destroy 3 heroes or even the entire team and not require any prerequisites to do so.

Fenrir is great on red titans, especially when the titan has only half of his life.
And I often use him in wars as finisher.
I think he’s a great hero with his self heal.

I used to use motega and Anastasia on my me pengi team. I could get 10 minions up in 5 holy tiles… o forget who else we in that y’all. Healers maybe…

I use skadi worth costume kiril. Mine is Limit broken and emblems for attack and just doing that, she can kill bera freya minions. If you don’t have her emblems and lb, maybe bring original kiril, costume rigard, and original bold tusk. Barring a ridiculous board… I can usually get a win with her leading the way.

I have all five of this HotMs. Devana and Frosth are always in my first six war teams.
Malicna is in my yellow titan team and sometimes in a war team. Yang may sits at 3/70 and will probably stay there forever. I use Elradir in minion wars: he reflects all damage from ailments and stacks to all opponents. You wait for opponents Skadi to fill her mana, fire Elradir and dump tiles into Skadi. Skadi fires and if your team has killable minions she applies her deadly stacks. Elradir is not affected and reflects the damage. Normally he is the last and only hero standing, winning you the raid/ war flag.

Freya is one of the best on defense. If I get 2-3 ravens on each hero its all but a brick wall

for me, one of the heroes I now kind of regret LB’ing was actually Kara…

Don’t get me wrong, she still absolutely gets good value, but now that I am separately working on c. Black Knight, I am suddenly realising that she tends to get knocked out pretty quickly thanks to no real strike damage reduction. BUT she is a far more accessible taunt hero for a lot of people, so I realise that this is jut my own personal situation.

I am also aware that there are one or two heroes who have featured here that I would have had on my “next to level” list, one of whom is Red Hood (mostly due to missing a red healer) and it’s either her or Grazul… Neither of which is a bad option in my opinion! It really is hard to tell until it’s too late though I find!

Red/fire - Santa, too slow really for what he does and only good is certain circumstances. If only I could take my limit break back. Still use him on occasion though. Ares right there, but maybe should be first. Was using for titan only

Yellow/holy - Guinevere, she just doesn’t do enough in today’s world, and she was one of my earliest 5 leveled, but I didn’t get to experience her in her prime and has been on my bench for well over a year. There are better 4 stars, save your materials

Blue/Ice - Vela, when I got her she was being nerfed like crazy, by the time she was leveled and emblemed she was only a nuisance. If shes all you got, use her of course

Purple/dark - Xnolphod, yup I use Senan more. I found him annoying on defense but not as much as others apparently. I preferred to use him on offense more than defense. Im not saying he’s not usable, but now hes a boring healer and I have better healers. Hasn’t been used since the nerf.

Green/Nature - Telluria, same as with Vela, materials were not abundant for me to level in time to experience the greatness of pre nerfed Telly. Hasn’t been used in years.

Just my opinion, and yes, sometimes you have to use what you have on hand so no judgment from me lol. These are also out of my fully leveled heroes. Guinevere, Telly and Vela haven’t had use in over a year. Wait, Vela once when they buffed her recently, but waaay too late.

You are correct, C-BK is 100 times better than Kara. I stripped Kara of all emblems & never use her.

These days dodge heroes are on so many defence teams, and with the whole “is it reeaaaally only 45% to dodge?” thing, my Finley never hits anybody. I loved him for so long, but now he is basically benched.

You need to build an entire team around her, she’s not an easy hero to play if you want to make use of her mechanic. It’s high risk high reward.

Boss Wolf.
When I got a very slow héro, I thought hé would bé a good tank in very fast…
But even there hé sucks…
He is lucky, I just got my 20th S1 from TC20. So I wont sell hos soul yet.
He has another chance for a buff. But he’ll probably end in another SE

I think they would be Victor and Misandra (this last one I still feel has an issue with her skill).

Bugger me … you’re right … Wilbur works well with C Finley … my apologies all … C Finley is now a supper star.

Head bowed in shame for not knowing.

Lucky I didn’t feed him to SE

I agree. I usually pair him with Wilbur. The shared damage is considered a buff so C Finley hits all at fast

If Chameleon could deal damage!! This hero is relevant but very ambiguous because it does not heal and does not cause damage … it would be necessary for him to improve something for sure … I will not talk about those heroes that they no longer play, they will go to the museum … there is no point in being disappointed with them

Do you even know what that word means?