What Happens When War Ends During an Attack? Do the Points Still Count? [MASTER]

Our war just ended while an opponent was still attacking but he got the points anyway. Is that right?

That last fight might have decided the outcome of a close war. Can you imagine the number of complaints there would be if final battles were just cut off because the timer had run out? It sounds fair to me.

It’s like football or basketball, as long as the play starts before the buzzer it counts

It is right. He started the fight before end time. Let the guy finish it.

I think it is quite fair. You never could know how long the fight will take. We had same once and it was really, really close…but ok from my side to complete begun fight.

Didn’t know if it was another bug or not since I’ve never seen it happen before.

I need some matter to explain - our team in war was attacked by oponent when time of war was gone with two!!! atacks and we lost the victory - how it could be possible!!!

@Krajo I moved your question to a thread where we can help answer it.

It sounds like they must have started their attacks right before the countdown timer ended, and finished them after the timer ended.

All War attacks that are started before the countdown timer ends will be counted toward the final War points, even if they end after the timer runs out.

Tank you for help with this

Apologies in advance if this is posted in the wrong topic but I couldn’t find another thread similar to this. My question revolves around losing an alliance war in overtime. As the screenshot proves, when the timer expired we had scored more points. Yet the game allowed all 3 of those battles to finish (including one that was initiated seconds before war ended) and included those scores in the final tally, resulting in our losing by 18 points. You don’t get extra time to finish a match in pvp so why is this acceptable in war? 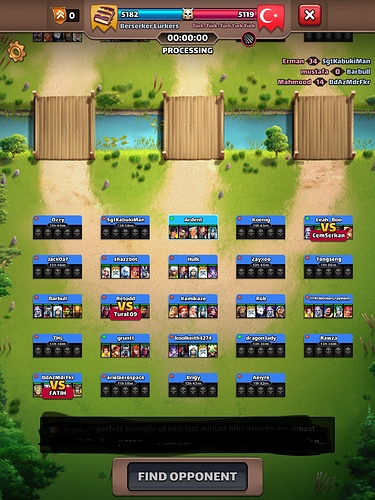 Don’t waste your time editing my words mod. Just delete or hide the post. I apologize that i couldn’t agree with the OP about how “unfair” this longtime mechanic is that allows attacks to finish that were already in progress when the clock strikes 0

I’ll make sure i don’t disagree with anyone again

I’m a friend of such late attacks, but haven’t done it even once.

I think it’s fair, since it is possible for both sides.

Would you also come to ask here, if it were the other way round?

I think it’s a fair question to ask. Obviously the overtime rule applies to both alliances so it could be your alliance benefiting from it next time.

We’ve had this happen lots of time. Rarely on our side because our members wouldn’t wait that long to fight but we’ve had lots of opponents come on with multiple flags in the last few minutes.

The system doesn’t allow for an additional battle after the overtime but existing battles are allowed to finish. This is why I have grey hair and no nails anymore

Probably so since this is the first time I’ve seen this. It just seems like an odd mechanic; maybe I just don’t understand. In pvp when your timer’s up it’s up. I don’t think I’m being a sore loser by asking the question and I’m not throwing shade at the other alliance.

I certainly didn’t take it that way. You had a question and it should be answered. That’s why we have this forum. We don’t want to discourage players asking questions. I’m sure you’re not the only player to question it.

I know the first time we witnessed it we certainly didn’t know what was going on and if the player would be able to keep fighting with the rest of his flags.

If the shoe was on the other foot?
I do agree with rigs/princess
Even though time had run out they was still attacking, Still in there right to finish.
Siht happens don’t worry to much about it.

Did you just call me princess? Gettin my flag out, I’m offended

@Rigs dude come on 1 i never flag do like argument everyone POV I respect!
2 yah cool I like yah!
3 have a snickers