What are the odds of beating shrikewood

I think I used two lots of gems

, but I can’t recall my TP. I think I had two 3*s at the time. Pretty sure I got very very lucky

Haha. Well I did recieve 75 gems today that I wasn’t banking on… so if I have to use them it just puts me where I was this morning before I started the game. Fingers crossed I don’t need em… I’d rather use for a seasonal summon… just waiting for lives to refill so I can go after the last two levels of shrikewood. Used my flask on morlivia before tge event was released

I am probably going to side a bit more on the cautious side like Phoenix Wright, er @FrenziedEye have suggested. But that is because I am playing this game for free (still am, by the way). So to me, Gems are acquired more slowly than if I spend money on acquiring them, in the past, when I was still rolling around with 3^60 4* heroes and 2 3^50 3* heroes on these Rare Quests, I find myself running out of battle aids in the boss battle and constantly presented with the option of whether I want to continue the battle for 75 Gems. 75 Gems can take me approximately a week and change of diligent chest filling, mystic vision viewing to acquire. It is also not every day the devs will give you the apologetic 75 Gems compensation (for the Alliance Wars crash this past weekend). So in those instances I just chalk it up as not being strong enough to finish those events (back in the same time frame, I had enough to beat the 4th level for the 3* Ascension Material, just not the last one with the 4* Ascension Mats).

The suggested power level offers a fair assessment of how much power level you might need to clear the stage, it is not indicative because through careful playing and items management, you can certainly hit above your power level. So it does look like you have more higher leveled heroes at your disposal than I did when I was struggling, but if you find yourself constantly needing to heal after a hit or two from mobs, and can’t heal quick enough that you have to dip through your items, it might be a sign that you might be under powered.

Then inevitably come the continue for 75 Gems decision, are you confident enough that you can finish the level (hopefully on the boss level) given your revived HP (items are not regenerated). I’ve chosen to forego the level 4* mats each time to save my Gems back then, because truthfully, I didn’t have any 5* heroes who would’ve been the only ones benefiting from those material). But that is just me.

I’m in agreement with you. I’ve mainly been f2p so I’m (usually) very frugal with using gems and battle items. Currently I’ve got VIP running to speed things along (certainly helped me acquire most of my current 4*s) so will have to see how much boss life is left before I’ll sac gems. I know the items I want will come up again. Not too fussed. Mainly want to be able to say I pulled it off.

I’m gonna give it my best shot and see what happens. Maybe some luck with boards and what not will be on my side. If not,

happens. Won’t be the end of world.

Definitely some very good suggestions to try out.

The way I see it, you might have a hard time with the final stage. This forest quest is green monsters all the way… And you are not doing very well on red heroes. Three offensive reds, a healer and a spirit linker and it wold be a walk in the park (or the forest in this case

), you wouldn’t even have to use battle items except for a few mana potions to keep the spirit link up.
The thing is, if you will have a hard time with Shrikewood, advanced Morlovia is way harder to beat.
You got a great roster there but you need to start thinking about some serious grinding to get those 4* to at least 3/60. I guess you are not doing very well on ascension mats, are you? Still, Wu, Kiril, Rigard or Colen are great heroes. You should find a way to ascend them. Adding Cademon to that mix would give you a solid platinum rainbow defense.

I’ve been grinding away, but needed a change/challenge and these came up…well shrikewood did. Morlovia advanced I’ve been waffling about. But after reading this post Is it possible to finish the Advanced Event Return to Morlovia with only 4* heroes?

I figured I had a shot. So far I’ve made it to 13 using only mana potions and maybe 1 health potion. Wu Kong is helping a lot, but needs more leveling and ascensions. My main goal is the orb in morlovia. I’ve got 3 but need the 4th. “Lucked” out with colen yesterday on the seasonal pull but red is definitely lacking for now. If only I’d been more focused when I started instead of getting drawn in with shiny things I can only imagine where I’d be. But then this last few weeks has been the most fun I’ve had with this game for a while.

Agree, we F2Ps should avoid gem spends. I was a bit desperate /naive in my earlier days.

75 gems is like 1/4 of a summon. It is practically 1/4 Ulmer or equivalent most of the time.
In this Game no matter if f2p or not the most scarce resource are ascension mats and you should try really hard to take on every chance to get them. Even if you spend 150 on the last stage it is way more than worth it.
#mypersonalopinion

the most scarce resource are ascension mats

If you are guaranteed to get the ascension mats by all means spend gems. I wouldn’t hesitate either.

What @Shohoku79 and I probably have in mind is the situation where you are faced with spending gems in a “less than or equal to 50% chance of winning” situation. This situation is probably more likely with an underlevelled team.

Makes sense. There’s no way I would spend the gems unless I was almost 100% sure that I’m gonna win.

Well… feeling pretty confident on shrikewood (hope I’m not hexxing myself) but as soon as I have the 20WE, going for it. Managed last one and only used 1small mana and 1 health (don’t even know if I actually needed it, I panicked lmao) 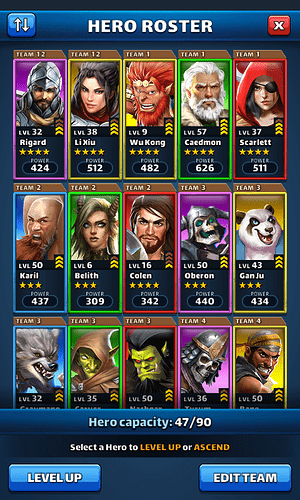 Now for Morlovia. As much as I want to complete it I’ll still be pretty stoked to beat Advanced 15. Once WE replenishes on to 14.

ESBAM thank you for your help I was just wondering, what’s the best way to level up my people same element or same person ?? Thank you

10 of same element each time should be fine. DO NOT feed 4* heroes to others unless you have too many of one.

If you are upping 4* heroes, even if the skill dont up a few times also doesnt matter. You have all the time in the world to max the skill to 8/8. Just keep using the same element each time (10x each time).

No problem and exactly what @AirHawk said.

I would just like to point out that it is not necessary to feed 10 feeders at a time - when you are feeding a rainbow team (one of each colour), it can be a problem having enough slots to have that many feeder heroes at the same time… (extra slots can be bought and will be necessary at some point, yes…).

For my part, I usually just feed away my feeders as soon as I have somewhere between 15 and twenty - so there are usually just 2-4 of each colour. And it works just as well as any other method. The only heroes one has difficulty taking to 8/8 are 3* - and there is no foolproof method for them. As for 4* and 5* heroes - due to many experience levels they need to climb, their special is usually not a problem to maximise.

I know that it is widely advised to use 10 feeders of a colour at once - and it definitely isn’t wrong to do so; I just want people to know that it is possible to max your heroes using your feeders as they come.

Thank you Air Hawk I want sure if I was Cristos to feed them different elements, I have been beating my levels, its funny I know you guys are probably like level 100s but my stronghold is only at 6 lol! So thank you for your help.

Everyone has to start from somewhere. Just take your time and learn from the forum.
Alot of useful tips and try to ignore the rants.