Waffles tends to provoke this kind of reaction. I’d follow him if there were a follow option on this damn forum.

This thread needs to hit 100 posts or @Petri wont be able to buff her.

As someone who doesn’t have her, I am happy that she is poo.

I understand that anyone would be disappointed if she were the 5* that dropped out of that portal, even limit broken her attack is only barely above a thousand.

Who would want a hero that could hit for a ton only after destroying all minions in 9 yellow tiles?

Six tiles, I would pull for sure.

But I suppose they could start at just making her fast, and I could watch some videos to see if that was enough.

Also, please buff director Zuri and Milena. With these new heros getting higher stats, no one I can think of needs buffs more than them

Eloise needs a buff like 400% hit all and fast mana

I think with eloise talent has to also be taken into consideration.
25% chance to deal 15% extra damage per active buff the enemy have.
That can be quite a devastating hit when it all falls into place.
The rest of the time it’s not far off killhare damage.

This thread is a dumpster fire. Y’all are giving me headaches

I don’t know what dumpster means, does it mean people are being sarcastic?
I thought it was strange when people were saying she needs buffing. I mean she’s not OP but completely useable.

I agree. She’s a very good hero. In the last rush war she made an incredible work at offense even being at 3/70 and helped my team to win 17/20
I can’t wait to grab 2 more darts and max her

Is there any buff Eloise thread?
Look at Dewana! Eloise should be buffed too!

I think Eloise is very niche and useful, as is.
Her minion removal and subsequent minion blocking is a very powerful special.
There are certain defence teams which i would not be able to take on without Eloise.

So what about Penolite then? Her hit is even softer then the one of Eloise and she does not remove minions. Better buff Penolite!

Think about it this way… Removing one wave of Minions is aproxamately worth 200-500 Damage each. Combine that with her 300-400 Base damage she hits for 500-900 x5 and disables new minions.

Exactly, with one hit i have removed 10 hulda minions…its equivalent of a 6000 hit on it’s own.
Plus you block new minions. Potentially another 3000hp of minions blocked, all with one hit.
And that’s before the direct damage

and the removal of counterattack from w3k minions! She is very useful. 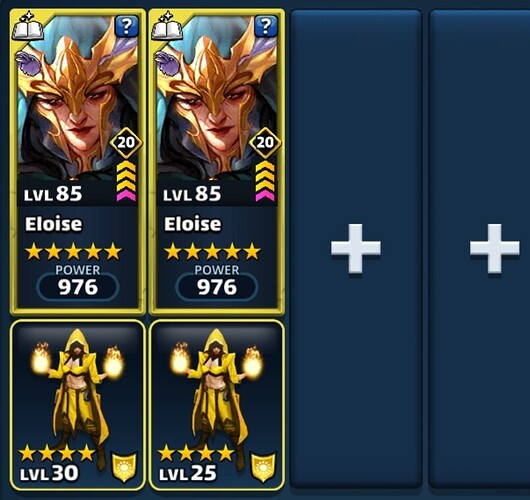 This brought a tear to my eye.