) or Battle item targeting and harpoons in Santa’s Challenge

Use harpoon before, or after, damage sharing enemy buff.

([Warning!, Tip, Danger!] The Old Moderator and the Sea (apologies to Ernest Hemingway and @Kerridoc ) or Wilbur and harpoons in Trials of Piety)

With 1* to 4* Battle items, targeting is not a problem since they attack all enemies.

But harpoons only do damage to target, and are often thrown by a drunken Santa, or at least a drunken A.I.

Unlike special skills, it is not enough that you pre target Mother Frakking North with a targeting circle.

Unlike titans, there are 3x boss targets for the harpoon.

Unlike 1* to 4* battle items, harpoons only damage one boss ( remember to use before, or after, enemy damage sharing buff ).

If you have fought hundreds of the “90 seconds of terror” known as titan battles, your muscle memory will be to tap the harpoon and then tap the harpoon description box that pops up.

I will have to ask a good friend of mine, but if I recall correctly, tapping the description box will randomly target a boss, so only a 1 in 3 chance of hitting Mother Frakking North. All I know is, twice I screwed up and immediately tapped the harpoon description box, ruining that run, and losing 16 world energy.

I got lucky with purple power shards, So I only needed 375% of the 550% in mana items I brought. Most were used on Proteus 4*+18 to keep minions from being summoned.

I got lucky with combos, so I only needed 2x Dragon attacks and 4x harpoons to defeat Mother Frakking North.

Without Mother Frakking North, Buddy, and then Santa, were defeated by my team.

Advanced Stage 24 of Santa’s Challenge took 6 minutes and 45 seconds ( on the third try ) with my messing around with a new strategy and the following 2x purple, 2x red team

how many maxed 4*/5* healers do you have? Bring them all.

Kill the mob waves without spending any items, using many healers is the key.

Santa & MN should be dead by then while Buddy will be left with small ammount of HP, kill him with your heroes/puzzle.

I was wondering if this was a bug. I brought harpoons on my weakest account during the last stage of Springvale. I had the target circle on Killhare but the harpoons hit Roosterly over and over.

Maybe the issue is I clicked the description box, assuming it would hit the target and not a random boss. Good to know!

twice I screwed up and immediately tapped the harpoon description box, ruining that run, and losing 16 world energy. 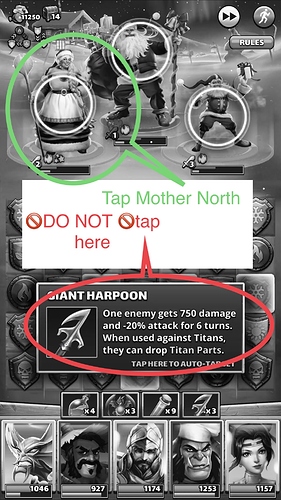 I am not the only one:

yeah looks like she wasn’t clicking the specific hero again after selecting the item. and AI was randomly picking who to hit instead.

I still wish they improved 5* battle items instead of nerfing them.