We started this war with a war score of 425k, same as our opponent. 30 teams each side. Nothing has changed, team or member-wise but our war score is now 413k and theirs is still 425k?

What could have caused a large drop like that to our score, I’m curious to know.

Has anyone left the alliance?

Nope, nothing has changed. We still have our 30 members. We always take a screenshot of our war score and the opponents roster before each war.

I just checked again and we were the same at the start.

I’m not complaining if it means we get matched with a weaker opponent next time!

EDIT: I just had another thought. Perhaps one of our members has opted out of the next war but they haven’t told us yet.

I’ll update this post after the war to see what’s happens for our next war.

Our war score dropped about 30k mid war, then later last night, it jumped back up.

I have no idea what would cause that.

I feel better knowing that. Maybe it’s just a funny blip happening. I’d be more concerned if one of our members has opted out without notifying us.

Without someone leaving the alliance, I have no idea how war score could decrease once the battle has begun. Maybe it has something to do with exactly when the win/loss modifier gets applied?

EDIT: I just had another thought. Perhaps one of our members has opted out of the next war but they haven’t told us yet.

That was my first thought. If you are all about the same power level you can test it by opting out, and then checking the score to see if it changed about the same amount. But don’t forget to opt back in

I watch our war score quite carefully so I know a large drop like that could account for it. It’s most unusual though for a member to not give notice before doing it.

I know this thread is a little old, but this just happened to us, too. We were matched against a team with a virtually identical war score yesterday. Now, halfway through the war, their score is up by 17K whole ours is down by 18K. So there is now a 33K point gap. I can understand theirs going up by leveling, etc. But how would ours drop like that? No one has left the alliance.

Last week our war score jumped in the middle of matching for no reason. We lost war Our war score dropped. Now today at 6:13am matching was happening and our war score was 49558 now at 1:17 today it jumped again to 51128 with no new members no one joining war or anything! screen shots below with time stamps for today. Why is our war score jumping a large amount to match alliances we shouldn’t be matched with. The only Conclusion that makes sense is in the wording of the war score. War score adjusted based on past performance of Alliance. Meaning the alliance as a whole based on cups raids titans defeated and escapes. 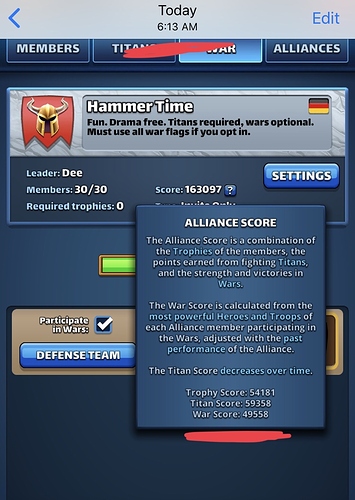 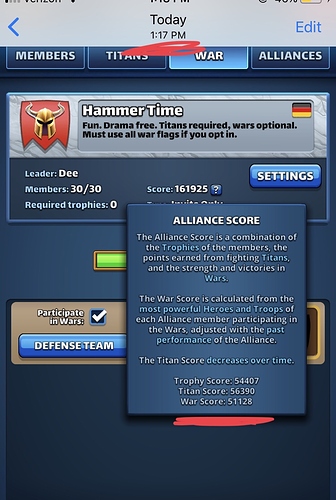 That is a difference of ~3.5%. not sure I would classify that as large or the root cause of any significant mis-match. The phrase “past performance” is related to past war performance. Raid, titans etc are not part of the war score.

I run a training alliance and our matches have been killing us. we recently had a few ppl graduste to our next lvl alliance and the war matching has really been discouraging a lot of my new to war players. I wish our war score would just plummet but it isnt dropping even with the last 4 major losses. Should i just create another alliance and move everyone? Its a trsining alliance so it wouldnt be a huge titan *drop

Technically any alliance will have a minimum war score composing of their heroes and troop strength. The other factor is war history. If the proposed solution to war shuffling has yet to go live it’s possible to reset war history.

Should you? Effectively your decision.