The last 2 wars we have not been matched evenly. Our team is at 79k and the other team 93k…something is soooo wrong with this picture. We spend money pn this game yet we are in there to have fun for ALL our alliance members…come on dev…level out the playing field-!

Can you post screenshots of you and your enemy team’s Alliance Scores?

How on earth can this be a fair matchup… 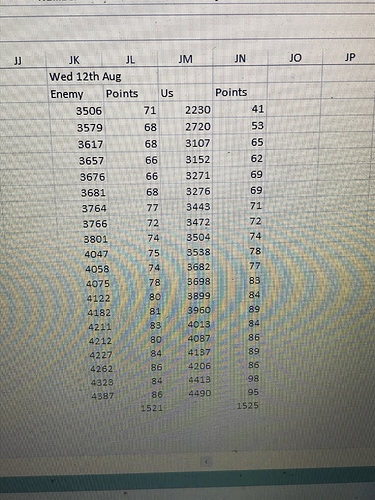 Because it does not matter what they have in defence. It matter how they are effective in attack. 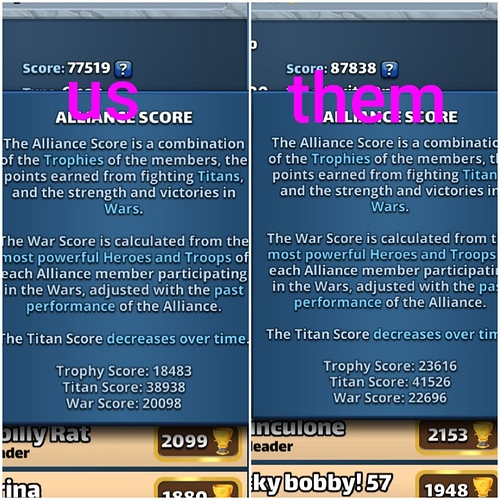 My alliance vs. opponent:

Lastly… let’s look at number of days in current alliance.

My alliance vs. theirs:

I really don’t expect the situation to be addressed anytime soon, but I’m going to continue bringing it up every time it happens anyway.

By the look of the way that score appears I would say there was less in it (the AW) than you realise. They have already numerically won but are just using flags for POV points; I will have no part of that silliness.

While the average Def team difference is not massive, the player level difference is huge, so second half of the war their likely much deeper bench will show.

Hope you can defy the odds

Yeah, it’s not the defense power so much that worries me… what worries me is that it’s going to take our lower level guys 3 flags to score the same points that our opponents will be able to score with 1.

Seriously, my lower level guys still use 3* heroes for their lower flags. Not saying it’s impossible to take down a 4k+ team with 3* heroes, I’ve done it before… but doing it with one flag? Every time? LOL

Thanks for the support! I’m hoping some of them forget to log in for the second half.

Thanks for the support! I’m hoping some of them forget to log in for the second half.

And then you scrape through for a win, only to face an even stronger alliance next time

I’m currently in a 9 person alliance too. We have 4 in the L50s, and 5 L40±2. Our lower level folks work so well with us to clean up and try to maximise alliance score but the wins when the opposing side have flags unused is bittersweet.

We recently beat a team that had 23 of 56 unused!!! They were significantly more powerful on paper and had they used their flags we would have likely been decimated. Instead that happened the very next war

Sounds very much like my wars! You’ve likely faced some of the same opponents we have.

Yeah, I was wondering about that. I’ve only been active on the forum for the last few months and have been taking extra notice of many of your comments as your situation is similar to where the alliance I’m in is at.

So many times I’ve read your comments and wished I could give more than one heart!

If you ever get drawn with The Dancing Salamis then please say something on the forum.

Pretty sure I would remember a name like that

Most of our opponents have been Russian teams with names I can’t even begin to try to spell or pronounce.

EDIT: just found you. Your guys’ war score is way higher than ours, so it’s not likely we’ll ever end up fighting each other.

Probably due to the fact that half of my warring members are still far below level 40.

If you’ve been tracking things for so long, then you should be aware matchmaking isn’t based on alliance score or titan score. Personally I think some assumptions can be made of an alliance’s strengths based on those, but they’re not used for matchmaking.

As for the jump, how many members in the alliance? The jump could be explained easily by more of their members opting into war after matchmaking is confirmed. Another factor is a lot of leveling up (though hugely impractical it’s not impossible).

As for others, keep tracking the war score. The devs are adjusting the algorithm from being an alliance metric to a player metric. It should lessen the war shuffling issue, though I can still imagine some ways to exploit it it does mean a lot more work to do so.

War score should barely move at all during the war. Maybe a couple hundred points at most.

@ThePhilosopher
Thanks for the link will follow that one
Well aware that the war score is the only one that matters but you said
“The jump could be explained easily by more of their members opting into war after matchmaking is confirmed.”
But I can only see the war score AFTER the teams have been announced and the details of the matching process say that only players that are in the alliance at the time that the matching happens are included
So if a new player joins after your opponent is announced they are not included in the war score and therefore the figure should not change
Or am I missing something

Wow, another war and another mismatch, our opponents have a team score 600 points better than us and their defence teams are so good we stand no chance. Come on devs play fair. Please have a look at how you pair teams. Looking at 5th defeat in a row. We are trying!!!

I’m with you… and we haven’t even used most of our flags yet. But I’ve seen the opponents one shotting us one after another. I know we won’t be able to one shot most of their defenses. So we’ll likely use all of our flags, score 4000 or so; they’ll leave 20 flags unused and still beat us by 1000 points or more.

I’m still going to try. We all will, hopefully. We’ll try our hardest, and we’ll probably lose in spite of our best efforts because we got steamrolled by the unfair matchmaking system.

Anyway… I expect this thread will probably be merged soon… just wanted to let you know beforehand that it’s not just you guys.