Instead of using hero power to match alliances.
Why not come up with a new number or letter system that represents how usable each rarity tier is in comparison with each other. Similar to Anchors grade system but much simpler. Instead of looking at specitic hero stats, it just looks at level and tier.
Example:

Simple easy way to do matchmaking in my opinion. Takes a lot of the variables in other numbers and formulas out of the equation. Just use that grade system strictly for war matchmaking(has no relevance to how good or rare a hero actually is as far hotm or event or special skills etc)

Then match alliances based on the number of heros they have in each grade. Can still use top 30 or use whole roster whichever would be more accurate. Could convert the letters to numbers if it would work better in the system

This system would still match by hero power, it just calculates hero power in a different way (using an arbitrary grade tier instead of an arbitrary number). Is there any reason to suppose it would be better than the current system?

Cause hero power counts different things than just based on stats like the following images: 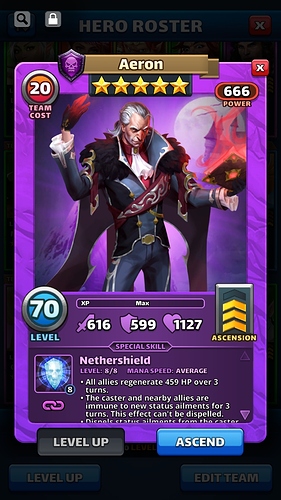 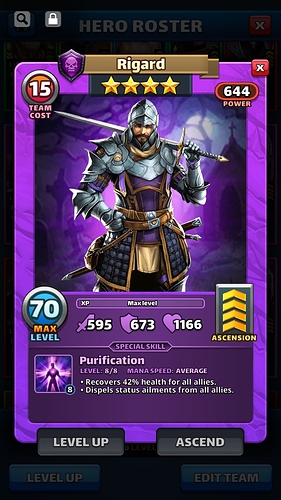 Aeron new power rating at tier 3 lvl 70 is 666 but still shows he’s more usable in matchmaking than a maxed rigard which isnt the case. Rigard is much more useful if u base it on stats alone and special is similar just doesnt have the same perks as aeron but those perks dont matter if he’s dead which happens much quicker than rigard dying.

New grade system wouldnt take special skills or hotm or any of the other crap hero power does into account. At the end of the day a maxed 4* rigard is more useful than a 3rd tier 5* aeron and this is the case for most(if not all) 4* and 5* heros

Ok. Kind of expected that. Although i seem to notice most people i talk to using maxed 4* over tier 3 5* so just thought it was an issue that could be easily resolved with a simple solution instead of the over the top complicated attempt at counting every variable in a single hero into a 30 vs 30 180 heros vs 180 heros matchmaking system. My bad. This number would just be used for matchmaking by the way if i didnt make that clear. A grade that would reflect progress basically.
Players with 20 A+ rating heros, 15 A heros, 10 B heros would be matched with those that have a similar count. The hero power level i guess could reflect the same thing but i doubt it does since it has more calculations into it that can provide more inaccurate results once averaged out over 60 rosters of 2 alliances. Wasnt necessarily suggesting “new” system i guess, just a simpler system.

But you have made viable points. Now that i have 30 tier 3 5* heros, i guess my 25 maxed 4*are obsolete so will go ahead and eat all except 5 to complete epic events with. Thanks for the info Brobb.

Keep a few extras for Titans, and don’t throw them away if they have unique specials that aren’t available from 5* heroes. That aside, go for it.

I’ll be sure to share this advice with others. Let them know how big of a waste 4* are to level or use rare mats on. Thanks bro. Idk why i thought 4* had value. Guess the game really is p2w after all lol

Get to TC20: you’ll be showered with 5* heroes and you won’t need to pay a cent for them.

Showered? Lol where have you seen those results?

So you’d expect to get about twice as many 5* heroes from a month running one TC20 as from a 10x elemental summons.

(And if you run four TC20 constantly, then you expect to get about three 5* heroes each month. That’s what you’d expect to get from about 80 elemental summons.)

Lol to each their own

@ThatGuy: Your way of spending money to get 5* heroes is the most efficient way. But you will have no choice but to be patient for the ascension items. At the end, I think spending cash or spending time to wait will bring almost similar result of a max level 5* hero.

I’d rather have the devs spend time on an ELO or other experience-based war ranking that creates a ladder, rather than another attempt at changing how heroes are measured. Only by looking at how effectively players used their heroes, individually and as an alliance, will war matching be truly fair.

What we have now is like trying to guess who will win an auto race by looking at the maximum torque and RPM of each engine, ignoring the skill of the driver and pit crew.

Yup. In my opinion that’s the best way forward, and maybe the only way with a high likelihood of improving on the current system.

U can buy mats…already have 10 maxed 5*and counting(some just waitin on me to click the button). Only been playin a year. I know some peeps have more in same amount of time but idk any f2p with similar numbers as they shouldnt but still