In War Equalizer I noticed that when Queen of hearts activates de taunt via the card minion the equalizer does not remove de taunt.
On thias topic I searched the forum and answer was that the taunt was attached to the minion. Not a buff attached to hero…
Now I see that Liu Bei also gives minions that provide a counterattack to the hero but in this case the equalizer removes the counterattack.
Question… Shouldint both work the same way?
I beleve Liu Bei was a bug on the Equalizer War.

I’m pretty sure because the Queen of Hearts taunt is from a minion and Equalizer doesn’t reset minions of fiends. Hopefully someone can confirm this.

Shu minion gives it’s owner counter attack, which is a status effect. Queen of heart’s minion is the taunt.

The counterattack from Liu Bei is also from the minions. Thats why I think it should work the same way.

On the card from Liu Bei it is not called a status effect. It is called an ability… And acording to my knowlage taunt is also an ability that the hero gets.
In both cases ut is coming from the minions and in both case only if the minion gets killed the ability gets removed/dispeled.

Wording on QoH:
“The Playing Card Minion gives its owner Taunt.”
That’s all. It doesn’t mention whether it can or cannot be removed. This is probably because the minion constantly reapplies Taunt.
For fiends and Wo3K minions this is different. They do not constantly reapply their effect, this can also be seen for example when a Monk resists the ailment provided by the fiend then it will not be reapplied on later turns.
I agree that the wording could be better but I think these are different mechanics.

Wording on QoH:
“The Playing Card Minion gives its owner Taunt.”
That’s all. It doesn’t mention whether it can or cannot be removed. This is probably because the minion constantly reapplies Taunt.

This is what is funny… as Liu Bei’s card explicitly says it can’t be dispelled.
That aside, it’s been a while since I’ve seen Queen of Hearts, but when she fires, does she actually get the taunt buff symbol? If not, then that’s the difference. As she would get the taunt effects while the minion is there, but it’s not a buff that can be targeted. I think it would be similar to Hulda’s minions giving health even if all the other associated buffs are removed.

Edit: Just looked at some youtube video, and no, she doesn’t get a taunt buff when her minion is out. She does get the defensive buff though which I assume would be removed during the equalizer war.

No there’s no symbol on QoH. There was a recent discussion on this too.

Basic rule of thumb OP is if symbol, effect removed. If none, stays

Take a look at 1:30 min mark.QoH fires and she gets a minion and def up buff. She does not get the icon for taunt. Basically, the minion is the one who really holds the taunt buff. 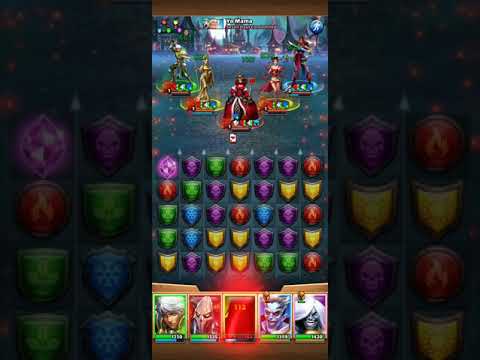 Thank you all for charing your opinions.

i disagree with the notion that the fact that the Taunt given by the Playing Card minion is tantamount to not counting Queen of Hearts’s Taunt as exempt from Equalizer.

as far as i’m aware, Taunt is the only status effect that has two indicators normally associated with it: the red dot icon on the hero overlay and the faint red circles around the hero with Taunt. it’s a loophole that Queen of Hearts exploits.

meanwhile, in the case of fiends and their respective ailments: there is only one icon for each ailment (Hannah’s attack down from the Golden Idol fiends, Elizabeth’s mana degeneration from Spider fiends, etc.), so Equalizer removes those ailments because it can remove the icon; there is no second icon tied to the fiend that protects the ailment from Equalizer the same way Taunt has two indicators.

it is my opinion that there is no discernible difference between Queen of Hearts and all the other effects caused by minions or fiends, including the text on the cards themselves; even Elizabeth says “the fiend gives” the owner a mana slow ailment, similar to Queen of Hearts’s card saying “the Playing Card minion gives.” i am in agreement with the idea that this is a bug and either Equalizer should not remove any buffs or ailments tied to fiends or minions or that Queen of Hearts’s Taunt should also be removed.

Inari and Red Hood both “apply” their minion’s benefits each round (healing and mana) without having a symbol on them either. If QoH minion applies it constantly there isn’t an animation showing that it is applied each round like Inari and Red Hood have. Seems like Liu Bei should be similar to the other three and have it reapplied as long as the minion is there. And QoH should probably have her animation adjusted to show it being applied. This would make it all consistent. Or wording probably needs to reflect that QoH’s taunt is on the minion itself and change wording to show that equalizer then doesn’t effect minions.

I totaly agree with both of the last comments… It is not clear nor consistant with other scenarios.

If this would create a new category for minions and even fiends with effects this would really change the dynamics of war equalizer and add a lot more value to certain minions and fiends. Could definitely see an argument for using Red Hood and Inari more often.

While I think the language is ambiguous, I have no problem with QoH’s minion giving taunt and not being dispelled. I also believe it’s working as intended.

A similar thing happens with Hulda’s minions. They give two buffs to their owner, mana regen and defense up. Besides, they heal their owner, but this effect has no icon. Equalizer will erase the two buffs with icon, but those minions will keep healing their owner.

It’s arbitrary, but it’s ultimately the developers’ vision of how certain things should work.

Well, no one (at least not the majority) has a problem with the fact that QoH’s taunt is not dispelled as it’s a property of her minion.
However, what the actual problem is is that the wording is inconsistent.
Even Hulda is a good example, her SS reads:

This can be simplified / normalized to “the X minion give Y effect for its owner”.
And QoH’s SS reads:

To me, this fit to the normalized form of this kind of effects. So why does it behave differently?

On the other hand, Hulda’s minion’s healing reads:

And in this case, it’s totally clear that it’s an action of the minion each turn.

In my opinion, QoH’s taunt ability should be worded something like this to keep it as it currently is:

Again, in this case, it would be totally clear that the taunt is a property of the minion and not a status effect on QoH herself.

To me, this fit to the normalized form of this kind of effects. So why does it behave differently?

In fairness, QoH is an older hero and I think the first that had this sort of minion. They decided to reword the newer ones, but never revisited the QoH description. Should they? Probably. Will they? Unlikely, though they may surprise.