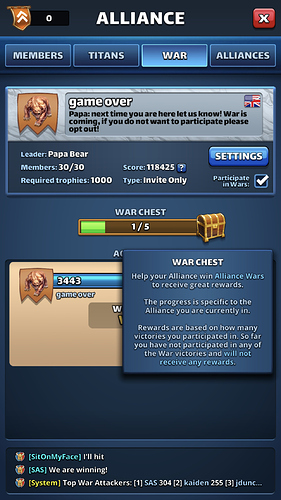 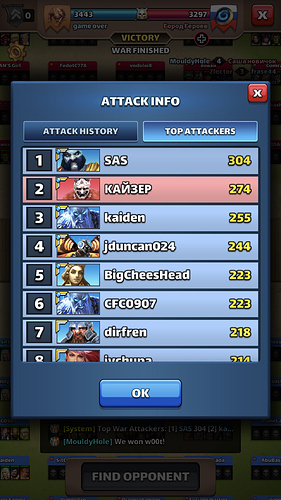 Lol it’s 1/5 dont you see. You have to win 5 wars
Ah u mean the last sentence. It didn’t update ok

Read the text box, it’s says I haven’t participated when I clearly have

Did you exit from the alliance after the war was over (and then rejoined it?)

If you did, this is what I would expect to happen based on the latest discussions: War chest reset

Did you uncheck and then check again “participate in wars”?
My other odd guess would be a bug affecting only the top scorer.

Edit: But it works properly for the others in your alliance, right?

Mine also just showed that I had not participated in the war - which I did… I wanted to take a screen shot for Support and changed the language to English - and then it showed correctly that I did participate. I changed back to the original language and now it is correct there as well. So try that…

So the error is showing in alternate languages?

Might also be a refresh problem. @sas if you start the game again does it show correctly?

No, after I switched to English and then back to German, the German version is now also correct. It originally showed incorrect in an alternate language, but I don’t know if that is the case for the others that have experienced it. Others in my alliance had no problem with the alternate language - it was correct for them.

Hmmmm! One puzzle piece any way!

Please exit, then reopen your Alliance view and it should update the information. This is a known-issue. Visual bug only, so the War Loot should be counted correctly.