For the third straight war we are fighting a alliance with at least 9 4000+ defense team (last one was 14) and we have only 1 4000+ team. The combine defensive strength of the opposition is almost 5000 greater than our alliance. That wouldn’t even bother me except for us to kill their 4000+ teams we get only 56-57 points, but their strongest player 4100 gets 60 points for killing our 3700 player. The alliances both have 28 teams, so there is not an imbalance to account for. How are stronger teams getting more points for killing weaker teams then our weaker teams are for killing their strongest players. Also why is war score changing after matchmaking and allowing 15K difference teams to be paired together?

Please see this post for an explanation of how war points are allocated. If you have any questions after that, I’ll do what I can to answer them

There are 1500 points spread across the allies. Those points are distributed with 500 points going out pro rata and 1000 points divvied up by the HP of the team. To keep the math simple, in a 10-person alliance each team will be worth 50 points plus their HP-share of 1000. If everyone has equal health teams, therefore, each team will be worth 150 points (100 + 50). As @General_Confusion notes, the strategy you saw is a sure way to lose. Most people don’t know about the fixed points and think th…

I wish they would post the formula for how the hp points are distributed, but the post doesn’t explain how this happens.

Points are allocated on HP, not Power.

but we dont know how hp are calculated and distributed, and how would a 3580 team have anywhere near the HP of a 3960 team?

Sorry if i’m coming across as yelling, I’m just trying to figure out how the wars have gotten so skewed? Plus i’m a stats person and this formula doesn’t seem to pass muster imo.

also, i really do appreciate your time listening and explaining this to me.

Some heroes like Gormek and Gobbler have gobs of HP — more than many maxed 5* — but way less Power. Also choice of troops affects things. 4* crit troops bump,up HP, while 4* mana troops do not, but they both add the same power.

You can see the HP of heroes, as adjusted by troops, in the war battlefield in those green bars just above each hero, e.g. 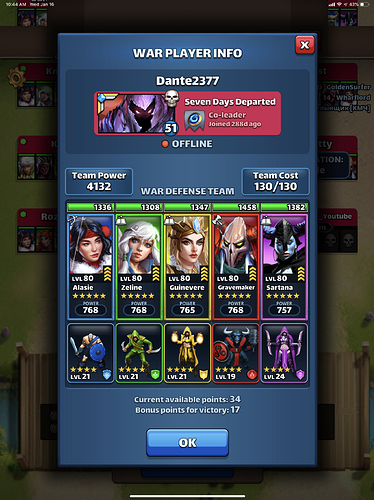 A post was merged into an existing topic: Alliance War Disconnect or Getting knocked off while doing quests or raids

Your hero’s have 3 intrinsic stats that you can direcly observe by clicking on them:

Troops modify all those stats, so there will be an increase over what’s on the card when the hero actually appears on the field. But as Kerridoc says, you can read off the current HP for each hero in the green bars on the battlefield.

TP is the stat that’s harder to work out, but Kerridoc has done a simple linear regression that’s not bad:

The thing to note is that each point of defense adds twice as many TP as each point of health. So the effect you’re seeing is actually to be expected. Heroes with high health and low defense will have lower TP than those with high defense and low health. But high health/low defense teams will be worth more war points, because points are distributed on health, not TP.

great explanation both of you. now i have lots of calculating to do the balance our our alliance. lol

The strategy for the advanced user is: for your weaker teams, if you can fill roles with high def/low health heroes, you’ll make things as hard as possible on your opponents. For instance, lower TP teams should prefer Tiburtus to Grimm, and Grimm to Gormek, within the Ramming Pulverizer trio. Tibs is the stingiest in terms of war points for what he brings to the table.

this will be helpful to at least modestly offset the awful matchmaking we’ve been dealing with.

Points are rewarded by hp, not power. Please refer to this post. Hope it helps.

There are 1500 points spread across the allies. Those points are distributed with 500 points going out pro rata and 1000 points divvied up by the HP of the team. To keep the math simple, in a 10-person alliance each team will be worth 50 points plus their HP-share of 1000. If everyone has equal health teams, therefore, each team will be worth 150 points (100 + 50). As @General_Confusion notes, the strategy you saw is a sure way to lose. Most people don’t know about the fixed points and think th…

Merging with an older post discussing the same topic.

Was the player you hit FULL??? As never hit???
Also it matters NOT the team power. But has to do with health