I second your suggestion! Sounds good to me.

The need to assemble sets is part of the gating mechanism. If you’re going to bypass that, there ought to be a cost. If it was 1:1 then I’d add in some gem cost for the exchange.

I’m willing to pay something else, but not two ascension items. I sweat too hard to get them, I’d resent it if I had to pay 2:1.

Make it cost some exorbitant amount of iron as an addition to 1 for 1. Not too painful, but could be a fine slowdown.

2:1 ratio would be a bit much… But just gems or iron would be too little of you ask me. If it took 50 leather armor in addition to a warm cloak to trade for a hidden blade - there would still be a time gate as farming enough materials for the trade would require spending energy.

Then for higher level, say mysterious tonic, you would have to get 50 Chainmail shirts and a royal tabard. Then farming 8-7 wouldn’t be enough either and it takes more energy flasks or time to accomplish.

In my other MMO “BoH”, people didn’t understand ascension materials ( enchantment flux in that game ) when the game first started so they badgered the Devs until you could combine two ascension materials you didn’t need into one ( 2 flux into 1 of the correct color ). Later the Devs unveiled 6* heroes ( second enchant slot ) and all the players exploded "Why did you let us get rid of those ascension materials, we really really need them now for our 6* tier 2 ascensions ! "

If they let us combine 2 for 1, I am personally not using it.

I personally don’t care for another version of the forge (lone player activity) preferring something the alliance players can share. But I like this basic idea. Instead I would create an advanced building called a Mercenary Guild. At Level 1 you would unlock Quest: McGuffin. The McGuffin would be a 3* Ascension item. The McGuffin Quest would run just like the rare quests (example Frostmarch), but be visible only to the alliance. The entire alliance could participate in the McGuffin Quest. To …

Yeah, that’s why I shall cling to my 1:1 ratio (pooooossibly allowing another resource to be added).

Only in your game. I have more shields than I can use. I’m playing the version of the game that shorts you Capes.

I don’t know the state of your stash, but 7 months into the game, farming various stages pretty regularly, I have 35 chainmail shirts.

So I’m definitely very much against this kind of pricing. It would only add to frustration of rolling other kinds of not needed mats from every level you farm.

Sorry, I’m only 98 days into the game… And in total I’ve only accumulated 25 Chainmail shirts. My point though was that aside from quests, and the very very occasional elemental chest… The only thing I spend red flags on these past two months is stage 7 of province 8.

By including Chainmail shirts, tall boots, scabbards etc into the equation it would force a greater variety of gameplay into the community and make the later provinces less of a one and done deal.

Plus keep more of the time restriction in play because those very items and stages take more time to spam.

Id go for a trade type system. I got no need for 627 rugged clothes. Maybe add in a pawn shop type of thing that many other RPG games have.

Well, 12-9 is the best province to farm those items as far as I know, which is no different than farming 8-7.

But I’d also absolutely hate to have to grind higher levels that cannot be auto-played. Auto-play alone is boring and a hassle. I would not spend my time repeating mindless map levels ad nauseam to get X of some item. Blergh.

Watching the auto play gives me a headache, unless I’m time constrained on lunch and have to eat, or my hands are full because of the one year old… I avoid that function. Not only does it go quicker when I choose the matches but the specials make sense too.

As far as not wanting to grind that option already exists… Just wait for rng. As far as solutions to rng - there is only grind, and pay to win. The latter would kill the fanbase of course, so I guess you’re advocating for no change?

Cause let’s be honest if there’s no pay to win, no grind, and rng have everyone just what they wanted so we all had maxed 5* hotm teams… Would you still play then?

Yes, I’m advocating for no change when it comes to farming aside of auto-play being done invisibly. I don’t want to have to keep my phone up and keep clicking every few minutes to farm it again.

And I sure don’t have the time to grind it by hand. Ever. It’s mind-numbingly boring and I’ve much better things to do with my time.

I couldn’t care less about the specials being used right. I just wish I could press a level, it asked me if I want to auto-combat it, I say yes, I get the display of the loot. No waiting for the game to play through it if it’s a level my chosen team can complete without a hitch.

So no change when it comes to farming, but you get all the ascension materials you need when you need them?

Basically you just want rng to give you all the 5* hotm and everything to level them and everyone else should have them too… See my first response in this thread.

It’s a game - if you don’t want to play it, if you just want instant gratification, why not find the title more suitable to you? I think that mystic vision showed me an angry birds version of this game.

Correct, but advocating for a simple 1:1 ratio is the exact same thing as just saying “gimme the mats I need and now”…

Iron isn’t any type of time gate, even a mill in Iron can be acquired in a single day by raids… And since no one averages a 4* material a day, it should be glaringly obvious how that’s not a solution at all.

Gems could be a time gate, however they are super easy to just, yknow purchase… So again not a solution only a way to make pay to win easier.

Which brings us back around to my suggestion. By using items like Chainmail shirts, tall boots, and scabbards as part of the equation not only does it provide a use for items laying around waiting to be used… But forces those interested in not waiting for the right materials to drop to actually farm higher provinces.

Again the three options are grind, pay to win, and wait for rng. Waiting for rng is the current system which started this thread of complaints… Pay 2 win breaks the game… And you don’t want to grind (unless you’re changing your position).

Basically this game is not for you, or you aren’t here to complain about rng at all in which case I misunderstood.

So then you’re basically telling most of the people in this thread the game isn’t for them. Including our moderator Rook

Na, it is a game for whoever finds it fun. And if they don’t find some elements of it fun they can come to the forums and advocate for change. That’s how it works.

When it comes to your points I was addressing MANUALLY grinding. You said you’d like higher provinces to drop better stuff and to that I say HELL NO. Cause I have better things to do than manually do the lethally boring things in a game.

But if you think that gating ascension items by province drops is any better than gating them by gems, well, no. Energy refills aren’t that expensive, players who dump hundreds of dollars into the game will certainly get as many shirts as they want.

Yes, that’s kinda what my first response in this thread was all about. Advocating a change isn’t a problem but simply asking for them to give you a 1:1 ratio exchange without any effort put into getting the rewards is the exact same thing as simply asking the devs to no longer use rng and just give you guaranteed rewards. If you can clarify how I’m mistaken in that assumption, please feel free.

And I don’t want people who enjoy the game to leave, just the ones asking for a free handout. My wife and I have each spent 70 bucks in the game because we recognize the work the devs have put into it. In our opinion is it is worth a new release price, but we can’t afford to give them any more money. All that aside people asking those who have assembled such a great game and deserve respect for doing so to forget their livelihood just so we get the electronic appearances we prefer is rediculous. As a gamer base we have to be willing to sacrifice one of two things - time or money.

No one wants pay to win, but taking the right away from people to pay is an incorrect move altogether. Your point that people can spend money to get red flags is made moot by the fact that still isn’t instant gratification. They have to invest time after that point in order to still make progress, which is why my suggestion even has room to stand on… Otherwise I simply wouldn’t have made it. To point out the difference, people who buy gems can also buy iron the exact same way they buy energy… But iron creates instant gratification which is disrespectful to the developers. They want to see people enjoying the game, and while rng isn’t perfect it is the most fair way to achieve the balance between f2p and p2w, and why even though it causes disputes it is going to continue to be the chosen method by developers.

And to make things clear, I wasn’t at any point saying autoplay should be removed or was a bad feature or anything. Those that enjoy autopsy should use it, but since you brought it up - I’m one of those players that can’t stand it. That was my only point on that matter, I’m not asking for any change regarding that and since it’s quite fairly off topic we would best let it go.

You said you’d like higher provinces to drop better stuff and to that I say HELL NO.

I’m missing the point where I ever said this, so if you don’t mind quoting where I misled you I would love the chance to elaborate. 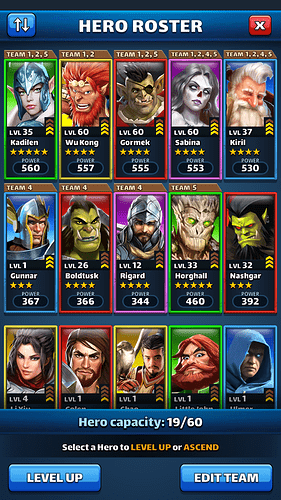