I know this is a roll the dice game. But the amount of complaints, and proof of inadequate rewards is beyond showing.

At $120 in the game, i gotta ask. Is this just in hopes that people will spend more money?
My friend put 180 in the game. Is on week #3 with no chainmail shirts. He farms the same level i do. I get them all the time.

Now, im absolutely shafted on ascension materials. Conveniently missing things i need, but my other friends have them, and im farther progressed than them. I battle 8* titans vs their 4*.
Repeated “rewards” that only give basic items i could create in less than 5 minutes. Why defeat 40 heroes in gold rank, if i can make them in 8 minutes?

These “random chances” need work. I feel as if its pointed towards cash spending. And i know im not alone. I will not wait a few months on materials to build heroes i paid for.

I’ve spent quite a bit in game and have the same issues getting mats as the F2P. I agree it doesn’t really add up that I will be swimming in some mats but never get ones that I need. The same goes for ingredients. It makes me wonder if the rolls are truly random. I have played for a long time and have done everything possible to try to speed up receiving mats. I skip as many chests as I can, watch all mystic visions, top scores on 10* titans, and have even tried my luck with no avail in buying the mats I need from the shop. If it was truly random it doesn’t make sense that I would get 3 times more of a couple 4* mats than another. Seems like everyone has that one mat they never get. Mine used to be sturdy shields. Now I get them all the time but can’t get a tonic to save my life. Mats are definitely the most frustrating part of this game and eventually will probably be the reason I stop playing. It is really upsetting that the devs stated AW was to help with the lack of mats and then the rewards are worse than titan loot.

They don’t listen to this kind of problems. Missing rewards is the key to make the game slow and keep a balance between f2p and p2w. If they want to make money they make many offers with ascension materials but they don’t. So you have to live with that… This is a game to play for fun, because you don’t win absolutely nothing in 98% of the cases.

You may know this so I apologize, but I think that the rolls are truly random. However, when you have very small chances of getting many different things, you will naturally have shortages. I apologize to some for the math but I did this so you can reproduce it. I took something that has 1 in 200 chance and saw how many of these items you would get after 1000 tries. As you can see, there is a fairly good chance you will have between 2 and 8. If you look at the game, having more or less green and other color heroes will create differing demands for items. With so many items available, shortages will inevitably occur in some areas. 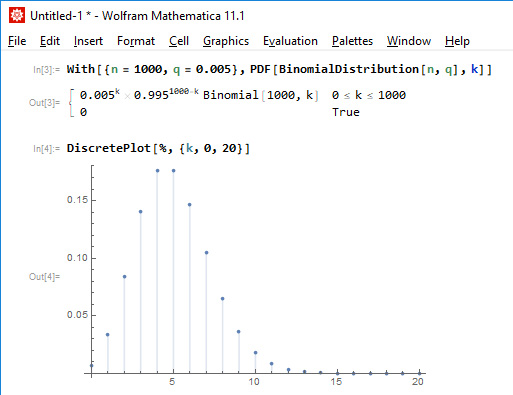 All of these games count on these shortages, and because we will all have them we spend money to buy what we are short on. The 4* ascensions are the least common items and will have the most variation. The rare quests seem to be a constant regular source of the items and will dampen the variation, but as with most things, waiting for the rare quests takes a lot of patience.

P.S. OT I work @ UCLA and I’ve known for a long time that I’m at most a distant second to a really leveled person who was or is associated with work.

I don’t honestly get these complaints… Maybe it’s because my gaming background. I still remember the days where I had to wait between 36 and 60 hours from the last time a particular monster died, just to try and kill it for a 2.6% chance at getting a particular item, just so I could gather 2 more to upgrade my equipment. And that was in a subscription based game.

Hate to put out bluntly, but if you want instant gratification this TYPE of game isn’t for you… End of story. If you don’t put in the time and hang around you won’t see your heroes maxed out. They don’t have to fix the rng to make you stay, it’s just how it works.

Thanks for the response and it does make sense that there will be some variation due to the small percentage chance of getting something. Since the game thrives on need it wouldn’t make sense to make items readily available, I get that too. It just seems odd that many have the same struggle for the same items. Could there be different odds of getting say a sturdy shield vs an orb? It would make more sense to pick one or two 3* items and make the odds of those harder to get so a team is always in need. Even with the “epic offers” I feel like those offer the same things or certain ones are only offered to certain people? Seems like there is a reason behind that as well. The rare quests are what I rely on. With time I know I will eventually get the items I need if I am willing to wait. I guess it’s a question we need to ask, is the game still fun when it’s just grinding and not getting the rewards to advance? I’m loving the new content of AW. It helps me not feel so tired of the mundane. It also makes me miss those mats even more though so I can stay competitive for my alliance. Well done on the devs part for making a fun but yet frustrating game

Just my opinion, I think the developers inadvertently made shortages in sturdy shields by making crafter tool ascension packs that excluded them, then did not have them on the first two challenges which have been repeated more than once. They did make it up a bit later but I agree that the sturdy shields (and perhaps a couple of items like telescopes) seem to be more rare. We could imagine some nefarious plot but I think the devs are so busy with new features that they have little time (and probably no desire) to try to create additional shortages.

I haven’t had a shortage of sturdy shields yet, but am desperate for magic orbs and trap tools…

I know others in my alliance are desperate for compasses, which I also have never had a lack of… so I don’t think there is anything really in shortage, it just doesn’t deal out the materials equally to all players, which is probably just completely random…

All of these games count on these shortages, and because we will all have them we spend money to buy what we are short on. The 4* ascensions are the least common items and will have the most variation. The rare quests seem to be a constant regular source of the items and will dampen the variation, but as with most things, waiting for the rare quests takes a lot of patience.

Devs could remove ascension items and increase XP needed to level. My “Other” F2P MMO does this.

Not only does the variation cause shortages & surplus ( zero sun stones for 18 months then 3 in 2 days and 8 in one month ) but the addictive rush when you finally get the last telescope keeps you coming back for more.

MMOs need a grind, grinds need gambling rushes. Otherwise they would be electronic jig saw puzzles, one and done.

Maybe it’s because my gaming background

Wait for the reset, join the raid, kill the boss hoping for a 2% chance drop, see “your drop” taken by a guild mate

So there are two distinct ideas going on in this thread. Let’s unpack them:

Issue 1–Mat frequency
Ascension item rarity is a gating mechanism to keep the game from being completely P2W. Buy enough elemental/event summons, and you can almost surely get every hero you’d like. F2P use what they happen to get for heroes. So F2P can use their rare mats to power up better heroes that a typical F2P, and pair them with better troops.

But…ascension mat scarcity means that P2W aren’t ascending heroes at 2x or 3x the rate as F2P. Maybe a bit quicker—their better teams fight bigger titans, and they buy the occasional offers with mats—but not a lot quicker. This gives P2W and edge without making F2P irrelevant.

(Players are usually on a continuum—there are “spend a little” accounts that probably account for a hefty % of SG revenues, who are closer to F2P in game dynamics.)

Issue 2–Mat distribution
UCLApack can’t get telescopes, but has other 4* mats she doesn’t need. (She’s in my alliance.) She’s “won” the Issue 1 scarcity rolls, but had a run of bad luck on which particular mats she’s pulled.

What’s needed is some game mechanic that allows players to exchange items for similar items—the Alchemy Lab or similar. Swap two mystic rings for a telescope, or two orbs of magic for one trap tools. Or something!

I second your suggestion! Sounds good to me.

The need to assemble sets is part of the gating mechanism. If you’re going to bypass that, there ought to be a cost. If it was 1:1 then I’d add in some gem cost for the exchange.

I’m willing to pay something else, but not two ascension items. I sweat too hard to get them, I’d resent it if I had to pay 2:1.

Make it cost some exorbitant amount of iron as an addition to 1 for 1. Not too painful, but could be a fine slowdown.

2:1 ratio would be a bit much… But just gems or iron would be too little of you ask me. If it took 50 leather armor in addition to a warm cloak to trade for a hidden blade - there would still be a time gate as farming enough materials for the trade would require spending energy.

Then for higher level, say mysterious tonic, you would have to get 50 Chainmail shirts and a royal tabard. Then farming 8-7 wouldn’t be enough either and it takes more energy flasks or time to accomplish.

In my other MMO “BoH”, people didn’t understand ascension materials ( enchantment flux in that game ) when the game first started so they badgered the Devs until you could combine two ascension materials you didn’t need into one ( 2 flux into 1 of the correct color ). Later the Devs unveiled 6* heroes ( second enchant slot ) and all the players exploded "Why did you let us get rid of those ascension materials, we really really need them now for our 6* tier 2 ascensions ! "

If they let us combine 2 for 1, I am personally not using it.

I personally don’t care for another version of the forge (lone player activity) preferring something the alliance players can share. But I like this basic idea. Instead I would create an advanced building called a Mercenary Guild. At Level 1 you would unlock Quest: McGuffin. The McGuffin would be a 3* Ascension item. The McGuffin Quest would run just like the rare quests (example Frostmarch), but be visible only to the alliance. The entire alliance could participate in the McGuffin Quest. To …

Yeah, that’s why I shall cling to my 1:1 ratio (pooooossibly allowing another resource to be added).

Only in your game. I have more shields than I can use. I’m playing the version of the game that shorts you Capes.