Mystic vision keeps freezing up the game. Is this a new addition to good ole v48?

No. It happens to me once a week for the last month or two.

and again. It’s hard to recreate because I haven’t seen a pattern in what causes it.

QoL improvements are definitely lacking in this update.

They buffed penolite and gailard status. Aren’t that super exciting and needed? you guys complain too much

You could learn some Swift code and teach them a thing or two on how to properly integrate iOS webview controller into their game. Or Java for Android. That’ll show 'em for sure!

Excuse you, animal heart kid was my absolute favorite!

… ehem, there I go dating myself

@Petri something is still really unclear in this.
The first bullet point says “Stoneskin decreases by 10% at the end of the turn” but the last sentence then says “Stoneskin progress resets to 0% at the end of the turn”. Which one is correct?
Maybe both if the second sentence only applies when the Stoneskin reached its maximum but it’s not really intuitive worded that way, it should be made more explicit/clearer. And also because it works differently than the Slayer’s rage that does not reset to 0 when at it reached its maximum if I remember correctly.

I am interested in seeing what changes will be implemented to ths Sand and 3 Kingdom heroes. Also excited for the gargoyle heroes, I’m hoping to get some (or all) the 5*s.

I was thinking a legendary token would be the same as an epic topic except if would give 3 or multiple pulls at a portal (kinda like how the legendary tome of emblems gives more golden emblems compared to the epic one) but I would prefer the other suggestions where it’s a guaranteed 5* (and hopefully works in seasonal too).

I’m curious about the Play for the planets could be, hopefully we’ll hear something soon about all of this

I can’t wait to hear about this summer solstice. I don’t know if I’d want it to be another Black Friday event but I would prefer that over another portal, I feel that we are becoming saturated with too many heroes now

@Petri something is still really unclear in this.
The first bullet point says “Stoneskin decreases by 10% at the end of the turn” but the last sentence then says “Stoneskin progress resets to 0% at the end of the turn”. Which one is correct?
Maybe both if the second sentence only applies when the Stoneskin reached its maximum but it’s not really intuitive worded that way, it should be made more explicit/cleare

If the Stoneskin meter reaches 50%, then at the end of your turn

I have written a bit about this here:

I think the release notes is still not completely ok as I remember that the Stoneskin buff which is activating lasted for 1 attack for me in Beta and NOT 3 as what is mentioned in the released notes.
So I have asked them to check it and correct me or the release notes: 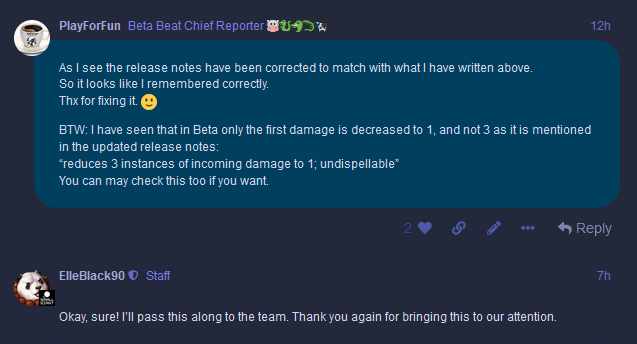 I guess you’re going to be Bitter towards me for the rest of your life lol
I never claimed im a e&p programmer
I studied programming in the university i worked as a programmer for a company for some years
You dont accept my opinions about the game its fine i dont care …move on
I muted you and yet you kept picking on me whenever you found the opportunity
Mute me…jeez!

Pretty anxious to see what they will change in WO3K heroes. Changes to newer heroes are obviously… Buffs.

I wonder if any of them needs any more buffing? The legendaries are too strong already. I also wonder if they’ll keep buffing event heroes every time their portals shows up. It’s kinda nuts.

wipes away tear Someone who gets me

* been doing that since v37, I also translate balance updates, 2022 sneak peek and event cadence update. I share my translations in a few groups on Line and then they are shared further but maybe I should post them in the foreign language section of this forum too.

Propably buff their minions back to what they used to be in beta at first, if I remember right… (I don’t want that, just my guess on what the changes could be)

I won’t be surprised if they set Diaochan for fast too. Argh… Never could imagine such a depressing scenario for this game.

I really hope Zhuge Liang and Papyros get some love. They need help

It’s like that Black Friday Summon Extravaganza. A portal with all released heroes except for S1.

That pool will have everyone from S2 to S5 (whoever has been released), Event heroes, Seasonal Heroes, HOTM.

If they come with costume, then player gets costume too.

Styx event is expected to be launched in the second half of 2022, after 21 June. Probably before Morlovia (October)

Black Friday extravaganza, avoid it like the plague if you know what I mean!