Dear devs,
Kindly remind that many players are waiting for the release notes

[solved] Release notes can be found in the News section in the game itself.
Didn’t know that

Some changes may be considered a bug, or maybe not (e.g. Gullinbursty’s special).
Please let us know what exactly has been changed.

Have put this into mod chat…

Agree. Noticed that Talents are calling out the Class of Hero (i.e. Monk, Rogue, etc.) instead of the Talent (i.e., Manshield, Evade, etc.) - Is this a new feature or a bug? 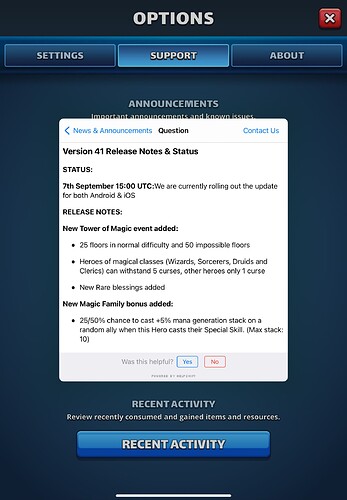 Version 41 release notes are accessible in the game app.

Some changes may be considered a bug, or maybe not (e.g. Gullinbursty’s special).

So sad to see this go…

That’s not the most interesting part, we already know about Magc Tower.

What bugs has been fixed?
What else was changed?

Well, before reacting so fast, how about reading the whole note… to find out what is in there ….

After handing an already available info onto you, you r still complaining to me now… ! Why ?!

Sorry, my bad.
I always waited for a forum post.

@Petri I think it is not solved.

So I think it would be better to publish version 41 update release also here in forum, like all other past version releases

The update information is available in game right now

It is not a message, it’s in the support section in game.

For some reason they just decided not post v41 release notes on the forum how they did it before. Looks like forum no more interesting to them 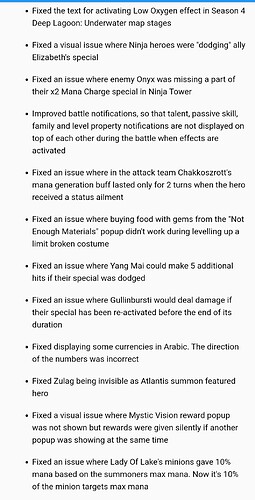 Than we have here the complete release notes if the ones ingame will disappear some time in the future. Always happy to make Sg`s work

This stinks. Overall but mostly because they did it on the middle of a Rush Tournament where the piggies shine because of this addtl damage. I have two maxed pigs at +20 on my defense team and have been using them on every attack team as well. Did my first attack this morning before I saw this and was wondering what the hell was going on. Ugh.

Did not know the pig needed to be fixed lol thought it was part of the special hence why it was slow .

Yet again what a let down by SG now need to find yet again another hero to take its place maybe lady woolerton might hav to dust her self off.

I want to know when they are going to fix the various portals and how badly they suck for summons and mix in some other heroes besides just the S1 retreads.

So the Halloween costumes are available in the Hero Academy? is that a typo, or will the be putting the costumes immediately into the HA after release?

Yes that is what she said, lol. That is what is in the text so I hope they stick to it

No one views this as a Fix. No one! This is awful

Maybe someone should make a bug thread with this

Definitely not what’s written on the card…

Seriously they managed to make Mystero worse, this was the rarest and most useless hero the game has released to date. Anyone who has it doesn’t use it because it’s not worth it. It’s very disappointing.