Hey all just wanted to contribute to the topic, got mine to +17.

I use it in right flank so BK as tank can complement her skill in auto defense. 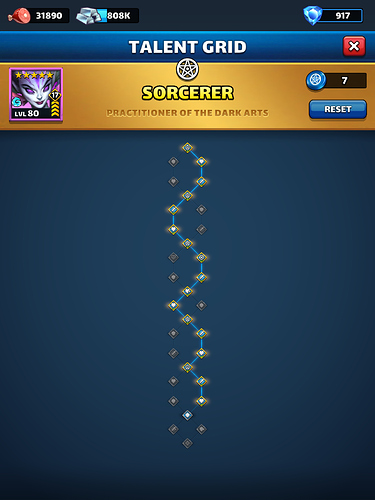 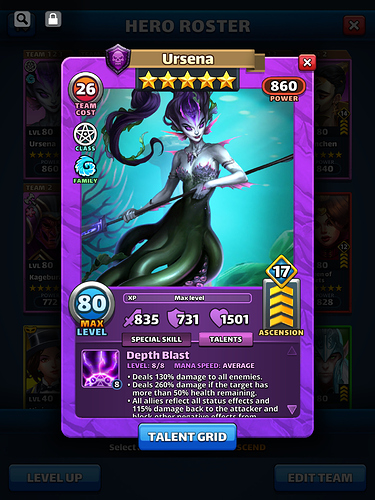 Do you plan on doing last 3 nods, or save amblems?

Interesting path with Att/HP/Def… majority will chose HP at 3rd priority. So either Att/Def/HP or Def/Att/HP, except for HP priority riposte heroes like Cyprian/Lianna, and Seshat for her minnion HP advantage.

Thanks. I am going on here all the way.

She will be my first fully emblemed hero.

I chose HP path for all my heroes as I want them to hold on as much as they can until my healer or taunter fires and saves does heroes for next set of attacks.

They are holding quite nice in raids around 2650 cups.

Mostly I am on more then 60% off won raid defense attacks.

I think IMO, this argument is the same if we choose Def, and Defense is better then HP for make heroes strurdy, that’s why I ask, maybe there are another argument. But if she can hold around 2600 cups, thats great! I will pay attention to this thread as I have so many Sorcerer emblem, used only +1 Sabina, and the rest will go as high as possible for Ursena after she is maxed.

Agree with you, I got a lot off support from other heroes in defense and attack for here, so for me I need here to clean yellows and fire 2 times if possible that’s more then enough.

She is in this combo for defense. 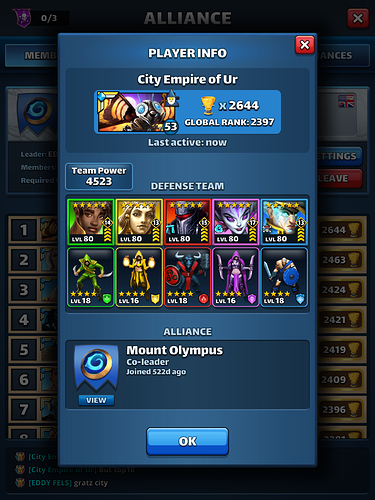 All do I know to exchange Rana with Guin in defense, so Guin from tank position covers Ursena.

Thanks, exactly my question, also answered the troop thing!

Hello everybody. I have a doubt . Im working on Ursena right now and i wonder which path to choose.
She will be my tank , i wasnt one of the lucky who got telluria

. She will be flanked by Jean Feancois and Vela .

So , i was thinking about going all hp and def .
What do you think about it?
and regarding Vela and JF going all to atk > def

thanks for your orientation.

Some queations i have .

What path did you take ? why?

Is it more punishing boosting ursena attack for the enemy? or make her survive longer(until what point ? firing twice?.

i have read that Jean francois with boosted attack (by talents) can make a lot of damage on defense .
Thats why most people go atk path.
Same as above . Atack one time with a powerful impact or live longer and attack maybe twice?

hello friend , sorry for tagging you …
What path did your ursena take ?

Mine is all health and attack and crit and att.

My thoughts were that she will go down by tiles anyway on a good yellow board and want her to hit hard and critical if she’s going to cast.

My def on her comes from a crit troop, that I prefer on def over mana.

i have to do some troop pulls . I have only purple mana troops

Unlike olmor , I mixed between atk and defense, because I think its better when attacking with ursena, that she survives a little bit longer.

Although i also love having heavy hitters with high attack and low defense, but they mostly have fast mana and can fire before they die

What path did you take ? why?

For Ursena, I suggest you just go the attack route. The def and hp are added in a balanced fashion in this route.

Why attack route?
as many mentioned here, Ursena’s shines as tank because of her hard hitting special that goes off when (almost) everyone in the enemy team has more than 50% health left. So, I wanted her attack to be as high as possible.

And from experience, I can tell you, this talent path worked for me.

Just last week I managed to finish here all the way, so sharing here path all the way to end. 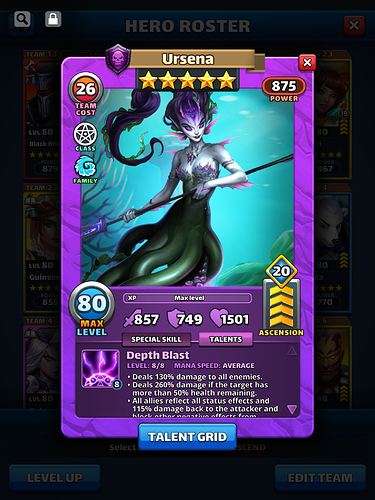 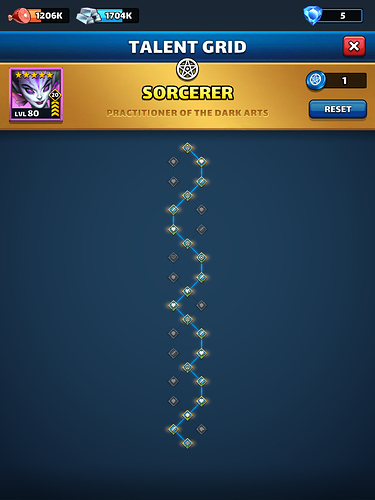 I like your Ursena @Bukefal .
Am i right if i say that with those numbers in attack shes a monster and staple in your yellow titan/bosses?

And if those who stack yellow against you not kill her on time is a gg if she fires.

I see you’ve avoided def nodes a little bit . We are talking about 54 points if i read well. Why is it ? is itbecause the riposte effect?

Thanks for your piece of advise ! i will take her through the attack node im sure now .

Do you have Jean Francois? I was thinking about giving him my wizard emblems to flank my ursena and i was wondering if i should pick the attack node for him too

My JF is currently warming the bench. So, I am afraid I don’t have any useful info related to JF.

Even if I happen to level him in the near future, he is not getting those Wizard Emblems. They are proudly held by my Isarnia, the battering ram of my hero roster, lol. And frankly, there are just so many good options in Wizard class, JF wouldn’t be on my priority list.

Hey @Lexxtarc cheers. I always go strong side and hp on my heroes talents paths. Thing is I would rather have more hp then more points on weaker side of hero in Ursena’s case defense. It is just my way of emblem path.

She is truly big hero against stacked yellow, bosses, challenges and titans. She is on my defense since I got here maxed and she is still there after more then year.

Totally useful for any use in my opinion after Hel best purple in the game.

As I built defense around Black Knight tank, my Ursena is protected and attacking from flank so I focused everything on attack-hp path.

She is bit bad if opponent has less then 50% hp but ok, that’s already almost killed opponent.

Hope you have fun with yours as I have with mine.

This is defense I am running for long time now. 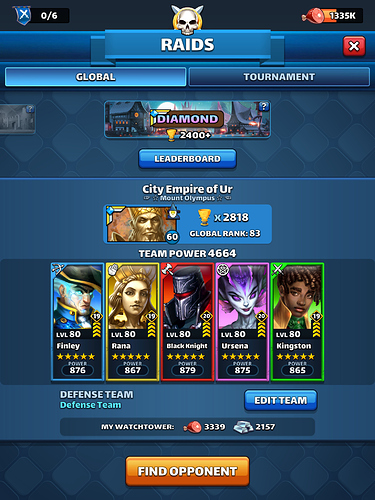 in my opinion after Hel best purple in the game.

I have also taken her down the path of the sword, following @Olmor 's logic, crit troops included.

I use her a LOT in attack. Just wanted to add, don’t forget her average mana, which is a great (attack)feature you can add to.

I do have one shield in there which I regret, but a reset at this stage would be expensive… She’s at +16. Should I do it?

I wish I had more emblems (to give to Lady Locke), but I love Ursi very much.