urgently need help my alliance got the first time a rare titanium tell me how best to expose the fighters and what colors. Please, we have only 19 hours before the end how to put the defense? 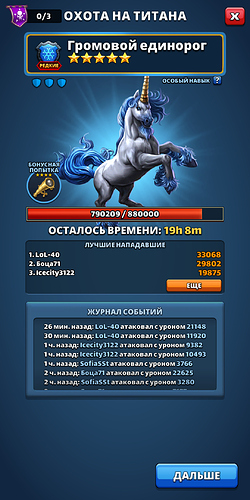 First, don’t use any blue. Wu Kong may help and use as much green as possible, a debuffer if you have any.

When the titan strikes, use the antidotes and a debuffer as soon as possible.

What is the unicorn’s special again? It’ll show you if you tap the question mark near the right top.

Most of these things would apply to Titans in general, but the reflect considerations are specific to rare Titans of course.

Also more specifically for rare Titans, what I tend to do is use more potions than normal - particularly, charge specials right up front with super mana potions, especially the Wu/defense defuff/attack buff ones. Time stops are good, or else probably antidotes or banners - cure your heroes as soon as they get a negative status from the Titan’s special attack. Most of these things are a bit on the expensive side of course as far as food/iron/materials, but worth it for a rare Titan in my opinion.