Thanks for putting this together!! Bruce Lee putting up an impressive showing.

Great job @Razor. Thanks a bunch

Could you please summarize data about team color composition/ what % run, rainbow, etc.

@Kerridock this is what I could throw together Really Quick - I’m interested in this as well and have on my list. This will have to suffice for now… 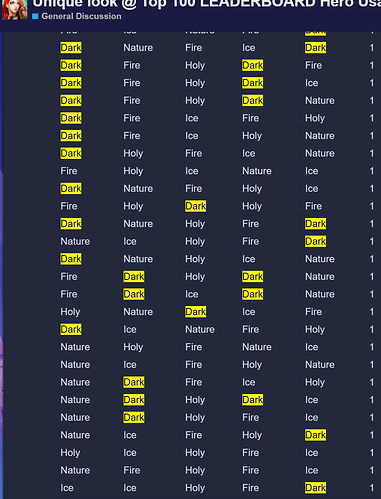 Ahhhh @CheTranqui - Never give up on Sar!
I personally think people are trying to figure out which Dark works best with what right now personally…

The mix of hero use has completely changed, it’s all over the board compared to the very expected Alasie, Gravemaker, Guinievere, Zeline, Sartana (most of the time) which was a monopoly for so long… with slight variations which began with Guardian Panther…

I have a feeling that we will see more EPIC’s now… once they get higher up in their talent ranges.

There are a lot of Hero’s that are just bad asses - the Dark’s mentioned in the review of course even just the recent HOTM: Onatel, Kageburado and Evelyn - huge use, I have countless hours in the LEADERBOARD taking all these on and seeing what people are using… One that surprised me the most was Guardian Owl in the Rear Left - not flank or center… WOW (just a personal favorite surprise - that worked) - [had to come back and mention it worked because the front 3 were tanky themselves - so he got his special off which is a dozy]. Like @Kerridoc always likes to keep top of mind and I agree is TIME OF AVAILABILITY - How long was the hero made available and what percent of the Player population could/has the hero’s? I switched to recording players who maintain 10 minutes or longer on the LEADERBOARD - this has made the data in my opinion much more reliable as well telling (this was some time ago).

I could talk about this stuff for a really long time. There are a lot of mixes you can make that are going to get you on the board and keep you there if that is your goal now, whereas not long ago it just wasn’t so. Players are maturing as well so that plays into as well…

Sartana isn’t gone, I don’t think… She is up against some extrodinary competition however for a Dark role on a team. Lot’s of dual element use, even tipple that works well.

And for what its worth - Panther has spent a lot of time in the Top 6-10 rank (THE CONTENDERS)… that says a lot about her. Khiona, Victor and Kage (even Aeron to a degree - his use has taken a dive to those fore-mentioned however since the NEW YEAR) added into the mix has stretched use of both Panther and Sartana when considered in Rainbow teams, 2/1/1/1 and 2/2/1 is a different story. Sartana is always available for summoning (as well FREE in TC20’s) - Panther, limited to CE’s. Being the th…

@Razor my panther is sitting at 3/70 awaiting my last tabard, BUT I just pulled Kunchen. Oh they are going to be a mean pair!

Challenge Event Database and Leaderboard… Why wouldn’t you?

Alright Guys! The Challenge/Seasonal Event Leaderboard is up! First run limiting to Wonderland and the upcoming… then as more people enter the scores I’ll open it up to all. Backgrounds alternate as well… Slick board for my Slick Peeps! Best success in the WAR! Raz @Starryeyedgryph @DoctorStrange @keltik @AngkorKhmer @AirHawk @Olmor @LadyAnesthesia @SkiParty @Kikyo @Rigs [CHALLENGE-AND-SEASONAL-EVENTS-LEADERBOARD-LIVE_TITAN-MAFIA-USERS-GROUP_2019-03-09_Empires-%26-Puzzles]

Revamp Member Leaderboard while at it…

And your going to want to come up to speed…

H.P.E.T. v3 out today with additions. The TANK Report v2 also out with adjustments. Leaderboard playing EPIC’s who is coming out to play? Class Leveling EPIC’s article with visuals from RAZOR and follow it up with the priority recommendations for your emblems by the Crystal Knights. Hear Ye Hear Ye, READ ALL ABOUT IT… Is it really happening?.. this cookie is crumbling… "THE FALL OF THE ULTIMATES" [image] @MrsBCW, @JimMe, @AirHawk, @H0fm4nN, @Kikyo, @Winters, @CheTranqui, @EVA01, @Hcm…

Thanks guys hope you get in on the boards! Or at least the Reports and Information!

Thanks for the tag! Sorry, I have been busy for the past few months. I finally am having some free time again lately, so I’ll go check out all of it tomorrow!

Looking good @Razor. I like the idea, will give people an idea of scores outside top 100.

HOW DO YOU COLLECT THE DATA FOR THE LEADERBOARD values in the Hero Utility?

@amessofamind. Understand your initial hypotheses. Yes that would be the ideal. However, much testing has gone into the collecting (and again future collections will be extremely accurate). Given my setup of data collection methods, I could capture a snapshot in probably less than 1/2 hour. That is not accurate, and has been proven. Some of the teams I capture have well over an hour offline. Sometimes I wonder what people ‘suspect’ my intelligence level is honestly lol. I’m not the smart…

It has been some time since I returned to this thread… HELLO??? Is anybody here anymore? LOL. New Period In Review released. Also new FULL True Positioning Report available in the Members Lobby.

Thanks for the stats Razor, Urs is a real pain in the …

Hey @Razor ! Yeah, I’m still around, but have forgone a lot of forum/alt/beta time in exchange for real life experiences. Gotta keep up the main though

I’m not that social anyways, being a fairly standoff-ish reincarnated priestess after all.

I see you’ve done quite a few projects on Titan Mafia of late, and all really cool stuff that many can enjoy and utilize! Hope all is well with you, @Roxy_TM, and the gang

Hello. I have since removed this image. Thank you for your support.