I find it interesting that we have proof the Devs were informed about scaling DOT with attack stat, but they never replied ( linky, linky ).

Based on the information in this thread I propose the following formula for DoT calculation:

The DoT factors then look approximately like this (sorted by DoT factor): 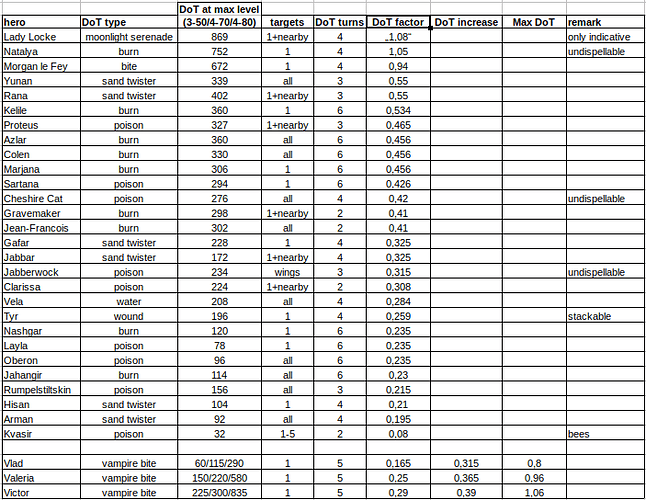 I found that the DoT factors are slightly lower for heroes that haven’t maxed their specials and that are not on their highest ascension level. Without those the curves look very linear (DoT/turn is used for better comparison of the various DoT heroes): 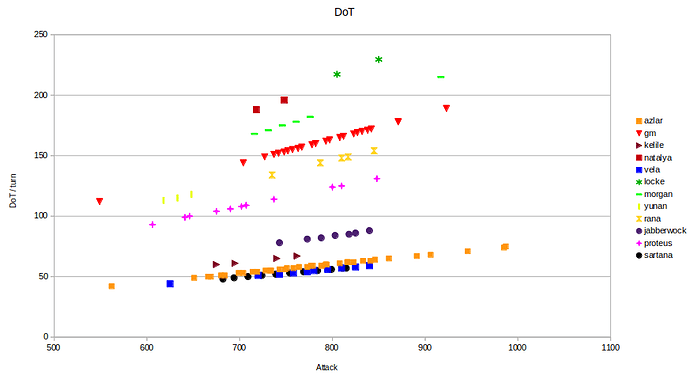 This formula you propose, did you test it for validity? like does it check-out?

Yes, I did some tests. It’s now based on 160 values for the attacking team (card value or with troop during raid) and 27 values for the defending team. For each hero I have 1-16 DoT values.

Five DoT/turn values deviate by 1 point of damage, Locke’s two indicative values deviate by 0.25 and 0.5. The rest fits exactly. Here’s the comparison of actual values and calculated values, including a straight line for y=x: 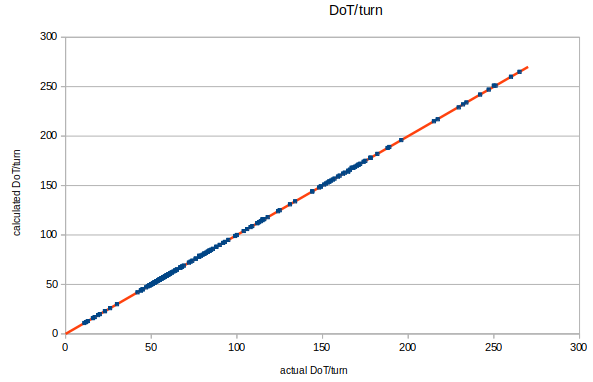 As this fits so well, I went ahead with DoT factors for each of these heroes, despite having only 1 value for some of them (Jahangir, Nashgar, Hisan, Arman, Valeria, Kvasir, Cheshire Cat, Jabbar, Vlad)

I can get a little bit more data with my own Jahangir, Nashgar, Arman and Cheshire Cat, but the rest is hard to get.

Please test this formula yourself. Feedback on the performance of the DoT formula is very welcome. The DoT formula just seems too simple to be true when compared to the normal damage formula

Counterattacks (such as part of Obakan’s special) will reflect a portion of the initial hit but will not reflect the DoT damage.

I just figured this out for myself with Boril’s special. lol.

The formula works nearly perfectly for me. The few minimal deviations probably come from different rounding and from slight differences to the actual DoT factors.

With the new costumes the overview looks like this 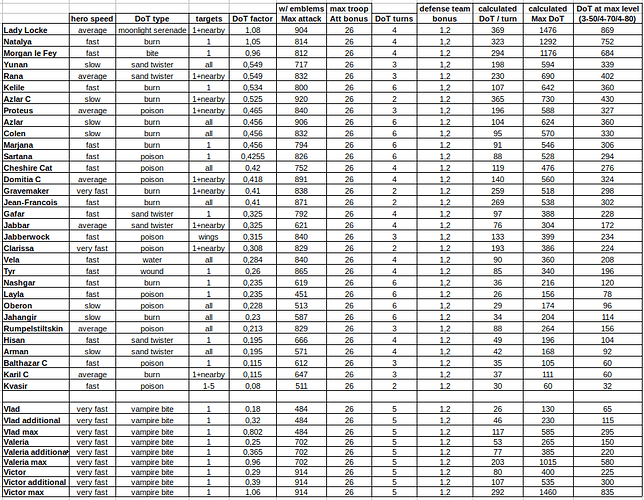 Can somebody please verify this?

Can somebody please verify this?

My guess is that Morgan was improved with the recent balancing of Telluria and other heroes, but wasn’t mentioned in the list of re-balanced heroes.

Are DoTs and HoTs influenced by family bonuses that add to attack?

Edit. Read post 80 by @Zack which has new evidence on what happens with family bonus. This post here appears obsolete.

As for HoT, you’re off topic

. Seriously, The one that could apply is the Guardians Bonus as it affects healing. I did a test to validate. Unfortunately, I put in troops that make this example a bit more confusing but you can see it.

Refer to the picture below. Melander gives HoT of 203. You see though that Melander actually gets 239 as he has a level 21 mana troop which gives a bonus 18% healing. Killhare gets 235 as her troop only gives a 16% bonus. Now, jackal and falcon have similar troops with an 18% bonus but they get 253. This is an additional 6% family bonus. Lastly, bat gets 215 and does not have a mana troop. So he only gets the 6% of 203. I note that it appears to truncate the decimal and doesn’t round.

But again. HoT is off topic!

But again. HoT is off topic!

But healing is just negative damage, so they’re the same thing. Therefore you are on topic.

But healing is just negative damage, so they’re the same thing.

As a mathematician I like this point of view…

Damage over time is calculated by attack value and increases by raising the attack value. There is no such thing for Heal over time.

So it is still different.

Whether different or not, I still answered the question.

Finally I found a team in raid with DoT and family bonus that cooperated with a test.

Lady Locke with +32 attack from pirate family bonus (from Sargasso).

So much for theory, but what happens really during a battle?

The indicated DoT damages were correctly applied - I checked Kingston’s HP with the incoming slash attacks, HoT and DoT.

The other similar situation is with Rumpelstiltskin and it seems to be same (unfortunately, this one didn’t use his DoT):

I have done some maths this weekend. Could it be that DoT doesn’t increase in attack boost wars as well?

That I bet is correct (though I didn’t validate it). Because attack boost is like a special skill and DoT does not go up if you have an increased attack special on, say Boldtusk. It should be based on those that affect the base stat pre-attack, like talents and troops. I’m actually surprised family bonus is not affected - that almost seems like a bug.

What is the actual math to calculate DoT? How much DoT do you gain for 15 attack?

How much DoT do you gain for 15 attack?

Thank you for this. I know it now but when I started i thought it was a bug too. I know there’s explanations in other threads but maybe you could do a detailed write up on mana boosts and troops.

Found a Rumpelstiltskin with family bonus and got him to use his DoT:

This Rumpelstiltskin has 938 ATK and even 966 ATk with his family bonus. The description indicates 198 poison DoT over 3 turns, which is 66 DoT/turn.