I might be stating the obvious, but aside from aesthetic and name differences, are all troops of the same levels have the same max stats? By this I meant every colored troop have exact duplicates of one another, e.g. there is essentially 2 x 1* (with the exception of red / yellow, who only have 1 x 1*), 2 x 2*, 3 x 3*, and 2 x 4* and there are equivalent copies in terms of stats for each color above 2*

Example: Exalted War Constructs (Yellow) maxed is the same as Barbaric Alpha Minotaurs (Red), as Reanimated Master Knights (Purple) as Deepwood Elder Ents (Green) as Imperial Knight Lords (Blue). The difference is of course the hero they are assigned to.

I don’t currently have any 4* Troops, but, I had once thought they vary in the stat bonuses and each color are slightly different, but as I have started leveling troops, I started having doubts, and these charts confirmed my suspicion.

Not to beat a dead horse, but can SGG change the name of Reanimated Fighters (Purple) 1* or 3*? One wears a bandana and is a 3*, you know? Could’ve just did and update and either renamed the 1* to Reanimated Skeletons or the 3* to Reanimated Warriors or something. There is also just about no graphical difference between the Imperial Soldiers (2* Blue) and the Imperial Knights (3* Blue).

Finally, in light of this, I think it may be better to introduce troops that have different stat bonuses, so they are actually unique and are “coveted” and I think 5* Legendary Troops could be up for the task. 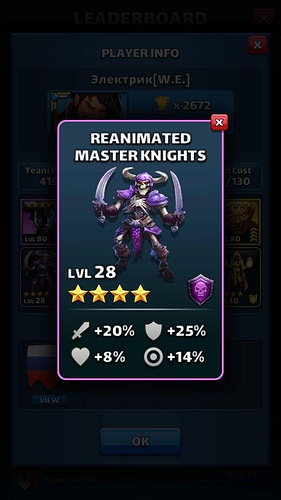 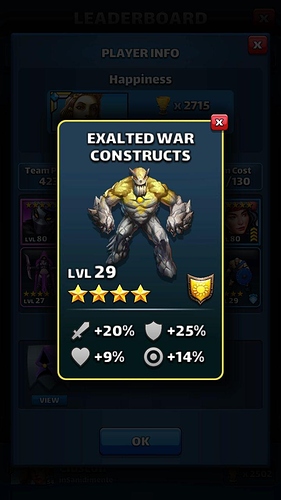 I have updated my troop roster. These are not nearly as good as N.o.X.'s though.Troop rosters

this is great! thanks for taking the time to put this together

I am new to playing E&P and I want to thank you for this information. I am sure there is a thread on this question, but I haven’t been able to sift through all the information, which troops within the same color are better for defense and which ones for attack for each 3 star and 4 star?

For 4*, both varieties are good. The crit/defense version seems better at lower levels, while the mana/attack versions are preferred at high levels (particularly on defense). See full discussion here: 4* troops - mana or crit?

Thank you! This definitely helped.