What is the max I should level these 3* to would everyone suggest?

What is the max I should level these 3* to would everyone suggest? 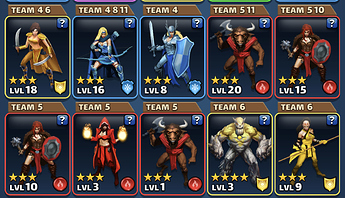 (I actually have some more somewhat leveled 3* too, but you get the idea)

I’ve been slowly leveling reds as I continue to not have any 4* of them, and I got fairly far along on some of my yellows before getting 4*.

For blue I actually have 2 Mana Troops, but I don’t want to level one of them past 13, or the other one at all, so I’ve been slowly feeding some of the 3* sometimes.

It’s pretty easy to end up going a LONG time without some of the 4* Troops, so if you aren’t spending on Summoning Troops, and particularly if you tend to stack 3+ Heroes of the same color, I think 3* Troops are a reasonable investment to level.

Thanks, I thought maybe I was being stupid levelling too much, and I definitely do stack for events and wars so it will help.

Can you or anyone explain the different symbols next to each Troop? I can understand the obvious ones such as Attack, Defense, Health… but then what’s the heart with just a “stroke” and no filled in white? Same for the circle? And is a “crit” troop, the diamond shaped icon? If no, what’s that one? And any others I am missing.

but then what’s the heart with just a “stroke” and no filled in white?

That’s healing bonus, which increases the amount of healing from any healing source.

Same for the circle?

I assume you mean the Crit symbol:

And is a “crit” troop, the diamond shaped icon?

No, the diamond is Mana:

And any others I am missing.

Along with Attack, Defense, and HP, that’s all of them!

You can always just tap on them in the game to see descriptions, like I did in the screenshots above.

Thank you. Not sure why I didn’t even think to try click the symbols in-game. Especially after seeing pretty much everything else is clickable for more info.

Personally I wouldn’t go beyond level 9, tho it’s not the end of the world of you want to.

I had 5 or more of each of the others before I got my first blue. Since then I’ve got quite a lot more ETTs, and done a few 10 pulls, but still stuck at 1 blue 4*…

first of all hi everyone im rather newbie but figuering out my way through game in time.

my question is how important having troops level up while going further through season 1? should i focus on TC and heroes, or troops would help much more than heroes? at this point resources are very scarce and i guess spending them wisely would hep a lot but cant decide which is first to go for.

I think troops are important, specially if you manage several teams in like in AW.

The main concern could be when doing it: If you have reached a point when you can´t improve your team (In my case I need to pull 4* héroes) then it´s time to level your troops as long as you may have spare food (Long TCs queues, enough potions…)

Keep in mind that if you get to complete a challenge or a tournament you could get an important reward (ascensión mats, epic summon tokens…)

Personally I think focus on your heroes, then when you have a leveled team at that point you can work on 3*/4* troops.

If it helps, here are some different leveled 3*s. The most helpful is probably the lvl 9 on the left and level 1 on the right as they are the same type… 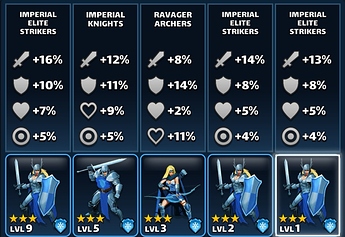 Updated to add recommendations for 1* troops

Troops are by far the most expensive investment in this game, period. I got very lucky to accumulate multiple 4* troops of every color (the only single 4* troop I’m missing is a green crit one…grrrrr lol), and I only ever did one troop summon since I’ve started playing. But to level them all? I have 2 sets at level 9 and it will be a long while before I take either the crit or mana troops any further. Troops are definitely more end game focus, I would wait until I had 30 heroes leveled for war, and at least a decent 3* team for tourneys, plus my SH and buildings at lvl 20 before I focused on troops.

As someone told me, a good hero (leveled) with a bad troop can still be used. A good troop with a bad hero (unleveled) is useless.

If your just on S1 don’t worry about leveling troops. Very resource intensive. When you have SH20 and all 4 training camps running so you can level heroes faster it might be time to think about it. But, until you have 30 decent heroes for war you’ll get more bang for your buck leveling heroes. That being said you will instinctively know when it’s time to start leveling troops. I would guess it would be when most hit around level 40 when it becomes more productive to level troops. But hey, great question and one that we all have pondered… there really isn’t a correct answer but if you try to “really level” your troops early you will find out you’ll just stop because it’s expensive for ham lol

A lot of players only haphazardly work on leveling their troops and/or accumulating 4* troops, with a preference of using their gems to summon heroes. However, good troops are valuable in all aspects of the game, and, unlike with heroes, your troops can be reused for each war battle. A 10x epic troop summon costs 1600 gems–contrast that with the much higher costs for summoning heroes and with the highly likely outcome that you’ll mostly get heroes you don’t want or need. But, every 3* troop you get from a epic troop summon is immediately useful in leveling your 4* troops (assuming you have any).

In terms of 4* troops, my preference, different from what the guide describes, is to have at least one level 23 mana troop of each color. Further, I would take two level 23 mana troops of the same color over a single level 30 mana troop. With a level 23 mana troop, you can fill the mana of an average hero with 9 tiles, which tends to amount to the same number of matches that it takes to fill the mana of a fast hero when attacking (that is, 3 3 tile matches). Being able to deploy a special at least one turn faster is huge. There are a large number of average speed mana heroes, and while you can use emblems to reduce the troop level you need to go from 10 to 9 tiles for average heroes, it will take a long, long time to sufficiently emblem up all your heroes. No emblems or other mana gain boosts are needed to immediately take advantage of a level 23 mana troop on average speed heroes.

Admittedly, decent heroes are needed to take advantage of any troops, but I think it is a mistake to focus on heroes at the expense of troops at any stage of the game.

Totally agree that troops make a world of difference especially the level 23 mana troop. To get troops that high your investing a lot of time or money. Most people playing this game will probably never get a troop that high.

I have a question…

So I’ve decided that mana troops are gonna be what I use primarily, but as for my Defense team…since Guin is not an attack hero at all would a crit troop be better for her to beef up her defense since everyone tries to stack to kill her?

If you want mana troops I’d stick with that personally. She’ll get a bonus on defence at level 5 and 23. Faster she goes off, the more pain she’ll impart.

Very good guide. Some players should notice some of your advice. My strategy is similar. I just. want to share.

That is uber cool. I’ll review and do my best to adjust.

It seems so far away for now. Have 6 teams with the majority 5*, I am just doing my best leveling up team 3 without another grand.

Honestly… I can see a difference but how much of a change does make at max levels.

Cycles through a few opponents in raids…

Here’s one of the 4* troops at different stages.

Will someone please give me an idea of the most efficient way to level my 4*? Should I feed them any available troops? Should I train 2* to feed 3* to feed 4*?