Triton in the Defense team what would be the best place for him to stay? Will it be on the wings or flank!?

Triton shouldn’t be center, but could work well in any other position. I’m not sure how well his special will work on defense, though, because it needs to be timed with your team’s healer. At a minimu, put Triton to the left of your healer(s) to ensure that his special is up before they cast.

To the left of the tank.
Flanking Kashhrek to enjoy screams of pain’s sound

Thank you my friends for your attention.

Initially I put him to flank left side of BT to enjoy life bonuses, but did not know if I was right so I cast doubt.

I would leave Sabina on the bench and bring another hitter. With Triton, BT should be enough healing.

Got it, I took Sabina out and I’ll leave it like that, (Caed, Triton, BT, Tibs, Sonya). I’ll leave to test the defense, thank you @Kerridoc 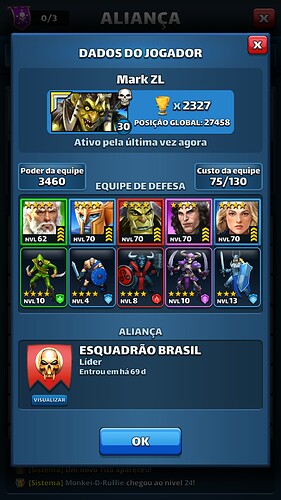 I think his special will be outright broken in war defense with First Aid.

I’m finding the same thing, I suffered 06 unsuccessful attacks 01 my Defense successfully, I think only BT is not able to be part of my team. BT 27% of life + 39% of Triton if he activate first, Sabina to be middle mana was going to call after Triton, which was my first idea, if he lose to BT would still be Sabina.

I really liked the team @kerridoc, but I would have to have a healing + tank a little better maybe Delilah or Aeron would be better for the healing being turn-based, triton would not miss them. But as I am with high cups 2345 already down to 2286 I will wait a little longer, my cups range 2100-2200 praying to hold more cups