I am insulted… after playing for over a year… I still haven’t seen one 5 Star hero… not one!!

I paid over $300.00 in the beginning and the only thing I ever got back from the dev’s was a generic message telling me that once I got my training ground to level 20 I could train 5 star heroes.

Months later and…
My first two attempts have produced a 4 Star purple and a 3 STAR purple. Why?!?

They LIED TO ME!
I want a full refund for everything I have paid into this game for being lied to!

Nobody lied to you - with a training camp on lvl 20 you can get a 5* hero. I am quite sure that nobody told you that there is a 100% guarantee to get one on the first attempt.

I am insulted… after playing for over a year… I still haven’t seen one 5 Star hero… not one!!

I paid over $300.00 in the beginning and the only thing I ever got back from the dev’s was a generic message telling me that once I got my training ground to level 20 I could train 5 star heroes.

Months later and…
My first two attempts have produced a 4 Star purple and a 3 STAR purple. Why?!?

They LIED TO ME!
I want a full refund for everything I have paid into this game for being lied to!

No way! 2 Attempts and you gain nothing?!
It’s a scandal.

Nobody forced you to download this game and to invest any money in it, it was your choice, and the Devs were correct, Lvl 20 Training Camp has chance to produce legendary, notice the word “chance”.

You need to be patient, and persistent, because they will come at some point.

What sort of rate are you expecting? It’s going to be as bad or worse than the Elite level 13 TC. Many people have gone 40+ attempts before getting a 4* at those. FWIW, I’m on my way to leveling to my first TC20 (just wrapped up SH20 a bit over a week ago). I’ve had reasonably decent luck with 4* having two TC13 running simultaneously 24/7, the plan is to run three TC20s together 24/7 and see what sort of luck we have, but I’m not at all expecting better drop rates than 2-3% for 4* and expecting I may never see a 5*

By the way - someone made this comment earlier but it’s worth repeating. How many 4 and 5 star cards do you want at a time? Feeding them is wicked time consuming. I know it is disappointing to wait 2 days for a card you have or don’t think is valuable (don’t forget the monthly events!) but with two TC13’s running and having farmed another 6 or so 3* since I got my 4*, and I just finally hit ascension 3 with Scarlett, so there would be idle heroes for a long time before I could use them anyways. I know it’s a good problem to have but that may be even more frustrating, lol.

I have been here for quite a while so he’s what I can remember (not smart enough to record my data and not young enough to have a perfect memory), here’s my timeline;
Training camp 13 gave me 1 four star hero, I had levelled the training camp to 20 before I got a second and started legendary training instead. I got my second training camp to level 20 before I got a 5 star from training this meant 2 and a half months of continuous training WITHOUT a 5 star. I got my second 5 start the week after my first. I have quite a few 4 stars from the L20 camps but haven’t seen a 5 star again.
I run 1 L20 camp continuously on legendary and the second camp on legendary when I have enough recruits to spare, both other camps are at 15 so I make what I need from them based on backpacks/food/recruits.

@Wajoha is correct, at this time we don’t have enough data to guess at drop rates for the Legendary TC 20. The examples you stated are from TC 13 (I remember hearing about them. I believe it was Jaz in fact…).

I have been hearing some good things so far about the TC 20. No, the drop rates for 5* aren’t incredible, but I have been hearing about them, and 4*s seem pretty attainable. Several people in my alliance and circle of friends have just started using the TC 20, and others will be soon. Hopefully I’ll be able to give something more than anectodatal evidence soon.

For myself, I have run 25 trainings in my lvl 20 camps combined. I have 2x 4* heroes, and the last training I got a Lianna. Since then all my resources have gone into levelling her.

I do know another fellow in my alliance that has received a 5* as well in his first dozen trains. We could be abnormally lucky… only time will tell…

Please let us know about your experiences, and tag me with an @Coppersky if you think about it!

Been playing this game for a few months now and I have spent maybe a little over $300 and I did the summoning. Have 7qty 4* heroes. Yeah I got many 3* heroes but I used them to level up my 4* heroes. Don’t spend too much at one time because that’s their gimmick. 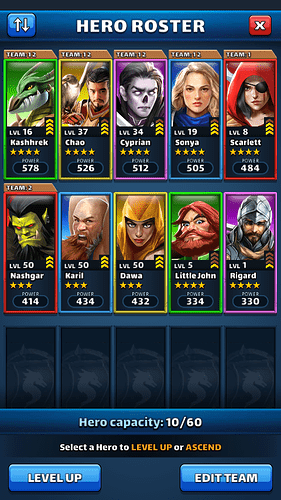 I think I’m one of the impatient waity people. 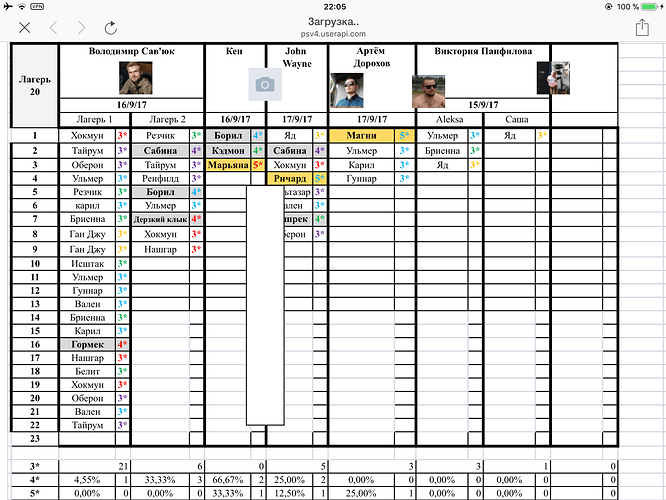 Still only 60 attempts. If others could add their attempts we can get more accurate percentages

Maybe I’ll start a new one

It will let me change it. Tell me what you want it to say…

How about “Training Camp Level 20 results”

That should make it easy to find