Trainer troops should be added to the hero academy, just like trainer heroes are in the academy. The concept was nice during the black Friday sale and I think this should be expanded upon. It will help to get troops leveled up quicker and is a better option than to retrain 4 star troops. What are some suggestions that can help make this a reality.

Welcome to the fourm… Not a bad idea where would you fit it in… Do another research on the troop levels for the required 1.2.3 trainer troops or make HA to 13…
Troops cost alot and can see this costing alot for trainer troops… It would depend on where yah in the game I guess…
Trainer troops didn’t blow me away when the free ones was given… 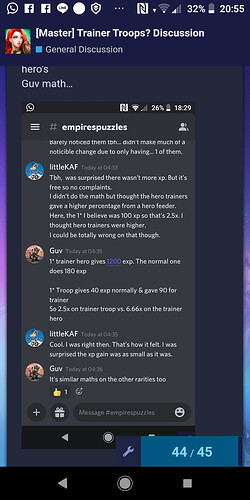 Trainer troops are being given as rewards is good enough for now.

Their availability via Hero Academy doesn’t seem feasible for now, as I see it, it is a fair wish !

For now, I m happy getting them frequently as rewards.

Every thing won’t get solved right now…. Some players have forgotten the key word about this game = Grind, which won’t change !

It’s an interesting idea, and if implemented, guess who will no longer be using other levels of the troop training functions? Because, even if randomized to be able to train 1* to 3* trainer troops, it is still overall more attractive than the 1* - 3* troops and trainer troops are not tied down to colors.

Also, I have also mentioned this on numerous occasions as an improvement to HA to allow it to serve more functions that can be “hero” related, as it is a “Hero” Academy, migrate the troop related functions within the HA (HA2, HA4, HA6, and HA9) out of the Hero Academy, and into the Barracks (increase levels of the Barracks if needed to house these or provide a second conversion option called Advanced Barracks), so Barracks can actually do more than just inventorying and upgrade your existing troops.

Yeah, maybe they can be added with a certain chance for the troop related HA levels.
Maybe the troop summon can contain them too.