I have Hanitra, Topaz and cWhite Rabbit.

I have no other dodger but i still give Topaz and cWhite Rabbit the edge over Hanitra.

So who should i level (first)? Topaz or cWhite Rabbit.

Topaz is a very strong hitter and if there are minions she becomes a real beast. I guess with Season V and W3K there will be plenty of minion summoners. I have Zircon as next blue hero to level so i could have the familiy bonus.

On the other hand cWhite Rabbit looks like a overall good hero who could be used i nevery aspect of the game.

Which hero would level (without any thoughts of roster)?

Thanks for voting.
To be honest I am suprised. I was leaning more towards Topaz.

Let’s see how the Poll goes on.

Maybe someone wants to share the thinking behind the decision

Defense down to three that cannot be cleansed and resets every time a hero is healed will do you far better than a hero that is essentially slow to maximize her damage.

Thats a good point. A really good point. I thought the niche Topaz will get pretty strong with the upcoming heroes but cwhite rabbit will just be good on his own. I can even see him on defence because most teams attack with at least one healer.

I will say this was a tough one, but I think the right call is to go with C.White Rabbit simply because there is basically no situation he would be bad in.

Topaz also would be useful even outside of facing summoners because at functionally average speed she delivers a very strong 3-hit. At the same time though, to clear all minions from all enemies she is weaker than Grimble, C.Gormek, and Gobbler because she needs that slower 3rd charge.

Both great heroes but the Rabbit is more useful overall.

You might change my mind and I will go with the rabbit. Never thought that I will have such luxury problems. I am really grateful

Thanks for your help. It’s a pleasure to be part of such a great community

Thanks for posting this, @Japtrian! I’m in basically the same boat (all the heroes you’re choosing between, plus a few more, for my first 4/80 yellow 5 star). I was already leaning towards Rabbit - I’m very interested in seeing the poll and answers!

Atm the poll is nearly even. Im really curious.

I am also for the White Rabbit. Def down holy heroes are very rare (I am not sure if beside him and C Vivica who is slow there is another one), so for sure I’d go for him. Anti-minion heroes are a bit more common, including the 4*, who, as @Yomagn-tho mentioned already, destroy all minions faster than Topaz

Topaz is a bit weaker (slower) in terms of minion destruction but brings big damage.
Some other aspect of ninja is the versatility because you can choose between the 3 stages of the skill.

But the undispellable def down from rabbit is pretty handy too.

I’m a bit surprised too, although I can see the arguments for white rabbit. I mean lookinag at impartially:

Looking at it partially - I have Topaz and she is by far my best hero. And I have a pretty decent roster.

Which minion tanks are you referring to, because that won’t work with Krampus or Bera. Her poison is too potent and his taunt will stop Topaz. Knowing that, you can only be referring to Freya, who isn’t a big enough threat to warrant ascending Topaz, or unreleased heroes that we don’t yet know their effectiveness on defense yet.

I get you have topaz and you see her as your best hero, but your roster isn’t the OP roster. C. White Rabbit, for a general yellow stack, is more useful in EVERY aspect of the game, including titans and rush events.

With your logic, you should advise the OP to wait and see what minion summoners the game brings, not ascend topaz haphazardly.

Which minion tanks are you referring to, because that won’t work with Krampus or Bera. Her poison is too potent and his taunt will stop Topaz.

Vs Bera - her poison is not too potent. It is easy to get her to spawn multiple rounds of minions as she is fast.

Vs Krampus - he is not usually at tank. But regardless bring a dispeller or pre-dispeller and fire them off before Topaz and problem solved.

MN is the other prevalent minion spawner at the moment. Santa too although Xmas defenses are not quite as common. Director Zuri. Pengi. There are now, and will be in the forseeable future a large number of minion teams where she will have a huge impact.

for a general yellow stack, is more useful in EVERY aspect of the game, including titans and rush events.

White rabbit would work almost as well for titans and rush events at 3/70. I personally don’t see -34% defense down on 3 nearly as impactful as the huge hit and mana up for all that Topaz gives. In a lot of stiuations there are other heroes with a better defense down that I would rather use if I wanted defense down - I would really only use him specifically in a yellow stack. And Topaz is not designed to be in a yellow stack but to work as an off color in any other stack

C White rabbit is like an A- general hero.
Topaz is a b+ general.hero and an a+ hero vs minioms

A few raids which basically answer your doubts about topazs effectiveness 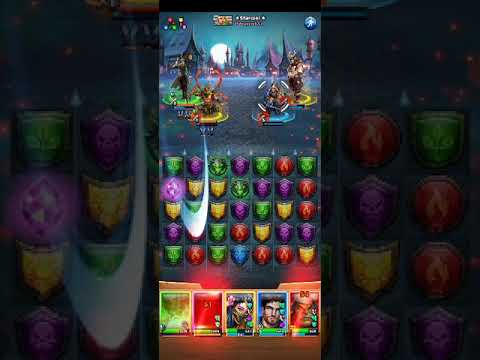 I just watched 3:36 of your video and I don’t see the appeal. Maybe you like her because she fits your play style, but I think the white rabbit in his costume would have done better, especially against costume MN.

I think the bottom line here is that there isn’t a wrong choice. Either one is going to be beneficial for your roster. Just do what makes you happy and start saving darts for the other one. I normally suggest bringing both to 3.70 and seeing what works better, but I believe both of these would need to be maxed to get the full benefit from them, and you already know they are both good heroes.

Impressive showcase, but perhaps more for the “pointless” Lughaidh, and yet more advertisement for the Golden Pig, than for the ninja minion blaster. But she did ok.

I voted for the Rabbit. My reasoning is the defense down to three at fast speed. When I’m evaluating a hero I think about offense and titans. The rabbit will definitely be on your purple titan team. On offense all of your other heroes will hit harder due to that defense down. So when you do ascend Topaz she’s going to hit even harder bc of the Rabbit. I think these two will pair nicely in an offensive stack. Either way it’s a nice problem to have. GL