Sorry for the delay. As mentioned above, I’ve been out of town on vacation (thank you, @rebelk1ng). Capturing war results was a bit more challenging than usual, so please let me know if anything doesn’t look right.

Here is the recap from the last war:

Someone cares. My bestest fan!

I haven’t forgotten about you…

I haven’t forgotten that you keep saying you’ve not forgotten about me.

My least favorite part of putting together the recap has become ranking the Top 10. I don’t know why, but it is. So I’m going to try something different, which is to go ahead and determine any changes to the Top 10 going into the next war. Changes to the Top 10 will typically be due to (1) current war results and (2) the 11th prior war dropping off the ranking period.

Exceptions are the #1 and #2 ranks, which are based on the prior war against each other.

Going into this war, there was no change in ranks from the prior war. After this war, be Water drops from #8 to #9, largely due to its win over Quantum Knights dropping off the ranking period, and The Fighting Squirrels move up from #9 to #8.

SErotonin had been firmly in the #7 rank for a few weeks now, but the gap between them and #8 shrunk after this war. More about that in a bit.

Also, while the gap among the #8 and #13 alliances was razor thin for a while, a small amount of separation has occurred between those in the Top 10 and those outside the Top 10. Not much, but a bit more than before. 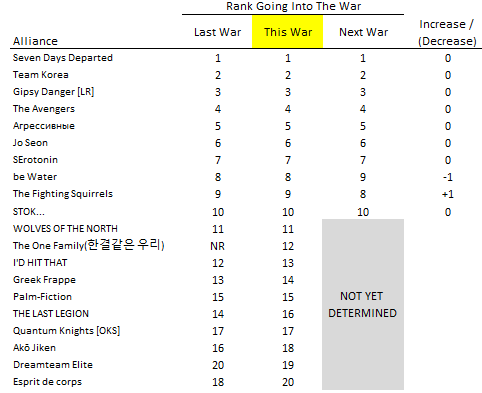 Shifting to this war, #6 Jo Seon had an opportunity for an upset win over #2 TK. Despite a valent effort, Jo Seon lost by a relatively close 392 points.

In a near upset loss, #7 SErotonin narrowly defeated #13 I’D HIT THAT by 106 points. That puts a small dent in SErotonin’s armor, but a win is a win. IHT defeated the The One Family (now ranked #12) last war, suggesting IHT may have set itself up for a run to Top 10 status in the coming weeks.

In close wars, #44 Impulsive defeated #41 Chat by 1 point. I’m guessing most, if not everyone, in Chat is second guessing whether they could have gotten 2 more points. This is the 19th one point war that’s been recorded.

I don’t usually comment on unranked wars, but I can’t resist as we had a 2 point war against Home Run (recruiting, by the way) against Quds is ours. Too bad more wars can’t be like this one.

#17 Quantum Knights welcomed #36 Qunatum Fury to the family in an 852 point intra-family thumping.

Despite its #63 rank, Союз Конфедератов is not an opponent a drop down alliance wants to meet. They hit hard, and most of their defeats against higher tiered alliances are close wars.

An unranked alliance making waves is Viet Nam United. They first appeared in reported wars in early October and seem to have quickly grown in strength. More recently, they narrowly lost to #14 Greek Frappe (428 points), before defeating #11 Wolves of the North this war. If Viet Nam United had been ranked, this would have been an upset win for them as Wolves is a full tier ahead of them.

Currently Viet Nam United’s max war cap puts them at #27 among ranked alliances. Whether they will fight above their level and knock out Top 20 alliances, or settle into their range of the 20’s is to be seen. They’ll be ranked after this next war if they continue to fight at 30/30.

And finally, for wars that I have recorded, here are the alliances with at least 7 wins in the last 10 Rush wars. It’s not a perfect list as not all wars have been captured and no offense to any alliances inadvertently left off, but I have to work with what I have. Thank you Hendrik (The Incognitos) for this idea.

And here’s the short list of alliances with 10 wins (only Royal Flush) or 9 wins:

Note to self, don’t forget the one you want to forget.