To summon your desired hero doesn't have to be impossible any more. Let's look at this idea together!

After reading the AMA iterview with the SGG team, I must admit I started to feel much more positive and I’m really looking forward to the planned future improvements, especially the new buildings

In addition to the planned changes, I’d like to remind you of my idea, which could please a lot of experienced players.

Could you allow us to mark ONE hero of our choice with a tick, so the chances of summoning it would increase by 5% for doing every Summon x10 and 15% for every Summon x30? We could mark the desired hero like this → 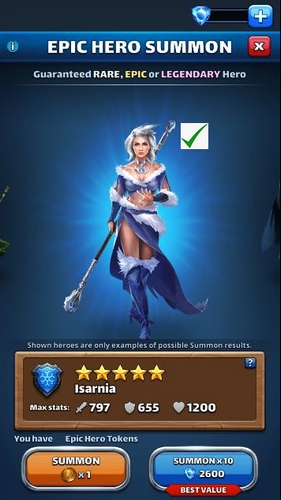 That would also apply to summoning ONE old HotM at the Atlantis Summon gate.

My cousin @LaraCroft already offered a possible solution. Here is a similar solution from me →

75% could be the maximum for both x10 and x30, because I’m aware of the fact that heroes aren’t supposed to be guaranteed. However, this is a great way to improve the horrible “almost impossible” chance

Please, consider this idea. Any feedback is welcomed

I tagged some members of Staff including Moderators

Just to make sure it’s clear for anyone else reading this post, Moderators are NOT Staff.

We’re just volunteer players who help with the Forum, Reddit, and community efforts.

You all are important either way

I’ll just add a great little factoid I picked up on early in the game when I just started playing is that u can hit the info button on legendary summon and special and c the current % for each type. If u monitor it u can c it will spike up a tad towards the end of the event. I am serious it worked for me so darn well I got stuck in an all legendary lineup for Pete’s sake that has haunted me trying to level them up. Anyway just try it. Wait till the last few hours and pull 10. It will surprise u

If u monitor it u can c it will spike up a tad towards the end of the event.

This is a common belief, and is fine to choose to do as a superstition…but during the recent AMA they very explicitly said this is definitely not the way it’s programmed.

So if you enjoy the superstition, go for it, but I suggest you don’t get too invested in it.

If u monitor it u can c it will spike up a tad towards the end of the event.

Interesting! I’ll focus on that right before the end of the next Event

As for the particular “desired” hero, which is an old HotM in my case - our chance to summon it is always 0,325% at the Atlantis Summon portal

In other words, maybe we will never summon it, because there are 4 Featured old HotMs with the chance of just 1,3%, but this is only the chance for one of them to appear, not for the desired one

However, my and Lara’s idea could solve this problem

This is a common belief, and is fine to choose to do as a superstition…but during the recent AMA they very explicitly said this is definitely not the way it’s programmed.

Exactly as I originally thought

I voted for this idea

My chosen Hero right now would be Joon or Marjana. rolls the bones!

I gotta say I love Marjana!

It totally could b superstition too. I will admit info something seems like it worked because I noticed a small percentage increase and it repeats it very well could b coincidence. I would need to start collecting my own data set. But it really does show the occasion bump in legendary and hero of the month drawn right towards the end. I’m guessing maybe it’s a cumulative effect from all the last minute attempts? Maybe. But I tell ya it has been my belief so I choose to keep worshiping this golden calf!

Sorry. It is buying heroes.
The best thing about the game is rng.
The second best is the odds are ■■■■ poor.
This gives the game longevity which is good.

I don’t want to be able to buy them.

I like this concept, but let me suggest a twist that will make it better fit with the current system.

(Or maybe this was what you meant but i didn’t understand.)

This preference selector does not change the probability of summoning a particular rarity; odds of a legendary are still 2.5%. But if you get a legendary, then having checked the box tilts the probability towards getting that hero in some cumulative way.

Example: in the Atlantis portal this month there will be Poseidon, Atomos, and two old HotM. Imonly need Poseidon, so he gets my check box. If hit the 1% chance of getting a featured legendary, then it there are improved odds for it being Poseidon.

No guarantees, but better odds of avoiding dupes.

@Kerridoc That is a better idea .

I feel the odds of the 5* hero should be lowered a touch to pay for the increased odds of getting the one you want.
Change it from 2.5% to 2%

No buying your way to success.

No, you’re wrong! It’s not buying heroes at all. It’s just an increased chance for only ONE desired hero, which isn’t guaranteed anyway. We could get the ability of marking the hero as a reward for playing a long time, like a year or so.

Most people save their gems for particular Event Heroes or simply wait for a particular hero in Atlantis. They spend their money anyway, because they believe they will succeed in summoning it. And if they really summon it, then it’s basically the same thing - they “bought” their hero.

And there are, of course, people who spent hundreds of dollars but failed to summon it.

My idea is simply to get the same chance for everybody including you.

@jura. You are suggesting that people who spend money get a higher chance of getting the hero they want. And if you spend more the odds improve in your favor.

If that isn’t buying a hero, then it’s buying preferential treatment.
Which is still wrong.

The only way to improve your chances to get the hero you want is to spend $ for another go.
That way the f2p can laugh at us while they harvest their tc20s.

Thinking about this more.
Your idea should be applied to tc20.
In this way.
You select your preferred hero. Including hotm.
The odds stay the same, 5%. So the forum says. Make hotm 2.5%
It takes 4-5 days instead of 2 days.

Perhaps this should be a new idea.

Here is a similar solution from me ->

Firstly, thanks for tagging me my dear cousin

and secondly, this suggestion really is even better

I must admit I started to feel much more positive

Glad to hear that, we already talked about that - a lot of novelties are coming, which is definitely a good reason for positivity

Sorry. It is buying heroes.
The best thing about the game is rng.
The second best is the odds are ■■■■ poor.

Now I will try to explain why there is a good reason to disagree with that. Let’s take 6x Summon x10 and 2x Summon x30 as an example. They are the same, both would have 30% chance for your marked hero.

There are several types of players:

They all do that for some reason. I believe the reason are particular heroes. They all would have the same chance - 30%. A simple rule could apply if they succeed - no duplicates. So, you could get only one Gravemaker, because you can get only one desired hero

our chance to summon it is always 0,325% at the Atlantis Summon portal

And there are 20 legendary heroes in Season 1, which is always a 0,075% chance for your particular hero

Non-featured legendary heroes in Atlantis are even worse