To Cup Drop or Not to Cup Drop

There’s been a lot of commentary as of late regarding cup dropping on this forum as a result of the match making in AW.

This isn’t a new thing, there have been complaints previously, but it’s definitely more frequent now. There’s been several rationales suggested for it:

I fall into this last category, I’m constantly burning through food leveling heroes and troops, I barely craft and I haven’t done all of my research yet either. For those that don’t know me, I’ve been playing since early July, and at least I’m a competent raider as evidenced by this recent screencapture (no flasks, and with this somewhat ridiculous defense): 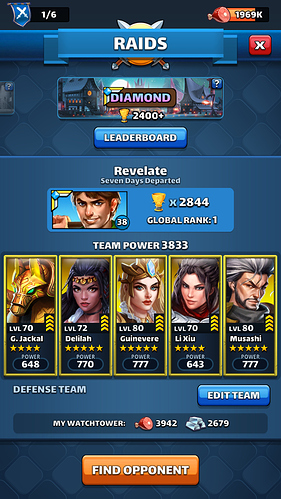 I also have an alt that started a month and change after my main. The salient difference between the two accounts is that I cup drop on the alt, and I don’t (alliance policy, my fault since I was the one that suggested the 2400 floor) and I thought it would be interesting to just directly compare the two accounts documentary style when it came to raiding.

I will post screen shots of raid flags spent at the same time (within a small window as I have to play them sequentially) to eliminate the time of day variation in player activity and post the ending cup value for both accounts.

Wins / losses: ain’t no shame in my game, just ham. 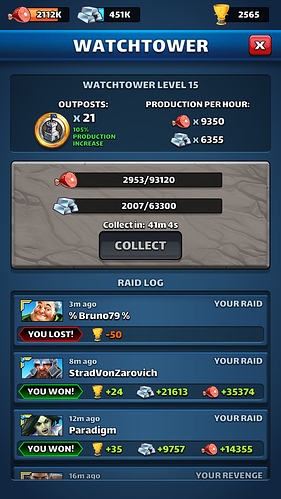 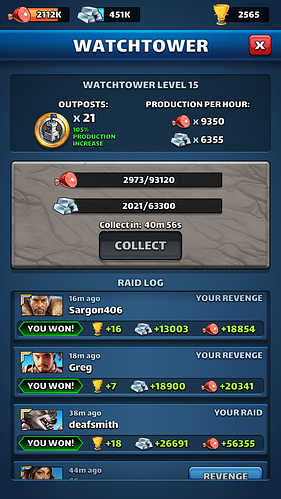 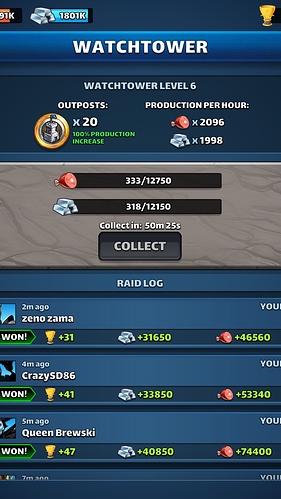 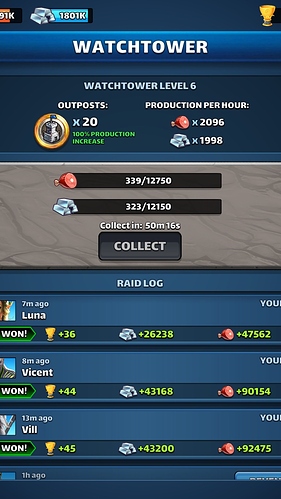 So basically cup drop got it.

So basically cup drop got it.

Not sure it was really ever in question in my mind: I haven’t been shy in suggesting I want SG to fix this by balancing the ham out by vastly increasing the ham (and iron for those of us with the second builder) rewards in the diamond tier chest, by several hundred thousand actually.

This is an attempt to demonstrate the issue directly and explicitly.

I vote for your proposed solution. Cup dropping isn’t the end of the world, but it seems to be an unintended consequence of the fruitfulness of raiding down. If that incentive to tank could be removed then perhaps we’d read fewer complaints from early- to mid-game players about how hard raiding is, and fewer complaints from those who just had their butts handed to them in alliance wars about how their opposition ‘cheated’.

The thing is, the more active people with 2000+ trophies empty their watchtowers every 2 or so hours.

That’s a completely sensible, rational approach (!) that sums up the problem perfectly.

Since more ascension items is some kind of taboo, having tons of more steaks definetely seems a good solution.

I think it’s rather funny how the introduction of raid tiers was supposed to discourage cup dropping (higher tiers grant better Heroes Chest rewards, or do they?)…and then along comes Alliance Wars, and cup dropping starts to make sense again.

I hang around at the bottom of Platinum and am nowhere near top tier, but I think it makes sense to increase the rewards for the filling these chests. TBH the only reason I try to stay in Platinum is to rack up enough wins to grab that new avatar.

Everyday I fill my diamond tier raid chest and get garbage like this I wonder why I continually frustrate myself raiding people with 4000+ power. The loot in upper tiers is not better. I have received 1 nonfarmable ascension item since tiers were introduced. When they actually make diamond tier live up to its name and make rewards worth the effort, then and only then is cup dropping going to stop and will additionally help the matchmaking issues in AW. 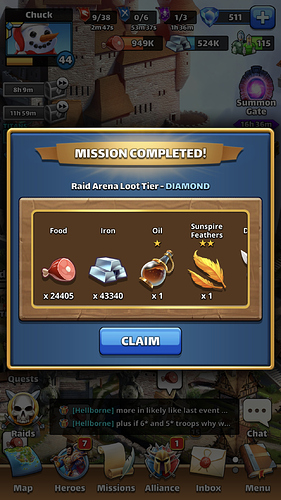 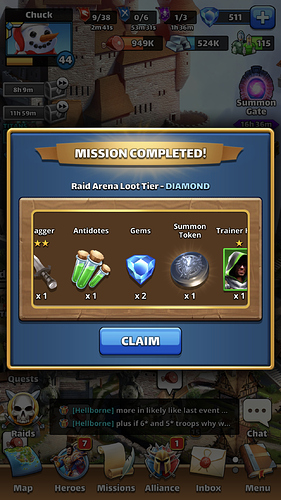 Seriously. There are easy options to do it without imbalancing the game. I even wrote a small proposal somewhere before. Basically guaranteed thresholds for food amounts, iron amounts, gem amounts (didn’t go over 5 guaranteed AFAIR), silver tokens, trainers, craft items… Don’t even have to touch ascension item rates to make these alluring. 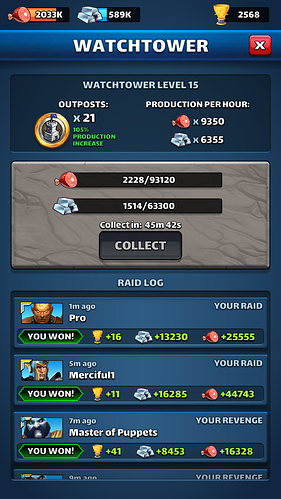 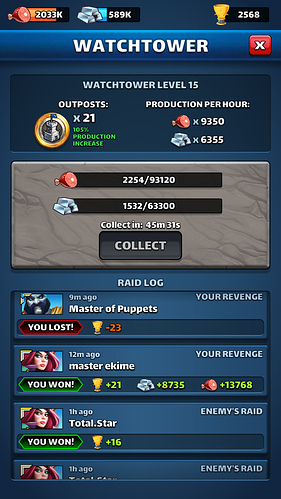 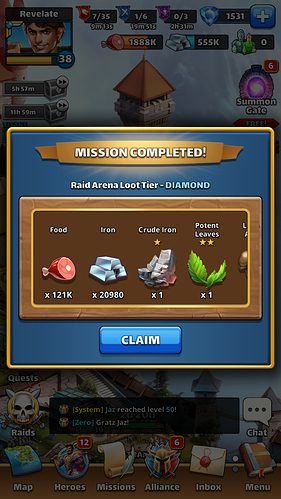 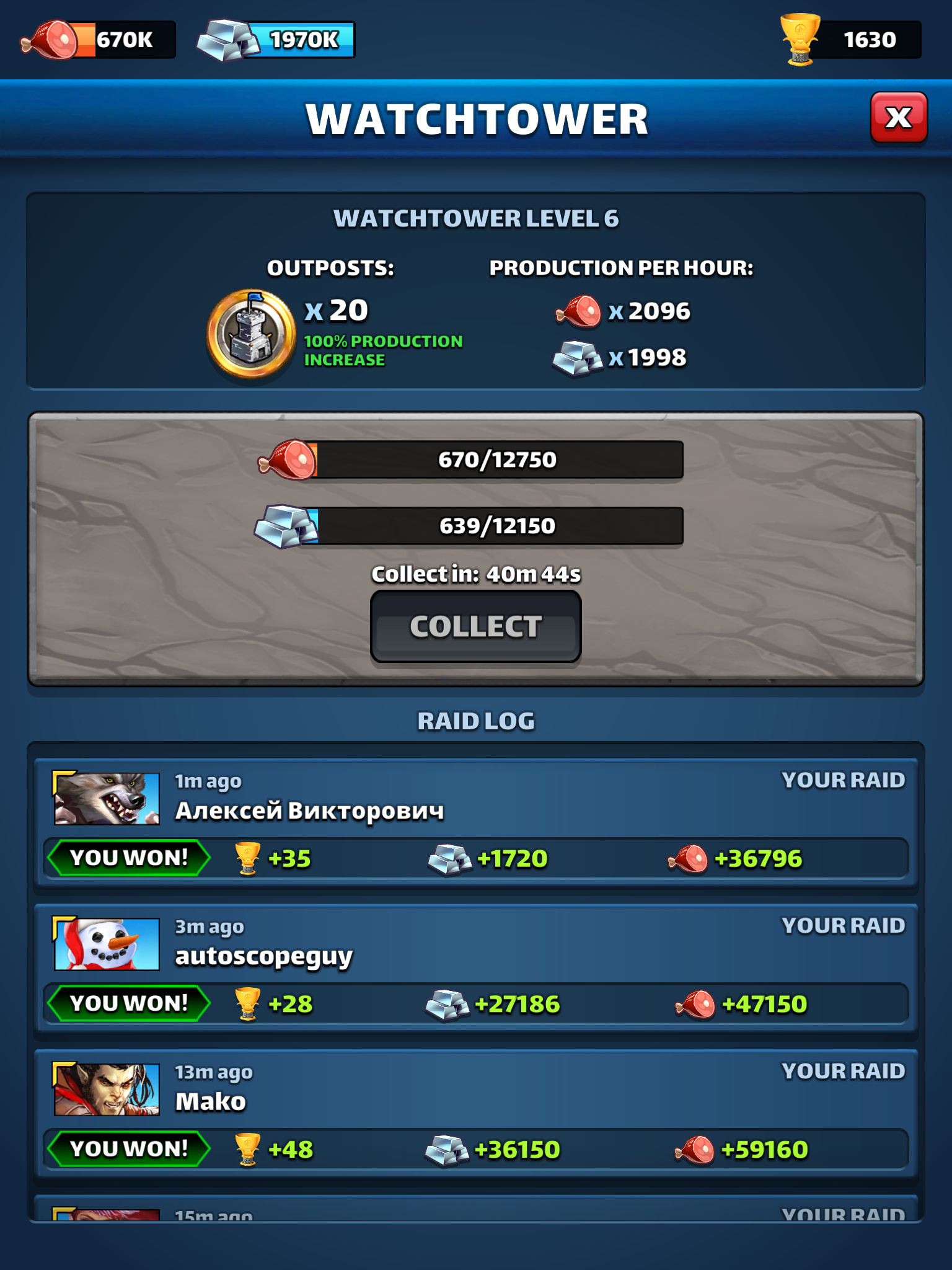 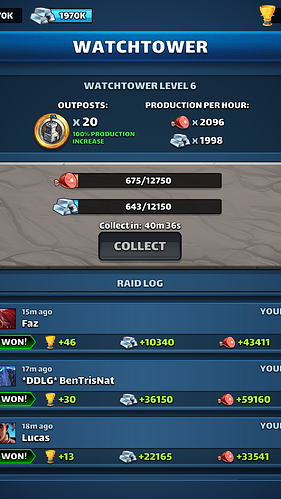 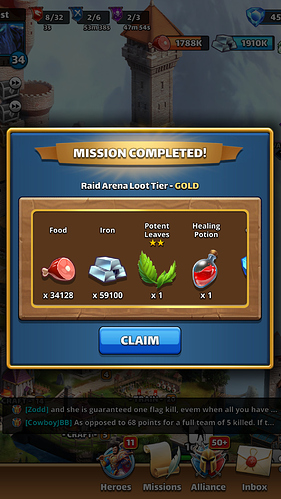 (By the way, this is a really much better than average raid day on the main and I’m still I’m still getting my tookus kicked when it comes to ham income from raids) 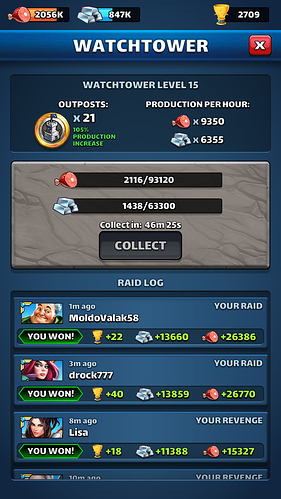 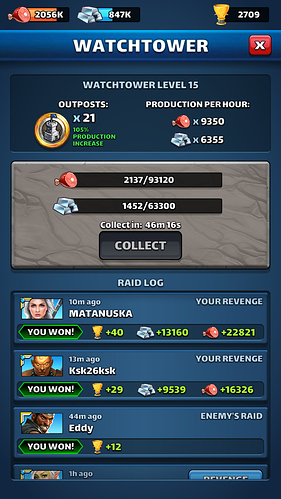 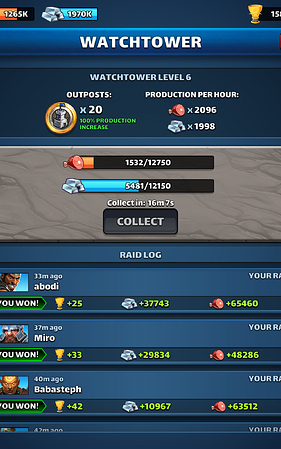 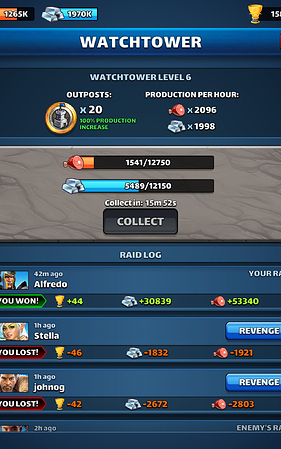 Like your idea bout the hams, but some folks like me cup drop for a fast body count and the extra hams can be a bonus some days, and other days they go to waste. Seems like when it comes to hams im a feast or famine person.

I usually get 3 elemental chests a month and that cause i try to do the daily quests at least 3x a day each. But the majority wants me to work harder for my body count im game. Adapt and overcome is what i was taught.

Third
There are several ways Devs could discourage trophy dropping, but there are actually three separate issues here, attack trophies ( easiest to fudge), defense trophies ( hardest to fudge with precision ) and selecting your opponent ( this has lots of pros and cons ). The forum contains lots of good suggestions to fix all three but the Devs have stated war and season 2 are their current priorities, so maybe we should start a Mega Topic for this so the mods can merge them all together after each is created?

Hmmm…
I see this topic as trying to fix the wrong thing.
I don’t see much of a problem or harm in cup dropping… except when it starts interfering with AW matching.

To me it’s the AW matching logic that is flawed. The idea has already been aired to rather base it on strength of top 30 heroes in a team rather than Cups (which are subject to any number of variances, deliberate or otherwise). Not sure why that idea isn’t getting more momentum?

If AW matching were fixed, cup dropping will remain a valid tactical consideration of balancing ego (placing) versus practicality (hams or hero chest fill rate) versus item need (supposedly better items for higher tiers). I’m quite happy to see that dynamic remain and wouldn’t like to lose it as a way of fixing what is widely considered to be a flawed AW matching mechanism.

It is hypocritical to approve of one situation and wish for it to continue, but to identify the other as a problem and seek solutions.

The competition aspect I see as only a very minor part of it (in fact I don’t care about the competition part of raids). Those who want to compete in raids won’t drop cups… and while climbing the ranks will simply avoid those who obviously have dropped cups.

The motivation for Alliance Wars is entirely different. We don’t do alliance wars for the rewards, or for resources. The only real motivation is for you to prove your mettle as an alliance. For this you want a fair matching system which is not subject to abuse.

So, no, I don’t think it’s hypocritical at all. Nice of you to say, though.

All your comments about Alliance Wars could be applied equally to raids - they’re just a personal perspective. Let’s test it:

‘We don’t do [raids] for the rewards, or for resources. The only real motivation is to prove your worth as [a player]. For this you want a fair matching system which is not subject to abuse.’

See? (This, as it happens, is precisely how I feel about raids.)

Moreover, cup dropping to raid also facilitates stealing vast quantities of vital resources (food, especially) from players that are much weaker from you, by engineering artificially weak matches. This is a considerably worse effect than losing one ascension roll twice a week when you face a mismatched alliance in a war.

I must caveat these comments again by emphasising that cup dropping is an entirely valid, rational and sensible strategy that I don’t disapprove of at all. I just see it as bad for the game (in both raids and alliance wars, because I’m consistent) for the reasons outlined above.

I am seriously considering dropping down to platinum. Raiding in diamond is not worth the additional work. The rewards are not worth it. And as to that avatar … uhm … I am a lady, so I will not say exactly where they can put that. It would not be polite …

Yes, I definitely advocate adding a nice amount hams and iron to the diamond reward chest.

It may be nice to raid for bragging rights. But my heroes cannot eat those …

So it appears you called me a hypocrite based on your values… not mine. Not really the definition of hypocrisy. If I valued the competition aspect of raids, I would indeed have a hypocritical viewpoint. But because my explanation of why I feel I’d prefer to retain cup dropping and not have cups retained as a way of matching in raids happens to differ from your motivations for raids does not make my statement hypocritical. It just means my motivations differ from yours.
(Really, if you had dropped the ‘hypocritical’ jibe from your post, it would have been a far less loaded debate… but then that’s part of the fun of your posts, so I won’t take it too personally

All your comments about Alliance Wars could be applied equally to raids - they’re just a personal perspective.

They ‘could’ be, but I suspect you well know that it wouldn’t fit a large proportion of the player base. It is well known that people raid for resource and hero chests… some of the better players in the game freely admit this and there are plenty of posts on the subject. So your statement, while logically consistent, doesn’t actually really fit the known facts.

I don’t see it as bad for the game to have my food from my keep stolen in raids (by cup droppers or otherwise). If I get strong enough, I rise above the cup droppers. If I’m not, the food that is stolen from me is also accompanied by lowering my cups, which allows me to regain that food from others while rising up the cups again. So it pretty much balances. If I hate the concept of people stealing my food, I keep my Keep level low. If you want the food, you increase your keep level, but that comes with the risk that some of it is stolen - you still get more from a bigger keep than a smaller one, so what’s the problem. It’s pretty much a victimless crime.

But I see an unfair match in AW as far more damaging as it demotivates the alliance as a whole. This puts the AW concept at risk.

If you try continue to have AW match on Cups, you will continue to have this friction. If you change AW matching to be more fair without considering cups then it means you don’t need to alienate the (probably significant) community who are ok with cup dropping for the purpose of fixing alliance wars.