Titan rule on getting the best loot possible

@TGW is correct; there is no guarantee that someone in the alliance will get the rare item if you defeat a rare titan.

This is actually easy for some alliances to confirm, because they have good communication with all their members, and get a yes or no answer from everyone. It has been confirmed that it is simply a CHANCE to get the rare item. It is NOT guaranteed that an item will go to at least one person in the alliance if a Rare Titan is defeated.

Also consider this: If it WAS guaranteed, then wouldn’t a one-person alliance be awesome? All you’d have to do is save all your Titan flasks for whenever a rare Titan comes along, and you would get the mat. Hopefully you can see how silly that is, because if that were true, wouldn’t everyone do just that?

It’s RNG… rare Titan has a better chance to get the specified rare mat, but that’s all it is… a chance, not a guarantee. The only guaranteed rare mats are the ones you get from the periodic quests (such as Shrikewood, for example)… provided you can complete all the stages, you WILL get the mat from those. Everything else is just Lady Luck.

Thank you @Fizban! Yes, absolutely easy to confirm when your alliance communicates.

I have played since before Rare titans were released.

I also got it once in about 20 months of playing. But it also happened at least once that I got a different 4* mat than the “advertised” one. In general, rare titan loot is still better so I think it is worth to kill them… But of course, from time to time RNG will give you just crap anyway.

Its a bonus with a % of dropping i think , like when you try to summon a HOTM.
So its possible that no one gets it.
It never drop for me since i started playing

Yours is better, but I also went about a year and a half getting maybe one that whole time, then got two back-to-back. RNG is RNG!

I’ve been playing it for a year and a half in the alliance and so far it’s always been that when we beat rare titan, someone got it. But then, according to everything you write here, we were probably just lucky.

I read somewhere that the more participation you have on the Titan and the more evenly dispersed the scores are the better the loot. I have no evidence of that, but some people believe it.

I can say its not that way. In my old alliance i always ended A or sometimes depending on the titan color and leveling up A+ . There were too many times where i received crap and those perfoming B received better loot. I believe the only thing performance change is the tier of the loot .

For example in a 9* titan performing c gives you ix performing b gives you x and so on . Its only about slots . I may be wrong but its my experience which told me that doesnt matter the score if not only for having more chances (slots). This way we let the reward to the good hand of rng

Well if you have 30 people in your alliance, that’s 30 chances for someone to get it. Same with any other type of summons. You’re not guaranteed anything. If you do 1 summon, you have a very low chance of getting a 5* hero. If you do 30 summons, your odds are much better. But still not absolutely guaranteed.

As my alliance only has 14 members… I haven’t tracked exact numbers, but on average, only about 50% of the time does someone in my alliance get the bonus item. So… statistically speaking? It would make sense that an alliance with twice as many people would have twice the odds of someone getting the item. Still not guaranteed, though.

So here are some myths to debunk:

In summary, its like winning a raffle, you increase your chances by increasing the number of tickets (rolls) you buy. Having more rolls doesn’t necessarily guarantee you better loot. The way you can increase your chances thus is to be an alliance that is able to consistently take down the biggest titans possible.

Apologies for jumping so quickly on

… I know some people believe this to be true, but it’s absolutely not. And leading people to believe in such fairytales is essentially leading them to disappointment, and anger, resulting in even more posts here from people claiming they were “supposed” to get this or that, and didn’t get it.

Me and my alliance have faced and beaten many rare titans and we’ve never yet gotten the mat from the titan, personally I don’t know what purpose these rare titans served.

Ok, just ignore the fact that you won’t get the bonus roll. The rare titans still give you:

So even if you don’t get the bonus roll, anything up to 50 emblems is, for me definitely worth your time.

SGG should exclude this item from rare titans … or else change the message: Possibility to Impossibility. It would be even less frustrating.

So the if there is a chance to get an item but it is not guaranteed, you rather want the chance to be completely removed for the sake of being disappointed if you are not lucky enough? Following that logic… do you also want SG do remove HotMs?

Apparently, you did not understand anything of what I said … and with that comparison without leg and head that you did, nor will I try to explain, for surely you will never understand.

What else could you mean then?

If you were saying SG should just not display the item so expactations would be less high, then you should have said that instead of being rude to others when misunderstood.

SGG should exclude this item from rare titans

Exclude this item is what you said. exclude = take away.
There is no other way to interpret it… unless you were unprecise in the way you expressed yourself! But that’s not my fault!

I’ve been playing 3 years. For the last year and a half I’ve been scoring A+/A on all but a dozen or so titans when I traveled.

I track all my loot.

I haven’t got ANY 4* ascension mat from ANY chest since June 23 of last year.

I still understand it’s random and do not believe it’s messed with by SG.

I’ve finished A+ on a rare 8* titan only to get complete and utter crap, and then the next time I finish a regular 8* with an A and get rings AND an orb. The RNG is truly ridiculous 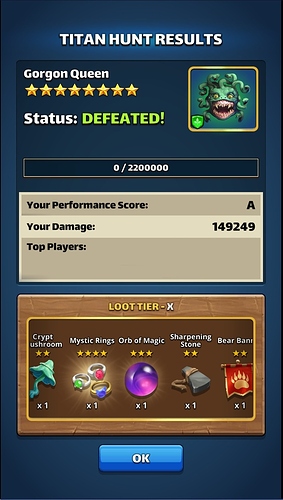