Timing out this will be another nerf 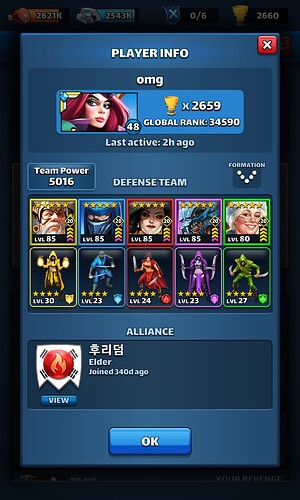 Screenshot_20220331-164413_Empires1200×2000 188 KB
Went up against this defence and i took Lord Loki and it just constantly timed out as i just constantly hit Ludwig because of Taunt and 100% mana increase the game is broken but remember if you chase a character like Ludwig they will invariably be nerfed at some point
Chadmo March 31, 2022, 4:46pm #2

I base my game play not living in fear. Chase heroes you want if that’s your thing, stop spending if the game isn’t living up to your standards. Either way people have called for a nerf of Alfrike, but it’s never happened. Mainly because slow and very slow heroes should be easily dealt with. However, if they fire…you’re in trouble.

Nerfing Slow, VS heroes is unlikely cos activation is much slower.

But you can hope.

It may happen if enough players all summoned Ludwig to form a critical mass, resulting in a disproportionate use of Ludwig in defence teams, akin to the Ferant situation.

What surprises me the most is that person is only level 48.

Paying to win with all those mat, aether and others offers are resulting in this kind of situation… Oh they won’t nerf Ludwig. He is an event hero. Even they are everywhere, they’re immune to nerf.

I won’t be surprised if Ludwig and WG actually gets a buff next time the event shows up because you know, devs gotta eat.

Not surprising. Player willing to spend to fuel his progress. Started playing probably in 2021, and summoned till he received his must-haves.

His defence troops should max within 3 months or sooner.

I’m almost at level 70 and cant run out a defense like that! It just goes to show that spending can get you what you want very early (relatively speaking)!

I came across someone at level 41 with maxed troops and an over 5100 defense the other day. it was crazy.

I´m so glad to hear that, DukeOfTaurus, I feel less alone then. Hi

I´m actually level 71, and no where near that level either.

Time out is caused by many factors and heroes are just one aspect.

Without LudwiG, we all have had timeouts with heroes that have lads of minions, healing…etc.

Nerf fear isn’t the reason to choose heroes or not…
&
MOST important… chasing a hero is only in theory, we can only do summons, which hero pops out is not I’m my control…

I won against teams like this. And lost. Also against teams with Ludwig and Krampus. Never time out. It depends on the formation of your own team and on the board. As always.

True. Not one team is unbeatable. Know your roster, know the synergy of the heroes you have.
Sometimes you win, sometimes you lose, but playing smart wins you more matches.
C. Sabina does the trick, if you don’t have Devana.
Sonia to dispel. Go in blue and yellow heavy.
It should work.