TIMEOUT! Why is there no time-out in the emblems game?

Developers! I am not satisfied that I am trying to eliminate vivica on your emblems game for OVER 2HOURS and had to exit the screen because I am too down…to say I give up when the time is past that I SHOULD HAVE WON!!!
Normally in raids you have a time out…why not in the emblems??? 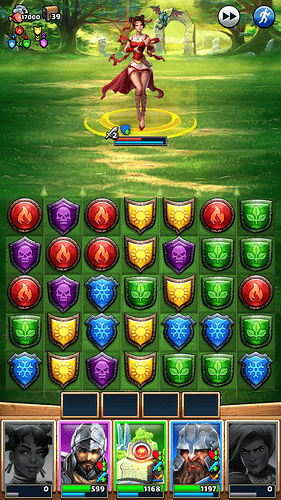 I thought that same thing when I faced them, I has Vivica and Horghall sticking around forever! And I had Gaderius, Horghall, Rigard, Melandor and Gobbler it was embarrassing

When a raid times out… you lose… are you asking to lose?

Either you are highly exaggerating, or there is a bug. There should be a 30 minute time limit since version 22 - we below. I’m going to move this to the bugs category.

Status (2019-06-13T12:05:00Z (UTC)): We have now fully rolled out the update for Android and iOS. Please update your game now from the App Store or Google Play! Please note that new features (Stronghold update and new Buildings) will be available once we have rolled out the update for all players. Stronghold Level 21 added. Upgrading the Stronghold to Level 21 unlocks new Advanced Buildings. New Advanced Buildings added. Advanced Mine added. More efficient version of Mine. Advanced Fa…

On a side note, one of the challenges to this trial is it’s heavy with healers. Your team you selected deals very little direct damage. The thread below may offer some ideas for improvement.

Full Guide => Click Here for the Guide to Trials of Fortitud…

I think he is asking for an overtime feature like they do for raids where they give you a 10% attack boost after every turn.

I think I’ll edit his post to reflect that.

Nope not exaggerating at all when I decided to stop I was going to my 3rd hour. I started after 6 pm and gave up…(deleted the game) almost 8:30 pm.
I am well aware I had no hitters but I made this same observation the last time with the time colors. In a game where you are required to use one color as a team why ALL THE OTHER COLORS? Some please but not ALL.!!!
I got Vivica way down to just a bit to eliminate then her special went back up! Naw!!! I am frustrated. I used harpoon dragon breath tornado time stop. Hey. Playing that long I figured the system picked me out and duped me. I stopped.

Well then this truly is a bug. You shouldn’t have played that long.

I once did this event with 3 healers and that was a mistake. It went nowhere. Eventually one died and then I slowly started to die too.

Going by memory, my recent one used 3 greens (hatter, elkanen, and Hansel), one purple (rigard), and one yellow (Vivica). The three greens in this case all hit and deal direct damage. They also feature a mana controller and a buff stealer. Although hatter is rare, a debuffer that hits (like Caedmon) also works well.

Good luck when this rolls around again.

Wrong application. I meant timeout. I understand it should not be over half hour but I was hoping after eliminating Boril and that vine hero…whatever the name…Vivica would not prove a problem. But I played past 2 hours settled to do her in and I had to delete the game to satisfy myself! So what happened to timeout?

There is no time out after 30 minutes, last time we had the same fun with this trial with my husband’s account. We switched because of boredom, neither of us got Vivica down and that was more than half an hour playtime.

Oh okay, according to the release notes of V22 he should have submitted a bug report in September, lol…since V22 was released in June? ROFL.

My husband had that today with…Moonhawk, Melia (both max emblems), Boril, Gadeirus, Kailani… That team doesn’t hit hard enough and Viv always healed herself. The fight was so long, he hit autoplay in the middle, then I tried…no timeout, no tie break… after many minutes Viv managed to kill the team…

There should be a 30 minute time limit since version 22 - we below. I’m going to move this to the bugs category.

30 min? Not in this game? It was better the game had crashed than I get fed up and delete it from my phone! The possibility of removing her was there regardless the hitters were low. I have a big problem with the tiles of color on board which are not useable for the present game. Those colors ran more on board providing leverage for the bosses. What’s the good in that?

Ok so then you really are complaining that the game didnt force you to lose after 30 minutes. That would mean that this is definitely a bug because the game should have a 30 min time limit. My advice to you is to remember that there is an escape button that you could have used at any given moment before you reached 2 hours. You also need to wait until you have better heroes to try this level. It’s a difficult level to beat using 5* and 4* so using 3* and 2* isnt ideal.

Nope not exaggerating at all when I decided to stop I was going to my 3rd hour.

With those heroes you could play non-stop 3 years, not 3 hours and you will end in an endless loop. There is impossible to beat a healer in trials without a hero with some damage in the special skill. Not even 5 Rigard tiles couldn’t do this; low damage and the continuous healing and def buff will lead to the same result: endless loop. Therefore you will need some atk boost after a certain amount of turns or time. But I don’t see this being implemented in the future.

Escape. Run. Why? She was almost out then the odd colors that are insignificant to play nonprofit to me yet helped her to gain. Its like being on here…if I rant I am complaining if I make a point its pointless. Pretty much no difference.

Understood. A win would be nice, a timeout is a loss…
But…again, regarding the release notes for V22, there’s obviously a bug. Uh what I hate those little creatures

most of them I produced myself, fortunately not in this game

I gave up much earlier. When my only hitter Horghall died, my remaining healers could not do any damage. So I checked my bench today. Seems Caedmon just got a promotion. Trouble only, he is also green. I’d prefer to get a blue hitter, and I don’t mean Boril. Or a red, Grazul at 3/50 was of no help.

Btw, I gave up to the stage 3 at my first trials with Viv… I didn’t have a hero with damage back then and not even the items couldn’t save me. And immediately after I got my first Elk and I was able to finish it easily. Nowadays is just routine. No need even for a single item, because I have a maxed Gafar too, which is the best hero in here. He cancel Viv’s healing, so yeah… For the new players, it is very difficult, no doubt.