Thrown out of the game

Today I was kicked out of the game what caused that I lost 20 points I used for final shrikewood Boss. From my alliance I heard that more people had connection issues.

I was just kicked out of a battle I had just started. Lost 8 world energy. Was kicked out of my first war battle this morning, burned my 1st attack team and I got zero points from a battle I ask but won.

That’s just what happened to me, I flew during a fight but was able to get back into the game immediately. What I found strange that I did not come back into the fight because the fight can actually take 10 minutes. So it can only be a bug!

I have the same Problem, iOS

Happened on my 2nd attack last war. I was furious. Game had NEVER crashed on me before that time. Been playing for months…I think return to morlovia is causing it. Note I was using Valeria when game crashed

The iPad of a teammate has suddenly restarted 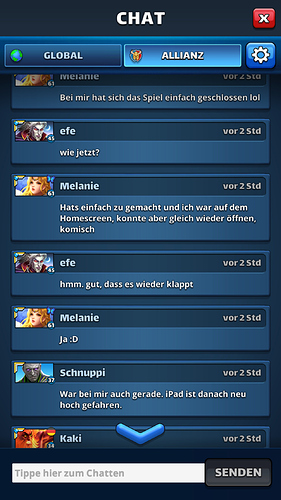 In addition to the aforementioned connectivity issues where it could cause you to drop connection (lose your World/Raid/Alliance Energies / War Flags) and your progress. The device issues and game crashing can also be a cause, and could be attributed to the following, or a combination of the following.

When the system runs out of resources, the most likely thing is shut down. But before you go up in arms about blaming your anti-virus scanner app for all your game losses, I wouldn’t go quickly uninstalling your anti-virus scanner. Mobile devices are starting to become little computers themselves, and can / will be susceptible to virus / spyware / ransomware, I’d rather have a relatively safer phone than one that just opens up my phone to potential attacks because of a website with a malicious ad / link that I may accidentally click on and one shots my phone.

Please read Forum Rules. I believe the rule that covers this is #14.