Title says it all…I was trying to get feeders from TC20 (to level up Ptolemy with 4* and 3* feeders), and I’m like really super tight on roster space right now…

Then out pops Obakan, Azlar and Marjana from TC20, almost consecutively…flooding up my roster space

I mean I’m definitely not complaining - they are my currency for Soul Exchange, but I find it hilarious that this happened right when I’m nearing roster capacity. Almost as if it was intentional. I’ve never had this kind of TC20 luck before lol.

Sometimes the RNG in this game is just too much.

Wbu? Anyone else have this kind of reverse luck? Lol

This is creeping me out (not complaining, again)

And even more surprising (or not), 1st Time that I got 3 in a row, I summoned Léonidas secondary costume and Balur same days.
Second Time, I got Aeron costume… That’s all the 5* that I got during these 4 months…
And out of 3, 1st Time there was 2 Azlar, second Time, 2 Elena…

Two years ago I was running two TC20 for a few weeks. I can remember that one time I got 5 5* heroes from both of them in two weeks. I was as scared as you are now

Those legendaries were all new to me then - they were Horghall, Vivica, Marjana, Joon and Justice.
It has never happened again.

Congrats on your great TC20 pulls!

The probability of four 5* in a row is about 6/100000. It seems to be a very small chance, but looking how many players are there, probably every week someone in this game gets his fourth 5* in a row from TC20.

Parameter… I’m willing to buy more roster space. It eases anxiety… And is well worth it in the end.

When I had been playing for almost a year I got three 5* in a week from TC20. That would be 3 in 4 pulls. Truly shocking thing was they were my first three red 5* and none were dupes. Marjana, Elena, Azlar.

I’ve gotten back to back a couple times but 3 (and then 4) in a row is ridiculous.

My 8th and 10th pulls from TC20 [four years ago now, wow…] were both Justice. Had that happen one other time where two of three were 5*s.

492 total TC20 pulls to date. I have 61 pulls queued up waiting for the next SoEx. I’ve had all the S1’s for a while now so dual TC20’s are running purely to generate SoEx food. 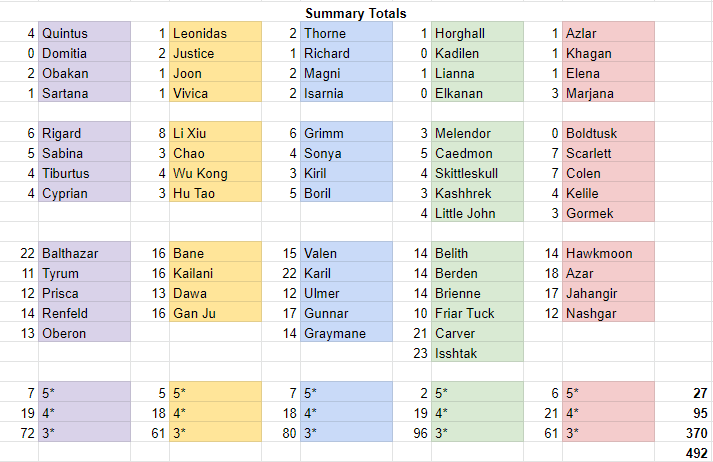 Parameter… I’m willing to buy more roster space. It eases anxiety… And is well worth it in the end.

Congrats on your great TC20 pulls!

I’ve gotten back to back a couple times but 4 (and then 4) in a row is ridiculous.