Long time reader 1st time poster. Have a decision to make - Thoth or Aeron…who gets the tabards? I’m going to attempt to attach my top 15 and dark heros. Looking for opinions in synergy /who plays well with who. Thanks in advance for your opinions. 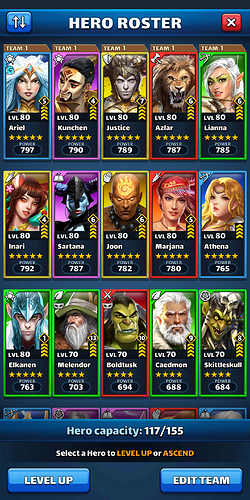 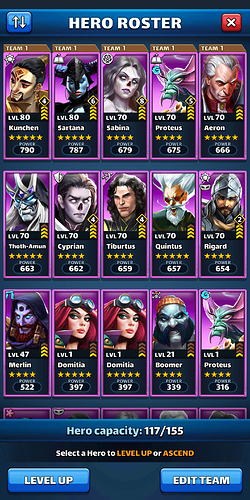 Thoth is pretty lackluster without panther

In your specific situation, I’d probly be thinkin about domitia over either one since you have no kage and no seshat and purple dispellers come in handy

I was about to say Domitia as well lol

Without Panther or Seshat, she’s a very useful hero.

I wanted Aeron real bad for a long time. However, I got Rigard’s costume and now Rigard is actually better. 4* costumes are not going to be impossible to come by, so I would hold off on Aeron for now.

Thoth? Thoth needs to be adjusted more than any hero in the game. I would take Quint over Thoth.

I feel you should first finish Merlin and max Rigard’s costume.

As you have two Kunchen +4, I don’t see a huge need for Aeron (you don’t have Lepus, for example).

As you have two Sartana +6, I don’t see a huge need for TA’s mana speed.

So if you had to make the decision right now, I agree with those favoring Domitia, for the dispel.

I would do the four stars and see if anything changes in the meantime. If it’s still the way it is now then Domitia. I would honestly also consider Quintus; it looks like your roster is very strong, so I think choosing a niche hero primarily for rush tournaments isn’t without merit.

I would max Domitia. Thoth needs Panther to be effective. Aeron is very good but you dont need a second healer now

Idk if it matters but i was under the assumption the darks are the same in both pics. 1 kunch, 1 sartana for example. But i could be wrong

Assumption is correct…one in the same

Thanks for the input e/p peeps!!

Idk if it matters but i was under the assumption the darks are the same in both pics. 1 kunch, 1 sartana for example. But i could be wrong

Totally matters. I wondered that too, since they have the same emblem level. OP should clarify.

Okay, well that improves the arguments for Aeron and Thoth. But I’d still finish the four stars and then re-evaluate, at which point I’d still lean Domitia if nothing has changed. I rescind my comment on Quintus as you don’t have the purple depth I initially assumed.