This one takes the biscuit

This has prompting me to stop spending in this game, although with others i’m sure it will increase spending.
I think this game is about to take a turn for the worse and in a big way.

For me , this is a wake up call.
They say there is one born every minute, although fairly intelligent and successful in life…i realize i am one of the naive mugs who kept buying into the never ending level up program.

I did love the game, but a shame it is being destroyed by greed, which i know and accept i partly fueled and funded that behavior.

I from here on i need to not think about the money wasted. Instead i need to start thinking about the Future money i will no longer be wasting on this endless tunnel of a game and better use my time for healthier activities.

I knew one day it would happen, i knew one day SG would do something to trigger me to change, and I’m glad they did…! 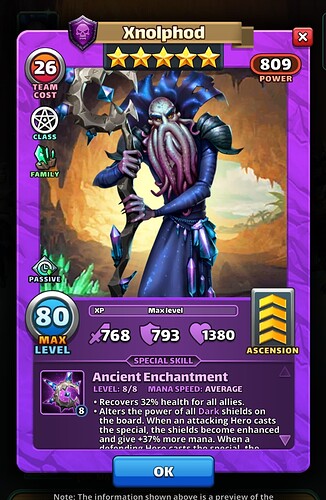 Good healing , + 20% instant mana to all allies, and average speed.

Then +37% mana on shields.
link this to the OP slayers recently released ,
Who get 100% chance of +5% mana stack 'on every turn ’ when 3 of the family in the same team.
Which i have come across a few already.!
Slow heavy hitting players with + 50% mana, + 20% every time this guy activates…lol +37% extra on shields

i see the way the game is going… They doubled Performance profits last year… they have found the model that works.

Good luck to all those that spend thousands getting all these new Heroes, just know , if you don’t spend the same next year, you will be nothing.

I just have one quick question, would you be this upset if you actually pulled that hero?

I get why you’re upset, believe it or not, but you can still be competitive without spending money or having those Heroes. if you are not intending on being in the top 100 and all of that then you’ll be fine and even some of us in the top 100 still don’t spend as much or stopped.

For myself it’s an Escape and pure entertainment and to have fun with my gaming fam. I spend what I would spend on any other Hobby in this game.

My point is you have to distinguish what type of player you want to be do you want to be ultra-competitive or do you just want to play and have fun because either way that’s what it’s all about, Being with like-minded people in your alliance and having a blast with people from around the world and in this community.

And here I thought it was A well-dressed Cthulu

This hero will boost the utility of current slowpokes; this way they can be used more in normal war and raid tourneys.

With this hero, players can consider using non mana troops if they want to: (hint hint) looking at critical and ninja troops. No idea if there will be magic troops.

Of course, hero activation depends on the board.

I get your point yah. It’s been obvious for awhile. Congratulations on seeing the light.

As long as it doesn’t take my biscuit!

Honestly, at this point it isn’t surprising to me. They essentially broke balancing, not just power creep as it’s somewhat expected, with the original Telluria. A character which has multiple specials and higher stats. It’s the trend SGG have set for themselves and will continue to do so. Their recent Q&A pretty much confirms they have no plans to balance the game, so it just depends how powerful new characters will become.

This character doesn’t really surprise. There was one of the recent Circus characters, a yellow 4* if memory serves, which I saw I thought “You’ve got to be kidding me.” Not that I would complain if I got any of these overpowered characters though!

Balance is all relative though. Because it’s highly likely our rosters are different.

A lot of the new heroes are great offence heroes which are a means to get through the tough defences you see now.

This guy doesn’t look remotely like a defence hero to me so I’m not sure what the great issue is. I don’t mind powerful offence heroes as if you get one you get a bit of fun and can have a go at tougher teams as a result.

Same as the slayers…only time I see them on defence is when I assume people are showing them off because so far they’ve not made a significant different in my raids. Far more annoying defence heroes.

So live and let live I reckon

His special only works on Dark shields, not all shields. To take advantage, your have to go mono purple on offense. Helpful in Challenge events for sure, but mono has its risks in raids, especially when you need 9-10 tiles to get that first activation.

On defense he lowers dark shields. Not too many attack dark vs dark, so I don’t think this will matter as much.

When used right he can be effective, but he is definitely not OP in my opinion…

To take advantage, your have to go mono purple on offense

It will be a fast alfrike plus a few turns.

Grimble already makes alfrike fast, although it’s conditional on having a minion summoner at tank

The problem for free player is only the defence-imba. Now is quick tournament, and Alfrike is imba, for example. (But even with her, I now in 1%).

But I absolutely don`t bother about an attack imba-team of my enemy. My purpose just my own play, to win in battles against enemy defence. This is my gameplay, this is a reason to play) Nothing else matters for me.

And others who bother with defences - are just slaves of donate) They will always pay and more pay to make their defence a little more unbeatable, from new and new attack heroes. But the truth is simple - there are no unbeatable defences, at least for now. So or you a squirrel in the wheel, or you have no problems at all. Everybody choose himself.

No plus, AFAIK. For top alliances with lv29 troops, I think this will be fast alfrike immediately.

For non-top alliances you are right, I think.

What SG should be doing is to create more 4 stars heroes with better skills instead of glorifying 5 stars even more, but no they don’t provide the money.
Would like a 4* version of xnolpold, he’s probably one of the most versatile heroes SG has thought of lately, able to be used in any game mode without much weakness. But as you know, this OP squid is limited behind a paywall.

No idea if there will be magic troops.

Any chance of something else from your crystal ball of possibilities?

There should be more mana related developments. Mana is driving current meta now.

I am waiting to see if they will drive this through to 3/4* heroes and troops.

I wonder if there will be a brand new 5* for Sand Empires this year? Any comment @BlackZed?

@HELLFIRE I tend to avoid Xno tanks in war. They will release some stronger hero down the track… Have you enjoyed no spending?

Sand Empire has the saddest line up so far. The most limited too.

It’s as if SGG doesn’t bother with a summer event because they know that players are unlikely to spend like they normally do, or even play as much, because it’s summer.

Roc still lacks a costume. They will probably give him a costume, adding on special skill damage, like what they did to Inari.

Of course they can just buff Roc straight off. Which will never happen. Lol

As for another 5*, possibly cos Xmas had Pengi.

Springvale has the most populous seasonal family. After that comes Halloween. Then Xmas. Then Sands.

Those heal-blockers are still relevant today.

Facing a team with 2-3 strong healers during rush war, a heal-blocker will help to whittle down a difficult team. Even better if the heal-block is uncleansable.

Even during non rush wars. Now that there are fast healers, and fiends are abundant, reducing healing will be helpful.

Even during non rush wars. Now that there are fast healers, and fiends are abundant, reducing healing will be helpful.