This game is fair and worth the money I have spent, and I intend to keep spending

I will say that my original intent was to express my enjoyment of the game, rather than to malign or refuse anyone the right to complain.

I think this is a great intention, and much appreciated!

And congrats on moderator. That’s a new-ish tag!

Thanks! I think it’s been a solid 20 minutes at least.

Thanks! I think it’s been a solid 20 minutes at least.

Ok, ok back to the topic at hand

So… What makes the game worth playing to everyone else, what keeps you invested? I mean, I might have quit if I’d kept bouncing between alliances.

I am drama-averse so I intentionally avoid it and have wordlessly abandoned a few alliances because of it. It wasn’t until I found Helios that I felt comfortable enough to stay. Been there about 8-9 months now and have no intention of leaving. Truly a team of great people. Plus they’re competitive enough to win most wars and take down the occasional 11* titan, so I have no need to go to anything higher or more serious.

Agree. The game is fair. The probability is a bell curve and sometimes the opponents are fierce, but the course is good and sometimes it just annoys. My only wish would be, that no 1 * things more in the chests come. You have the latest from level 20 in the 4-digit range or can produce a hundred times itself. You can get them anyway in slaughtering.

My tip, if you take the matter too personally, take a breath and take a short break. Also recommend long-term goals, as there are no brief fluctuations in the wrong direction.

To a point, I agree about the 1* items. It is frustrating to open a chest and get… rugged clothes, a sword or the tome-looking book that is not a tome at all.

as for heroes, I’m personally done with 1* heroes and have completely abandoned tc19 as it is just not worth my effort (I’ll wait for tc11, thank you).
@DJQuixo made a training camp redesign pitch that allowed for an “uncommon only” option, which would be great: Training Camp - REDESIGN PLEASE

Is your grandpa Lil’ Jon?

Thank you for your positive input. Couldn’t have put it better. I have played many games and I will say that this is the one that has kept me coming back. I am not a big spender but I do think VIP is worthwhile.
I do get frustrated with the amount of trophy losses with raids that happen when I am not online compared to the small level that you earn when online and participating in raids. However, having said that … I don’t want the game to be too easy.
I also will play until the game goes away … it is fun.

It’s one thing to be frustrated with the RNG and the grind… but it’s another thing entirely to just get everything you want. Extremes of both will lead to quitting.

I’m just trying to figure out why I can’t accept that I have enough heroes and stop pulling… haha… But then BOOM… wonderland… why sure! Oh… I have enough HOTM… but wait… a hit-3 blue guardian? Oh okay. must have. Saving arthur’s scopes…

It’s because MORE HEROES! OMG NEED MORE! At least, that’s my excuse for dropping a couple of bills a month. I may actually have a problem though. @Gryphonknight, you still have the number for Summoners Anonymous?

I used to get decent pulls, and get the heros of the month. I have done 5 pulls 2600 gems, in the past 2 months and have gotten crap, in addition to doing single pulls and more crap. I can’t seem to get the items to ascend my heros… I will keep playing but have to admit am very discouraged in pulls and gaining the items I need to ascend… I currently have at least 7 heros I can’t ascend due to not having enough items.

With the new game play where our Heros can be upgraded through Talents and we now have Quests based on the particular Talent, you need to have more heros to make up the numbers in the Talent Groups. Makes for a more exciting play

@Gryphonknight, you still have the number for Summoners Anonymous?

My sponsor quit when they realize they could level a Proteus to 4*+19 and Wilbur 4*+19 to go with leveling Their Rigard to 4*+19 and Wu Kong 4*+19. All they had to do was successfully summon them first

Every single time I think Atlantis summons / map can not get more insidious, marketing breaks out a new technique.

Cat in the Fedora, er, hat

Rumor has it Cheshire Cat already moved 3 million in gems on the futures market between the art, Alice in Wonderland fans, kitty fans, players with “newitious” and players who heard anti-Guinevere hero and misheard it as anti-Guacamole hero.

This post is currently the Top-rated post of both the week and the month via organic metrics, and naturally sorts to the top of those views: 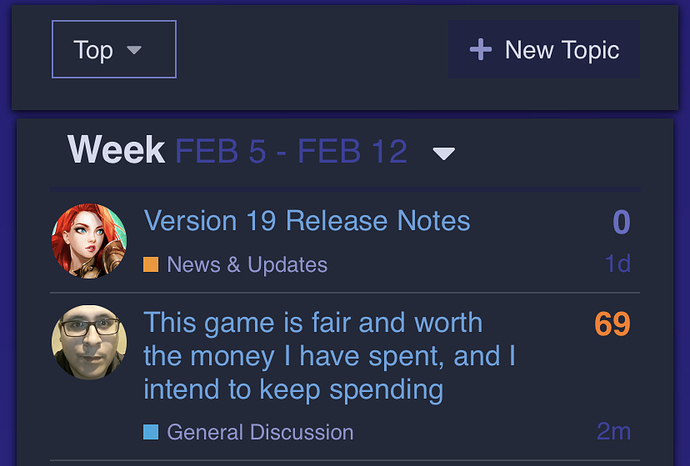 Given the organic performance, and in the interest of avoiding the appearance of biased perspective in pinned topics, I will leave it alone for now, and reconsider whether it should be pinned for longevity if/when organic activity has subsided.

My sponsor quit when they realize they could level a Proteus to 4*+19 and Wilbur 4*+19 to go with leveling Their Rigard to 4*+19 and Wu Kong 4*+19. All they had to do was successfully summon them first

Rumor has it Cheshire Cat already moved 3 million in gems on the futures market between the art, Alice in Wonderland fans, kitty fans, players with “newitious” and players who heard anti-Guinevere hero and misheard it as anti-Guacamole hero.

I was actually planning on picking up a Cheshire Cat myself. Rumor on Line is that his abilities are so powerful that he’s going to totally change around enemy defensive lineups. I also heard that he’s a world class deep buffer, but my car paint job really doesn’t need any work, so that part interests me less.

This thread has now completed the descent into utter silliness and complete nonsense.

It’s oddballs like you that keep me, a normal not-silly person entertained.

It’s because I really enjoy your replies, and am hopeful to keep them coming!

Said with pitchfork in hand…NERF!

Now, I would like to complain about complainers who complain about people who have positive things to say about this game. I can neither confirm nor deny not confirming not denying that I may or may not admit to agreeing with this sentiment. Allegedly.