That picture totally makes me want Ferant totally nerfed to a sponge noodle!!! Ferant scares me and he just has to go… I mean just look at his face all smiling and stuff. Nerf Ferant and any hero that scares me! Nerf Ferant Nerf!!!

I see that there were a few that used Elizabeth and Isrod instead of Ferant. Hope they got kicked from the alliance

Those players were mocked for feeding their Ferrants away while chasing Wolfgang/ Ludwig/ Quenell.

Agreed. Jade was clearly broken and no one listened to Beta. Then she was released with all that power. I mean come on. It’s so obvious. In only 13 tiles you can do what C Kaidlen does in 8 and instead of getting minions when you dodge you get nothing but cut mana. Wow. I mean maybe they should just make her slower.

I tried to defend ferrant against nerfing due to older & new heroes launching & he doesn’t need it!!! Wow, I would love to have that roster, but, I’m not that lucky…lol.

Breathe everyone, Zagrog comes to rescue you against Ferant

New HOTM Released for March 2022: Zagrog This thread is for discussing strategy related to Zagrog, as well as your thoughts on him. NOTE: Zagrog will officially launch at 2022-03-01T07:00:00Z (UTC) (07:00 GMT). Zagrog will NOT yet be available when this post initially launches. Zagrog Rarity Element Class

Ferant has made all other riposte heroes in the game = FOOD !

The rest I agree with though

though Ferant holds it powerfully against the 5*s too & I love my Sif, for sure wouldn’t feed her to him

anyone have the best emblem path for ferant please … ?

I went mainly all hp

I went balance… so, he survives long - to do his thing 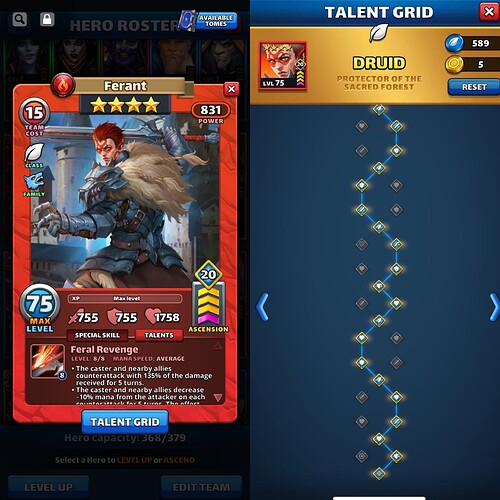 Praise the Heavens! The developers at SG have listened to my whining and nerphed Ferrant! This is obviously because Ferrant is super OP compared to weak heroes like Milena and Zuri (who all needed buffs) and nothing to do with my lack of skill in playing the game!

You just bumped up you own 20 day old thread. I say mods merge this thread into oblivion with the other ferant balance thread

I don’t know if that even matter, the mana cut is still the annoying aspect of his skill

YAY! Another Nerf of a hero most have!

Good thing they dont nerf the heroes that need it…looking at you Ludwig with 6 turn Taunt (undispensable at times) 84% defense and 100% mana generation for nearby allies.

:hands SG shove to dig their own grave:

Ludwig doesn’t cause many problems in defense.

In offense I agree he is OP

I know right. 100% mana gain with taunt nothing to see there

I’m still very concerned that Zuri is still weak despite her 2 buffs. I suggest they look to buffing her again just before next Circus portal comes about…