I can proudly claim that we are just about in the top 10! 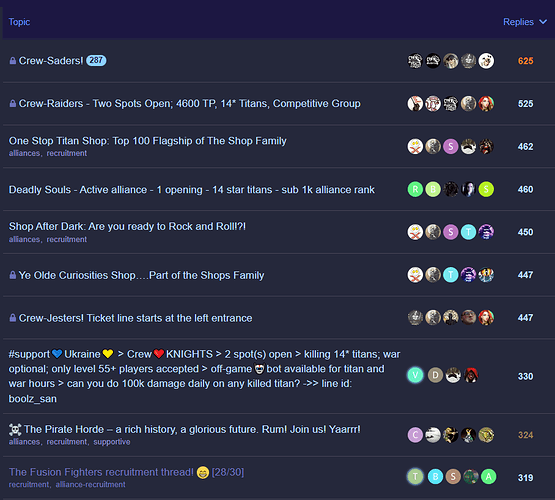 I never mentioned anything about leaderboards!

Check us out at Fusion Fighters.

In my position as the leader of this alliance I feel I should announce that we have an in-house Kale Research Institute available. This is where we research new ways of using kale against our war opponents!

After kale itself we have so far concocted kale donuts and kale pizza to throw at them - kale doesn’t travel very far. And in this war a researcher at the Kale Research Institute came up with… kale quiche. I think it was a resounding success. Because we won our midweek war!

Looks like you found 30 kale eaters. Your posts are cracking me up!

Can you kick out the least liked person so I can come in? Just kidding… but seriously, let me know.

It’s my story and I’m sticking with it!

Are you an ExFor fan, by any chance?

Will keep the thread here updated. We may have a spot or two opening up in a week or so.

Are you an ExFor fan, by any chance?

Unfortunately not, because that reference went flying over my head.

I kept it vague on purpose

So I recently discovered that in certain threads there’s a limit to how many consecutive posts one can make. (Twas five for anyone wondering.) Now… imagine if this thread had a limit for consecutive posts. I’d never be able to do anything for recruitment purposes!

Come join us at–

We’re full at the moment.

I’ll just go and sit over there. Twiddling my thumbs…

I thought the limit was for all threads… Hmm you learn something everyday.

Too bad you guys are full. I’m looking to switch. Can’t you kick the idiot out?

We’re one win away from completing the biggest item of my E&P bucket list. It’s now four consecutive war victories!

One step closer to E&P retirement!

With the hard work of the Kale Research Institute here at Fusion Fighters, our deployment of kale-based weaponry has been a success thus far. “Rubbish!” I hear you cry? I believe we are a very science based endeavour: