How many CF2 pulls do you have to have such a hope?

Should be enough for 11-12 coin pulls after finishing the event, plus I’m sitting on about 8500+ gems. I also have almost $15 USD in Google Play credit, but I figure if I haven’t gotten what I want by the time I do 40-something pulls with my coins and gems, it probably just isn’t my event. I want to save my Play credit for Black Friday in hopes that the November purple HotM is good.

Candy is a three-star and D’Andre a four, so I’m thinking it’s not unreasonable to hope for them.

I would really love to upgrade my war tank (currently using cb Khagan!), but there don’t seem to be any tanks here.

Unless you are coordinating colors, Khagan isn’t a bad tank. When he fires, he hits hard. I think I had trialed him as tank (no CB, but with emblems) in rush war and he can be deadly. But if you are looking for a tank specifically, nothing here.
But likewise, I’ll mention that in rush wars Raffaele could be used as a tank (if you need to switch to blue) because he has the monk resist ability (occurs so often when I’m trying a mana control special) and with him firing all the time, he’ll keep his health up pretty well. Normally, healers aren’t good tanks, but if you surround with some heavy hitters (like Khagan), the battle could end quickly if the boards are less than optimal.

I have been using him for all wars. He’s not a bad tank and probably I should put Kunchen back in as tank, but I have used him for years and I’m just tired of seeing his face!

I usually use Clarissa, but not too useful in war equalizer… so I’m kind of stuck when it comes to purple tanks. Currently with rush I’m running Chakkosrot who took Quintus’ spot. Actually, the only color I’m somewhat fine with is yellow (Onatel or Drake). Red, my choice kind of alternates between JF, Khagan, or Elena. Blue, Richard or Krampus. Green… MN. So I’m not really flush with tank choices either.

Work with what you have, that’s the name of the game!

interesting: Theobald caught my eye for the Green reflect, however it IS situational. I have Ursena for Yellow reflect, and I don’t use her that often on offense - most defenses are still rainbow, and often that one Yellow is a healer/buffer, so there’s nothing to reflect. so IDK if he’s worth 15 5*

as others have said, Zuri and Raffaele if you really lack healers, though personally I would make do with my Kiril / Azmia / Lady Wooly / Vivica (20 5*s IS a steep price!)

Should be enough for 11-12 coin pulls after finishing the event, plus I’m sitting on about 8500+ gems. I

Nice. Here’s hoping the RNG smiles on you! I’ll have 3 coin pulls and 1500 gems-both of which are a lot for me.

Now not all level 90 plus are the same, I’d probably be one of the weakest level 90s out there in terms of roster.

Now I’m curious about your roster. Care to show me yours? I can show you mine too.

HeroPlan.io is a tool for tracking Empires & Puzzles heroes. Update your profile, find your best heroes, build your teams, and plan your next moves.

Maybe only thing not updated is silvaria is maxed and +20 now.

Anyways level is such an arbitrary requirement, level 90+ when I see many people 70s much stronger… Some lower than that of course too, but really not uncommon for 70s to be better due to spend levels.

Still, it’s all relative. I’m at level 87, which means I’m what 3 months from 90? If you’re looking at 5* heroes as a measure, mine is worse (by pure numbers). I’m not likely going to catch up to you in that time.

It has been updated since the screenshot, namely Kara is completed. But during wars, I depend heavily on my multiple 4 star heroes and stacking 3-1-1.

I depend on multiple 4* too while 5* may be more there aren’t enough healers, dispellers, cleansers to ever be enough.

this is a great point, level only means one has been playing the game longer. It says nothing about the state of the roster - or even of troops. after all, spending is still probably the best predictor of how good a roster is (or at least, the available heroes = spending won’t guarantee hero levels

) and even then, spending is no guarantee either

Level should give an indication of troops, low or moderate spenders don’t seem to focus on troops, while the map grinding is the best source of free troops… Although RNG does mess with you there too, the only reasons I don’t have a set of 29 Manas is it took 2 years 3 months to get the green and then magic troops came out and I decided I should max that instead of Mana so a focus shift with a long term view… Sure I could have leveled that green Mana by now but the magic troop is at 15.

level may give an indication of troops, not always of course as you have pointed out - RNG is gonna RNG. I’m also curious if there are long-term players out there who’ve ignored their troops for one reason or another.

I’m not familiar with all the deals and items in shop, so don’t really know what is purchasable to speed up troop levelling. I do know ETTs and gems can be bought, and used to summon troops, so there you go…

Oh I agree they can still be bought, I just don’t see happening too much outside of the largest spenders and those in top alliances. From my experience in 100-1000 alliances people spend on heroes, and in fact that can cause them to neglect troops cause they don’t have the resources to feed them.

You have a nice roster, congratulation.
I am level 82, and
I dont think I will have as many maxed 5* heroes as you have in the next 6-8 months.
Here is my actual 5* Roster: 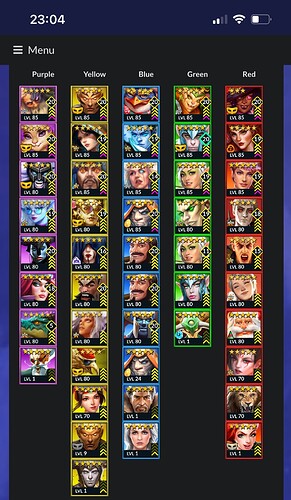 The Beta Beat (V50) – Tower of Styx, New Season 1 Costumes and Costume Quest -- Sharing the Big Picture on What's Going on in Beta

High level information about the Tower of Styx:

I think it is interesting. Generally speaking there are enough different types of heroes to provide what you need for every class. It obviously was worse before when healers were almost all clerics. I remember that was an issue when it comes to the trials and couldn’t find a healer for certain class trials. It’s better now, and I’m just using healing as an example.

I bet newer players would have issues, but those who have been playing for a while shouldn’t find it too difficult… of course, I hope they handle costume and non-costume versions as separate.

Agree that a certain point, chances are you’ll have a roster deep enough to handle things, so I should think this approach works best for mid-tier players and newer. That said, I think it can also apply to more experienced players, which is why so many events use time to factor into scoring and loot tiers. I guess for me the idea is to compete at that level, you don’t just need serviceable hero options in all the limiting aspects (color, class, etc.), you need good ones.