I have just tried it…
Pull until Kenjiro and then pull eith closed eyes.

but it was just Gramps…

You should have FaceTimed.

Yes, I will do next time.
With my luck we will be able to pull for Season 4 costumes at that time…

I’m at 82 Underwild tokens and assume that I will never again pull in that portal. The drop rate of coins is so low I’m not even bothering with this event.

Congrats on your Fogg @akionna!

Are season 1 heroes under-powered? No longer relevant? Can they compete in global top 20?

I would say that this somewhat ties into a S1 relevance discussion as ftp could be the group most reliant on S1 heroes. There are maybe a handful of top 100 alliances that would take a true ftp player (“maybe” because I don’t know all of their recruiting requirements).

I see these as the biggest roadblocks for a true ftp to join a “typical” top 100 alliance:

Troops - multiple high level troops, a longshot to have these.

A couple years ago, I could see an avid ftp working their way into a top 100. Not so much anymore.

Moving the conversation here again, as I don’t want to go off-topic in Jeffrey’s thread.

As someone who is a low spender* that usually plays in a top 100 alliance, I think it is nice that my alliance is in the top 100. However, I don’t think it’s a big deal whether one can become part of a big alliance.

For me, I just want to continue playing with my friends who happen to prefer playing at a high level.

I also like to see what I can do with my roster, which is definitely not the typical roster.

*I try to be no-spend except I buy Share the Gems for my alliance.

Jackal but wonder what its stats emblemed for def/HP would be? 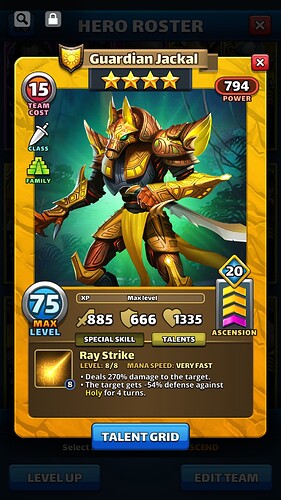 I think he’s better that way, giving him more attack won’t improve his damage, but like this he has much more defence.

I think the missing part is sending your phone to @akionna 's kid, let him hold it for a full hour so some of his good luck will rub off on it

I’m at 82 Underwild tokens and assume that I will never again pull in that portal. The drop rate of coins is so low I’m not even bothering with this event.

ditto… I’d rather spend my WE finishing Kalevala or the S5 missions, than bothering with Underwild and with Valhalla!

I’m at 70 Underwild tokens myself, it will likely be several months before I gather enough, I only farm Underwild now when I am trying to finish a monster chest AND when Kalevala stages will not be enough to open the chest

Here you go! I went Attack path because my alliance only goes up to 6* Titans anyway, so Jackal can survive well enough without boosted defense from emblems 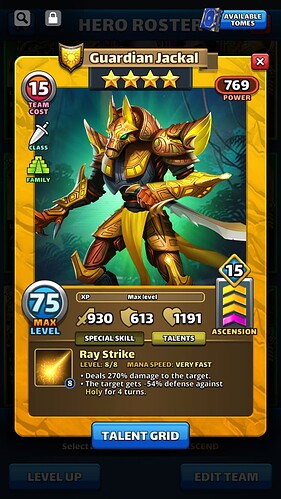 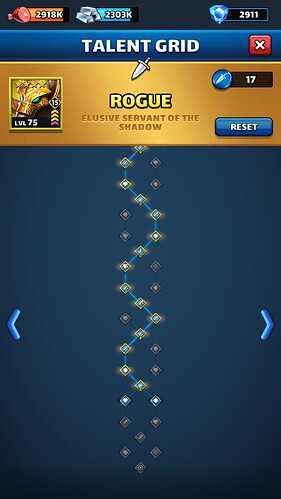 Thank you @Muchacho and @sleepyhead for sharing your Jackals.

Hm, so it seems that A-path is better. Maybe I will reemblem mine.

I was thinking 108 HP and 36 D points are maybe a slash attack in PvE or something. Given he is mostly a titan specialist for me, he is likely dead no matter what on the second hit from a titan.

That being said, if he’s dead anyway and you’ve used the resources is it worth the additional resources to switch? Depends on your roster, but on mine it would be a lower priority as I am essentially doing all that to gain 75 A points

I don’t know, one day I want to reemblem him, another day I think it’s not worth it, I can’t decide.

Right now I don’t have extra food, so won’t reset his emblems, but maybe one day…
I think that it’s better to have extra 75 points of attack than extra 108 of HP.

I would agree that it is. It is just something like a “rainy day” project of someday when there maybe isn’t something else to do to me.

Rogue emblems are so hard so come by in my world too. I actually have three holy four stars (Jackal plus Griffin and Bellerive) arguing about them plus the rest of my roster. I just finished c. Domitia who is also hungry. If only I could
Covert those 3000 sorcerer emblems to something worthwhile!

I feel you, I have too many Paladin and Sorcerer emblems… not enough Rogues and Monks!!

I am “bit” short only Monk, Wizard and Barbarian emblems.

I have plenty of Rogue… (Almost the same as Ranger) 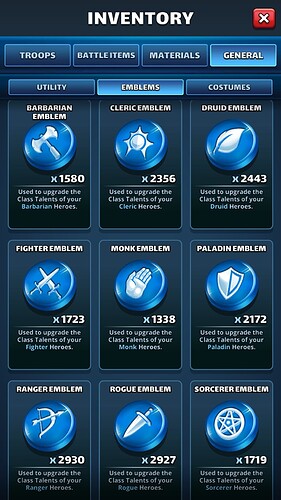 thank you for sharing, It is cool to see that someone is lucky enough in this game to get cool heroes.

Does anyone want the kid for the summer?

lol sure, it will be worth it, his job can be do the pulls and train my kids how to. We can send him to camps with our kids and join us an all family vacation.

But really congrats, I love to read the interaction and how things develop.

These numbers are crazy! Do you have emblems on all the heroes you use?