What’s this all about?

IMPORTANT: I wouldn’t get too attached to any information from Beta — it’s not unheard of for entire portions of heroes or functionality to be removed, reworked, or radically changed beyond recognition.

(These were tested in earlier Beta versions. These might come back to testing or not…)

Staff have not yet released any further insight into the future V50 Beta testing content.

I’d love to hear thoughts on whether this information and format is useful, and how you’d like to see information presented in the future. Any thoughts or ideas?

Please try to limit discussion in this thread mostly to the information sharing process and feedback on the thread, so we don’t end up with a jumbled discussion of a bunch of different heroes — use the threads linked above for each individual hero to discuss more.

Awwww no Tarzan. No Baloo. Thank you

Great effing job on introducing 10 more Legendary heroes at the expense of adding ZERO 3* and 4*. Amazing work, if you’re looking for chasing away the remaining players of the game.
Seriously, wtf?

Awwww no Tarzan. No Baloo. Thank you

They look like extras from the set of “Planet of the Apes.”

Something is whispering me that Hetepheres is this Kufu-lady. Am I right ? 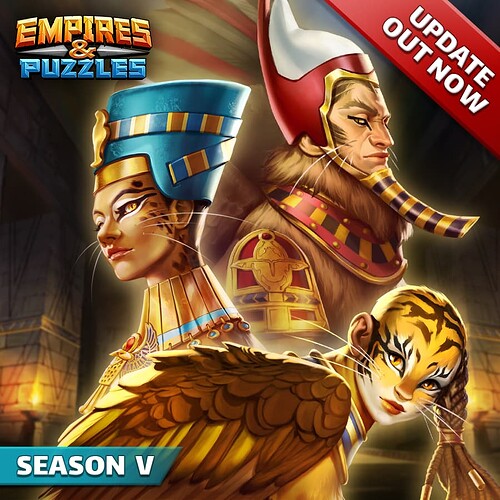 You made my day!

Yes, this hero on the left is Hetepheres.

Here is the topic for her:

I think the ones from V54 have not been available yet.

Which I guess is not a surprise by now…

@PlayForFun Boss, can you check with Petri and see if we should expect a sneak peak for 2023? I think we had this for both 2021 and 2022, which is helpful to a certain extent. Many thanks.

wow, so this entire beta is just new 5*s?

really does NOT interest me at all, I usually gloss over the 5s because I get so few of them anyway. When I do get a 5, I can just check its thread then…

I have already asked about Sneak Peek of 2023.

It will arrive by latest end of the next week.