Thanks SG u did it again --> Destroyed slow heroes

Slow heroes are bad in this game. If its not fast its bummer. Then they introduce vf war that was stupid (they could just reduce amount of mana needed by default).
Now they removed hidden 20% defence up for def heroes “becouse of limit breakers” and now slow heroes are even more useless in defence. Even top ones.

p.s. once each player will have 20 LB heroes it might be better, but thats few years from now. Stupid, shortsighted…but its ok just to create 50 new fast heroes each month, this will improve game

Actually… Is there any PVP that isn’t starting board dependent nowadays?

Fast heroes are strange at the moment as well. Some are like Lianna, marjana, Kingston… Damage only or damage + some ailment/buff.

Others can define the match. Hannah, Frigg, Odin.

I think the board dependency is just another consequence of hero power disbalance.

Have to disagree here.

My only slow defense isn’t doing any worse since they removed the 20% stat boost.

On offense most newer slow heroes are good to great, but also older ones either with costumes or high emblems are still useful. Probably a third to fourth of the heroes I use every war are slow regardless of the rules.

I mean I can understand that someone doesn’t like slow heroes, and some are just “useless” outside rush or at least extremely outdated. But with all those new extremely hard hitting heroes in pvp or war defenses I’m relying more and more for slow heroes, because unlike my fast or very fast they can survive when the defense fires and are powerful enough to counter whereas if I take some only fast heroes I’m extremely board dependent. If the start board isn’t good I’m most of the time dead, when the defense is charged.

Slow heroes are dead! Or aren't they? General Discussion

In the forum there are a lot of threads that slow heroes are dead, obsolete, too weak and need some buffs. There isn’t much love for them. This post is not to convince anyone to use slow heroes. If you don’t like them, don’t use them. Everyone has an unique playstyle and likes different heroes. Diversity is good for the game, would be extremely boring if everyone uses the same heroes. Here I try to bring some love to the most unloved category of heroes. First of all, slow is not slow. If you …

Slow heroes are bad in this game.

Too broad of a stroke. Mother North - pretty darn good, regardless of slow speed… and there are others.

I might agree that on defense they re not so good, unless is VF rule, but on offense they have their value.

My defence has : Slow-Fast-Average-Average-Ninja & I get same results daily…. My cup count holds upwards of 2650 thru the day…. 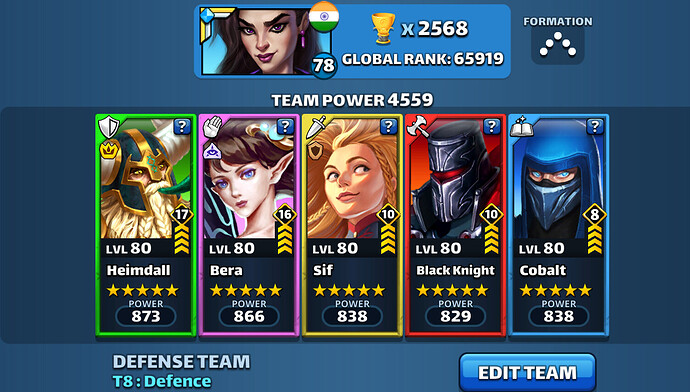 Complaining without any sound rationale which constitutes majority of all complaints on this forum, simply sounds more like “Venting”
rather than
A smart - pointed - clear issue being highlighted = SG won’t pay much attention,
bcoz
they have done their study / homework about whatever they have / will introduce…

Again. It’s not about hero speed. It’s about balance. At my opinion.

But something you can’t adjust in battle is hero power differences.

Formations and hero positions are also vital in raids.

Many things can interfere in successful raid defenses but it’s not about just mana speed. I think that’s the smallest detail.

Disagree. When do you guys ever stop whining? Every time the Hotm is average or slow speed, people complain that they aren’t fast. The recently released heroes are nicely balanced between fast, average and slow. Just looking at the heroes will tell you that, but complaining is just so much easier. As for VF wars - love them!

Another rehashed topic of the same old variety. There are plenty of non “useless” slow heroes. If I got to pick five heroes for a defensive team they probably won’t be slow.

I am intrigued that people hate slow heroes because they’re too slow, but ninjas 3x charge is also OP.

Disagree. When do you guys ever stop whining? Every time the Hotm is average or slow speed, people complain that they aren’t fast. The recently released heroes are nicely balanced between fast, average and slow. Just looking at the heroes will tell you that, but complaining is just so much easier. As for VF wars - love them

Agreed. Not everyone has to be fast.

Even the recent and older heroes balance is not good nowadays, I love VF wars.

In the Ninja Tower, going mana route for your blessings, can make slow heroes great

Seriously, I have a non-costume Azlar and he’s more useful for me than Reuben.

As for VF wars - love them!

I have been playing for 4 years, having a big roster.
I love many of my slow heroes and using the best of them often. That including some of the S1 slow heroes.
I agree that for many purposes in game, fast heroes are better.
But then the specials of a slow hero, will often complete a faster team in synergy.
And for rush tournaments and wars, most of them are obviously shining…
Slow heroes have not been great for raid defense meta in a long time, but now having new war formations, I’m seeing some slower heroes doing great again in the right lineup and formation

People who think only fast heros are good only know one way to play the game. Expand your strategy and roster and you can play well in any situation. I never leave diamond and my whole defense team doesn’t have a single fast hero. One average and the rest slow and v slow.

I use slow heroes on offense (a few) and in a lot of instances where I’m working hard, I have fast heroes that just sit there charged for more than a few turns. (that is obviously contingent on the special). This is due to me preferring tiles over brute force specials for the most part on offense. Regular defence? I use my best credible working team. I mean I could sneak in a very slow wing like Alfrike, but prefer a fast sniper.

When do you guys ever stop whining? Every time the Hotm is average or slow speed, people complain that they aren’t fast.

Feels like you are reading a different thread to me… OP posed a question and the answers I read were a balanced summary of useful slow heroes and situations where they’re useful or better than fast heroes.

For my part, slow, average or fast I like to bring heroes together with good synergies in specials and functions. I do think SG find it harder to balance slow heroes and should address some of the S1 obsolescence, for what it’s worth.

Slow heroes are far from useless. They require more thought in using them, but I have two slow heroes on my defense (both are S1) and I hold well in diamond, usually above 2500. There are times I gain more cups from being attacked than I do from attacking.

I also regularly use 1 or 2 slow heroes in just about every raid attack.