Thank you for the 5-star Holy aether and other improved POV rewards!

As someone who doesn’t buy the pov it’s not changing much for me personally, but I still think it’s a welcome change. The harvesters were rather useless, so pretty much everything else instead is an improvement.
I don’t think people who don’t buy pov will pay for it now, it already was one of the best deals in the game, so the majority of people not buying it was probably f2p anyway and won’t change. And those who bought the pov till now, will now get even a better deal.

I think one of the better changes in the last time.
And of course I wouldn’t mind if I get more things on the free side but it’s not worse than before so why shouldn’t I be happy for those paying getting something better now…

I’m glad they added the aether reward. It’s just the wrong colour for me so i’m not buying it

I like the new reward of the VIP pass, but I feel bad for the people who don’t buy it, they should have given some 3* ether in free reward

Not happy, it should be the first reward rather than 49th sigh.

harvesters were rather useless, so pretty much everything else instead is an improvement

Agreed. I stopped buying the pov, then eventually i only bothered getting up to 48 for the ascension mat… But now… Getting to 50 seems like i should… And buying the pov… So… They are trying to make money and I think they sold me on it. I’ll buy it towards the end though.

Yes those harvesters are worthless. Was going to use one recently during the Atlantis event but then I read the fine print and it said I couldn’t use it during special events like that. Very lame.

except that the only event that boosts loot is Atlantis, and unless they decide to have the same perk for whatever the S4 event is going to be and then add it to Valhalla Forever, i don’t see the point of completely nuking the harvesters from the game. i personally liked them (most of them, anyway), but i can appreciate that more people would prefer the Aether III in that spot.

Yeah, I agree PoV has received nice update, with better items. On the other hand mostly on paying side only. Still, it’s $10 and that’s great for value given.

I do appreciate the boosted loot, so thank you, SG! I agree that the recruit and iron harvesters are mostly useless. I have too many recruits to deal with as it is, even with two TC2’s and two TC11’s running 24/7, and craft tons of items I don’t really need to just burn off iron. I do, however, really enjoy the item harvester. With the shortened AR, I find myself a little short on nuggets and backpacks at times. I just pick a day when there’s nothing much going on and autofarm 1-5-8 with an item or omni harvester all day while working. That takes care of any shortages I might have.

It’s a nice improvement, but from the Free side, nothing has changed other than swapping a 3* aether for a harvester. I guess it makes PoV worth buying if you spend money.

oh yeah changes are always that

I still have 90% of all the harvesters i’ve ever gotten.

So the aethers are an improvement, the additional EHT are kinda nice too, will bump me up to 30ish eht by springvale.

only event that boosts loot is Atlantis, 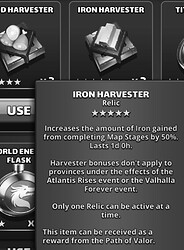 How is that an improve? They are all payant so a further gap between f2p and others.

$10, based on the economy established by the game, is a good value for the aethers, ascension mat and pulls. I don’t begrudge people who pay money… They should get an advantage… And if you can’t afford $10… Then don’t complain.

The biggest interesting change to me was the 6 EHT’s. That’s incredibly generous for SG standards

I did use some Omnia harvesters before as they are essentially micro Atlantis rises. The recruit harvester is the most useless one of them all

I noticed the rewards were slightly better. Nice, sometimes it nice to receive something that isn’t a spit in the face from them. Not enough to make me buy it, tho. There was any upgrade to free POV?

Alas,…be happy with some improvements…Aether over Harvesters, I will choose Aethers and I will be looking forward to seeing those rare new Tomes replacing some other useless stuff as well!